In Johnson circles, three lines each passing through the center of one of the circles and the $2$-wise intersection are concurrent.

The problem is from Kiselev's Geometry Book I. Exercise 591:

Three congruent circles intersect at one point. Prove that the three lines, each passing through the center of one of the circles and the second intersection point of the other two circles, are concurrent.

Here is a picture of the problem: 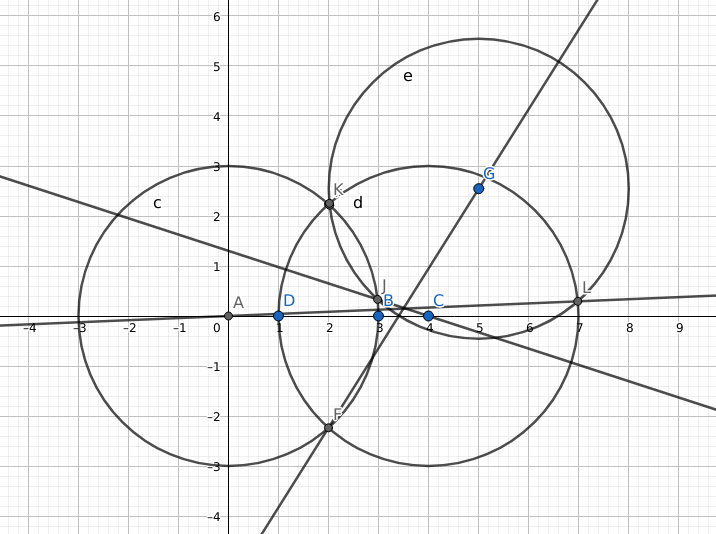 I am not sure how to approach this problem. I think algebraic method is the way to go, but my attempt was too messy; basically, I used the equation of the formula, picked up a point they all intersect, and tried to simply manipulate all the formulas to prove the statement. Not only was it arduous and fruitless but I also wanted to have (possibly) a more clean and intuitive solution.

[Edited] I was informed that this is the Johnson circles configuration. I have followed all the properties listed in the Wikipedia, but still I was not able to prove this. I suspected that the intersection of the $3$-intersection and $2$-intersection will cross each circle's center, but it was wrong. I also attempted to prove that the resulting point from the concurrent lines is the excircle or incircle of one of the triangles (Johnson or reference), but it does not seem like it.

I would really appreciate if someone could help me on this problem. I think there should be a solution using a basic geometric method.

To make the question answered, here is the solution; each such line passes from one vertex of the Johnson triangle to the other homothetic counterpart in the reference triangle. The homothetic center should be on each line, hence the lines are concurrent.

Not the answer you're looking for? Browse other questions tagged geometry euclidean-geometry analytic-geometry circles or ask your own question.

4
Longest chord inside the intersection area of three circles
0
Given three concurrent lines $a,b$ and $c$, find the circunference tangent to $a$ and $b$ and with center at $c$
1
How far apart are centers of a set of Johnson Circles if the centers are equidistant?
1
Locus if three lines are concurrent
0
Prove that the polar lines of three points outside a circle $C$, are concurrent if and only if the three points are colinear.
1
The lines that connect the intersections of the three circles around a triangle meet at the same point
0
Relation between radii of incircle and excircle of a triangle : $r_{1}^{2}=d^{2}+2r_{1}r_{2}$
1
For a given circle, prove that the lines of intersections by circles that pass through two given points converge at one point.
3
Prove that 5 lines are concurrent, and find the expression for the position vector of the point they all go through.
0
Finding the intersection of three circles?