Calculating intersections of a "2D cone" and segments 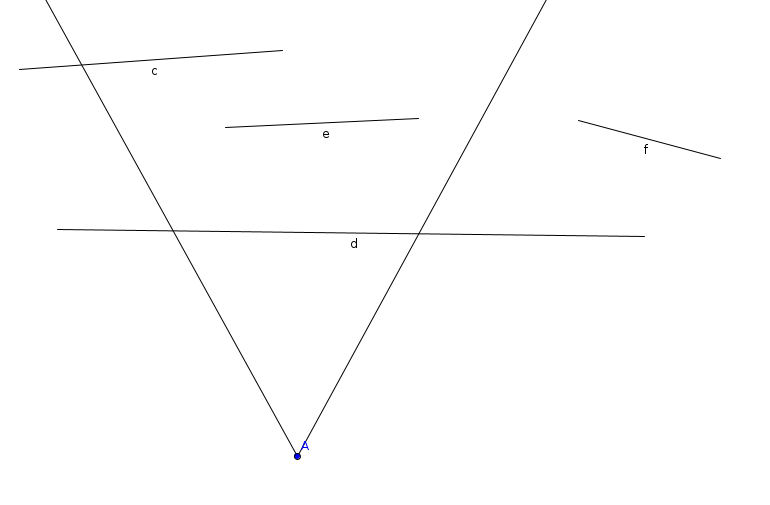 The "2D cone" with origin A separates the 2D plane into 2 regions, inside and outside.

Consider the 4 representative edges $c, d, e, f$ that encompass all intersection cases (assume that an edge aligned with the cone's boudary is equivalent to $e$).

An edge is either fully inside the cone, has one end point inside and one outside, has both end points outside but a subset of its interior is inside, is fully outside.

With this setup here is the practical problem:

Given an arbitrary cone, with inner angle less than $\pi$ and an arbitrary segment, use nothing but vector algebra to find the 2 intersection points. If no intersection is possible, identify it somehow, encoded numerically in the 2 points. You can assume the directions $d_1, d_2$ are always given to you in clockwise order.

My current approach is to, grab the 2 end points of the segment, check their angled sign relative to the window (which is done through the dot product of 2 cross products). With the signed angles of each end point I identify whether the point is inside or outside the window. A point is in the interior iff $0 < \sigma < w$ where $\sigma, w$ are the signed angle of the point with respect to the rightmost edge of the cone and $w$ is the angle of the cone.

With that information I can decide which of the 4 cases I am actually in, then make the decisions with that assumption.

e.g If only one of the 2 endpoints is in the interior I know for a fact there is a unique point of intersection with one of the 2 boundaries, so figure out which one it is and then I know the 2 intersection points.

This is overly convoluted. I am curious if there is a more unified way that can find both intersection points without having to create a big tree of if else's

The only case not accounted for here is division by zero, which occurs when the line segment is parallel to one of the boundaries.

Not the answer you're looking for? Browse other questions tagged linear-algebra geometry intersection-theory or ask your own question.

2
What is the solid angle of the intersection loop between a cone and an off-axis sphere?
0
Find cone-plane intersection points in a construction
2
Point inside right circular cone
1
Intersecting Angle between 2 Line Segments
1
Given a circle of diameter d inside a square of side length d, what is the length of a rotated diameter when extended to the square?
0
Equation for surface of intersection between cone and sphere
1
Cone projected tangent angle
1
Rotate corner of triangle around opposite edge
1
On the Equation of the Ellipse Formed by Intersecting a Plane and Cone
0
Distance / Penetration distance of segment to/in a cone