Let $k$ be a positive integer. A spectator is given $n=k!+k−1$ balls numbered $1,2,\dotsc,n$. Unseen by the illusionist, the spectator arranges the balls into a sequence as they see fit. The assistant studies the sequence, chooses some block of $k$ consecutive balls, and covers them under their scarf. Then the illusionist looks at the newly obscured sequence and guesses the precise order of the $k$ balls they do not see.

Devise a strategy for the illusionist and the assistant to follow so that the trick always works.

(The strategy needs to be constructed explicitly. For instance, it should be possible to implement the strategy, as described by the solver, in the form of a computer program that takes $k$ and the obscured sequence as input and then runs in time polynomial in $n$. A mere proof that an appropriate strategy exists does not qualify as a complete solution.)

I can prove that such a strategy must exist:

We have a set $A$ of all permutations (what assistant sees) and a set $B$ of all possible positions of a scarf (mark it $0$) and remaining numbers (what the illusionist sees).

Whoops, I just found a bug in my code and it seems my algorithm is unfixably wrong. I'm leaving the answer up and will fix the algorithm section when I find a working one. 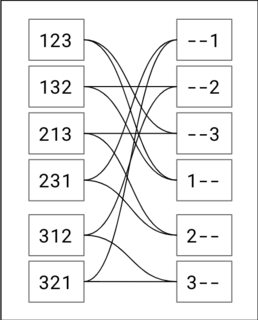 We need to find an injective function $f : S_n \rightarrow C_{n,k}$ such that $\pi$ and $f(\pi)$ are always compatible. The assistant performs the function $f$ and the illusionist performs the inverse $f^{-1}$. As per the problem requirements, both $f$ and $f^{-1}$ need to be computable in poly(n) time for a given input.

For $n = k! + k - 1$ we note that $|S_n| = |C_{n,k}| = n!\,$. We also note that each permutation is compatible with exactly $k!$ coverings and each covering is compatible with exactly $k!$ permutations. As OP mentioned, the Hall marriage theorem thus implies that a solution exists. We can find such a solution using a maximum matching algorithm on the bipartite graph. This is how @orlp found a solution for $k=3$ in the comments. However, the maximum matching algorithm computes $f$ for every permutation in poly(n!) time, where we instead need to compute $f$ for a single permutation in poly(n) time.

Algorithm (does not work)

The inverse is straightforward. Given a covering $c$, we consider the compatible permutations. Among these, we choose the $\pi$ such that $f(\pi) = c$. It remains to be shown that when this $\pi$ exists, it is unique.

Not the answer you're looking for? Browse other questions tagged combinatorics discrete-mathematics contest-math puzzle coding-theory or ask your own question.

3
To minimise max bin sizes in two-level balls-and-bin problem
2
Pigeonhole principle and finite sequences
3
Sizes of Hamming balls on the discrete torus
1
Determining opponents card magic trick
7
Another variant of cops and robber.
2
How does the three piles magic trick work?
1
Hat-guessing problem for finitely many prisoners and infinite sets of hat colors and the Axiom of Choice
12
A magic trick - find out the fifth card if four is given
0
Using Hall's Marriage Theorem