If the infinite set $S$ of positive integers is such that if $x,y\in S$ then $x+y\notin S$, it is easy to prove that $S$ equidistributed implies $S+S$ is also equidistributed. Note that $S$ is called a Sidon set or sum-free set. Let $N_S(z)$ be the number of elements of $S$ less or equal to $z$, and let's assume that

where $a,b,c$ are non-negative real numbers with $b\leq 1$. The sets that I am interested in all have $b>\frac{1}{2}$, for instance, pseudo-primes ($a=b=c=1$) or pseudo-superprimes ($a=b=1, c=2$). Such sets satisfy this conjecture A (see here) : all but a finite number of positive integers can be written as $z=x+y$ with $x, y \in S$. That conjecture would imply that $S+S$ is de facto equidistributed, since essentially, in this case $S+S$ it is the set of all positive integers minus a finite number of them. However, that conjecture A is precisely what I would want to prove, so I can not use it as a justification to establish the much weaker result that $S+S$ is supposedly equidistributed if $b>\frac{1}{2}$ and $S$ is equidistributed. If $b\leq \frac{1}{2}$, conjecture A is not true.

Hints to prove the result and win the bounty

In case it is not true, a counter-example will do. Assuming it is correct, a sketch of a proof for a simple case is enough. Here is how it could start.

$T(n,q)$ is the subset of elements of $T$ that are equal to $q$ modulo $n$. The subsets $T(n,q)$ for any given $n>1$ form a partition of $T$. However the first union for $T(n,q)$ consists of potentially overlapping sets, making the problem non-trivial. Proving the result consists in proving that for any integer $n>1$ and $0\leq q,q'<n$ we have 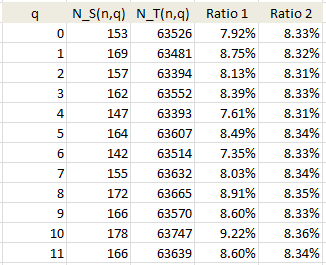 I also did the same test on the set $S$ of perfect squares, which is notoriously not equidistributed. The results are below. 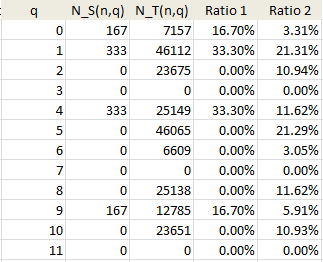 $S+S$ need not be equidistributed.

Not the answer you're looking for? Browse other questions tagged number-theory modular-arithmetic additive-combinatorics sumset or ask your own question.

1
Infinite "Twins" in reduced residue systems modulo primorials
2
A set such that $A$, $A+A$ have density zero but $A+A+A$ has positive density.
0
Solving problem on complete set of residue classes
1
Does here $R$ is the set of all possible remainders when integers are divided by $m$?
2
Infinite set of positive integers such that no subset sum is a square
1
Does a symbol or set of symbols exist to identify the least positive non zero remainder classes of a modulus?
0
Reduced residue classes the same as multiplicative group of integers?
0
Distribution of residues of integers coprime to $n$, modulo another integer also coprime to $n$