How can I prove that 3 planes are arranged in a triangle-like shape without calculating their intersection lines?

So recently in school, we should do a task somewhat like this (roughly translated):

Assign a system of linear equations to each drawing

Then, there were some systems of three linear equations (SLEs) where each equation was describing a plane in their coordinate form and some sketches of three planes in some relation (e.g. parallel or intersecting at 90°-angles.

For some reason, I immediately knew that these planes: 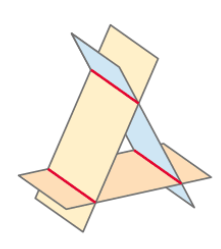 And it turned out to be true. In school, we proved this by determining the planes' intersecting lines and showing that they are parallel, but not identical.
However, I believe that it must be possible to show the planes are arranged like this without a lot of calculation. Since I immediately saw/"felt" that the planes described in the SLE must be arranged in the way they are in the picture (like a triangle). I could also determine the same "shape" on a similar question, so I do not believe that it was just coincidence.

What needs to be shown?

So we must show that the three planes described by the SLE cut each other in a way that I do not really know how to describe. They do not intersect with each other perpendicular (at least they don' have to to be arranged in a triangle), but there is no point in which all three planes intersect. If you were to put a line in the center of the triangle, it would be parallel to all planes.

The three planes do not share one intersecting line as it would be in this case: 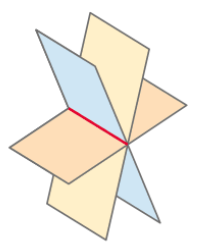 (which was another drawing from the task, but is not relevant to this question except for that it has to be excluded)

If you were to look at the planes exactly from the direction in which the parallel line from the previous section leads, you would see something like this: 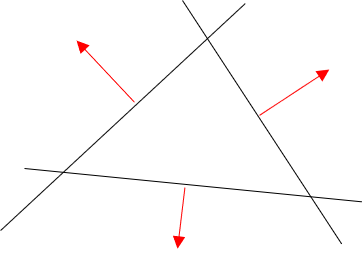 The red arrows represent the normal of each plane (they should be perpendicular). You can see that the normals somehow are part of one (new) plane. This is already given by the manner how the planes intersect with each other (as I described before). If you now were to align your coordinate system in such a way that the plane in which the normals lie is the $x_1 x_2$-plane, each normals would have an $x_3$ value of $0$. If you were now to further align the coordinate axes so that the $x_1$-axis is identical to one of the normals (let's just choose the bottom one), the values of the normals would be somehow like this:

Of course, the planes do not have to be arranged in a way that the vectors line up so nicely that they are in one of the planes of our coordinate system.

However, in the SLE, I noticed the following:

I feel like I am very close to a solution, I just don't know what to do with my thoughts/approaches regarding the normals of the planes.
Any help would be greatly appreciated.

How can I show that the three planes are arranged in this triangular-like shape by using their normals, i.e. without having to calculate the planes' intersection lines? (Probably we will need more than normals, but I believe that they are the starting point).

Update: I posted a new question that is related to this problem, but is (at least in my opinion) not the same question.

$1$. If all three normal vectors of the planes are multiples of the same vector, then you can immediately conclude you have three parallel planes (and not the triangle).

$2$. If exactly two normal vectors are multiples of the same vector, then you can immediately conclude you don't have the triangle. Instead, you have one plane that is cut by two parallel planes.

$3$. If none of the normal vectors are multiples of each other, then it's possible you have the triangle. As you noted, the normal vectors must be in the same plane, i.e. linearly dependent, so it must follow that $\det(A) = 0$. If this isn't the case, then you can immediately conclude that the planes intersect in one point.

Fortunately, choosing a linearly dependent column is easy. You just need to make sure to a) replace a zero column with $\vec{b}$ if $A$ has a zero column or b) if there are two columns that are (nonzero) multiples of each other, then replace one of them with $\vec{b}$. And if none of a) or b) is the case, then you can choose any column.

Example: I'll work thru the steps above with the example you've written.

Steps $1$ and $2$. I can immediately notice that none of normal vectors of the planes are parallel. So we proceed to step $3$.

Conclusion: I think this method is somewhat easier than calculating the three intersection lines. It requires you to calculate two determinants of $3 \times 3$ matrices instead.

(It seems to me that that is all that needs to be said, but I've a horrible feeling I'm missing something $\ldots$)

There is a very easy-to-check necessary and sufficient condition :

You will have the first figure (triangle) if and only if there exists a linear combination of the LHS of your system of equations (1),(2),(3) making $0$ without the RHS being so with the same coefficients ; precisely here :

Either rank$(B)=3$, no such $\vec{y}$ exists and we are in the first case of the necessary and sufficient condition; otherwise, if rank$(B)<3$ : we are in the second case.

If you know some linear algebra, this problem becomes easier to describe and answer. The concepts and terminology from linear algebra capture the relevant ideas well.

As long as the null space of the system of three planes has dimension 1, the planes will form a triangle (as in your 1st picture) or intersect in a line (as in your 2nd picture). In simple terms, when I say the null space has dimension 1, I mean that if you changed the right hand side of the system to all 0’s and look at the solutions to this system (called a homogeneous system), you will get a line (through the origin).

The idea is as follows: Each plane $ax + by + cz = d$ is just a translation of the plane $ax + by + cz = 0$. For example, $2x + y - 3z = 4$ is a translation of $2x + y - 3z = 0$. So if the null space has dimension 1, this means the three planes corresponding to 0's on their right sides intersect in a line. So if you translate them back to the original planes of the original system, this just corresponds to moving each plane parallel to its original position. Thus we will either form a triangle (with the three parallel lines) or remain intersecting in a single line.

So, in conclusion, if you have a $3 \times 3$ system of rank 2 that corresponds to the intersection of three planes, e.g. $\left[\begin{array}{rrr|r} 1 & -2 & 3 & 2 \\ 1 & 3 & 4 & 3 \\ 2 & 1 & 7 & 4\end{array}\right]$, then the rank-nullity theorem tells us the null space has dimension 1. (Here by "rank 2" I mean that the non-augmented matrix has rank 2). As we reasoned geometrically above, the only possibilities for the solution set to this system is either it forms a triangle, i.e. no solution, or they intersect in a line, i.e. a line of solutions. To check that they form a triangle instead of intersecting at a line, you can reduce the augmented matrix. If you get an equation like $0 = 1$ in one of the rows then there is no solution, i.e. no point of intersection of the three planes. This is the desired triangle that you asked about. On the other hand if you do not get a row like that, then the system has a solution, so the intersection must be a line.

A line in the Euclidean space can be described by a system of two equations describing a plane.

If you pick any combination of two equations from your example and convert to the parametric form, you will see that they all have the same direction vectors, meaning the intersections between them are parallel.

Also, if you arrange the coefficients into two matrices, like this:

you'll have that the two lines are parallel if the rank of $A$ is 2 and the rank of B is 3.

From the equations above it is easy to see from the coefficients that such matrices would not be full rank because of the repeated terms.

Oh, now I have talked about intersections after all. Well, there is a duality going on here...

I guess the reason you "immediately knew" that the system

showing that there cannot exist a point where all planes intersect.

That can happen in several ways, the most obvious being that 2 of the planes are parallel. But parallel planes are easy to identify in algebraic form, if they are given as

So we've come to the conclusion that the planes described by \eqref{eq1},\eqref{eq2} and \eqref{eq3} form that picture: They each intersect pairwise, but their intersections are parallel.

Not the answer you're looking for? Browse other questions tagged linear-algebra geometry vectors systems-of-equations or ask your own question.

0
Why are three vectors linearly dependent when one of them is a combination of the other two?
1
Linear algebra efficient way for inconsistent systems

1
If three planes intersect pairwise along parallel lines, then their normal vectors are coplanar
0
Distance between two parallel planes
0
Why line passing through origin in the intersection of three planes is parallel to the planes?
0
How many planes can be drawn in $\mathbb{R}^3$ given that they 're not parallel to the coordinate axis?
0
What is the meaning of angle between two planes?
0
Why are three vectors linearly dependent when one of them is a combination of the other two?
1
Book suggestion in higher dimensional geometry especially regarding lines and hyper-planes in high-dimensional space