Does the staircase paradox apply to areas or volume?

But when we define things like the integral, don’t we also speak of approximating something, in a similar fashion to approaching the hypotenuse of a triangle by staircases from above and below? For example, for the Riemann integral, we speak of approaching the area by looking at the supremum of the lower sums and the infimum of the upper sums; if these two numbers agree, then we say it is integrable.

So why do we seem to not “run into such problems” when considering area/volume (or at least, the problems we run into are not quite the same), whereas we have problems when we (naively) consider lengths? Is it a matter of defining the area/volume as the limit (but this doesn’t seem satisfactory, because after all isn't a big purpose to model phenomena and solve problems, and avoid paradoxes that conflict with basic geometry)? Does it perhaps have to do with measure or dimension, e.g. approaching a line segment by line segments is sort of like approaching a 1-dimensional object by another 1-dimensional object, allowing some “space for things to go wrong”? (And, in general, approaching an $n$-dimensional object by $n$-dimensional ones?)

My basic question is that, a priori, there might not appear much of a reason (not that I’m saying we need one) to confidently/fully believe that our definitions and axioms of area/volume do not run into such paradoxes or do not conflict with some basic geometric properties that we seek to have. So how do we work around this and ensure that our definitions and considerations are consistent and good and all that (whatever that means)?

Approximating full dimensional objects is much easier than measuring lower dimensional objects. The reason is that it is possible to make very small changes to the object to change its shape to some polyhedron whose volume can be computed with elementary methods.

However, if we try to apply the same logic to compute the area of a 2d object in 3d space we run into problems. For instance consider some curved surface in 3d space. 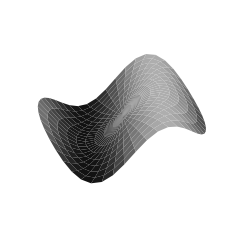 For a curved surface, we cannot find any rectangles perfectly contained in or perfectly containing any piece of the surface. Hence we don't have the earlier elementary method to argue that the area must be between two values that we can easily compute, so we must use a different method of approximation. If the method of approximation is not well chosen, we run into similar problems as in the staircase paradox.

An intrinsic approach is to view the curved surface as a 2-dimensional Riemannian manifold with the metric the surface inherits from the ambient 3d space. Then the Riemannian volume measure gives a reasonable notion of area for the surface. A different (extrinsic) approach is given by considering the 2-dimensional Hausdorff measure. Heuristically, the idea is to cover the 2d surface with small 3d balls and to use (a constant multiple of) the sum of the radii squared as the approximation of the area. In this way you again get something that behaves as a reasonable notion of area.

Both of these notions will give the same results as elementary computations for the area of a polygon or any other shape contained in a planar subset of the ambient 3d space. And both methods generalize well to considering $k$-dimensional objects in $n$-dimensional space (or even non-integer-dimensional objects for the Hausdorff measure, but that is another can of worms!).

The standard definition of the length of a curve $\gamma\colon [a,b]\to \mathbb{R}^n$ is instead a largest lower bound approach, where small pieces of the curve $\gamma$ are approximated with line segments.

In this definition, the approximation of length is motivated by the following axiom:

A straight line segment is the shortest curve connecting its endpoints.

This is not always true in more general settings, but for defining a notion of length in $\mathbb{R}^n$, it is a reasonable starting point. The consequence of this axiom is that all these approximations by piecewise linear curves are shorter than the original curve, i.e. give lower bounds on the length. The supremum of these lower bounds then gives a definition of length that has the properties that one might expect. For instance, for any partitioning of a curve, the total length of the curve is the sum of the lengths of the parts.

But now you could complain that the definition only gives a lower bound on the length, and not necessary an upper bound, so maybe the true length is not a well defined concept. The issue is that it is harder to give a good intuitive estimate from above for the length of a curve. On the other hand, this definition of length works well in practice and agrees with other notions such as integration of the speed, 1-dimensional Hausdorff measure, etc, so it is perfectly reasonable to just use the notion as a definition of length.

In some cases it is however possible to also give an upper bound on the length. This works for instance for convex or $C^2$ curves, see the paper Upper Bounds on Arc Length by Bumby. In the paper, the extra axiom used to approximate length from above is

For instance, in the case of approximating the length of a circle from above, you can use a finite concatenation of line segments tangent to the circle to get an upper bound. And indeed, refining this upper bound approximation and the previously mentioned lower bound for the perimeter of the unit circle, you get the correct length of $2\pi$ in the limit.

When you compute an area, the majority of the terms relate to the inside of the shape and the errors on the outline are negligible (null measure in the limit).

For the length, only outlines matter and all errors contribute fully. 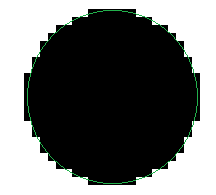 You can easily encounter a staircase type paradox for the area of an $n$-dimensional surface in $(n+k)$-dimensional space, but things get a bit more complicated. The relevant 'more advanced' formula is the 'Area formula'

Staircase paradoxes show that, while a sequence of paths $\gamma_n$ can "approach" a specific path $\gamma$ in some sense you may or may not be able to formalize, the length of $\gamma$ need not be $\lim_{n\to\infty}\gamma_n$, not even if all $\gamma_n$ have the same length. So your question is why areas are different. To take an instructive special case, if a path $\gamma^\ast$ is of the form $y=f(x)$, which in a slight abuse of notation we'll write as $y=\gamma^\ast(x)$, you want to know why the following pair of things is true:

The simplest staircase paradox would take $x_\min=0,\,x_\max=0,\,\forall x\in[0,\,1](\lim_{n\to\infty}\gamma_n(x)=x)$. Horizontal & vertical pieces of the usual staircase make writing $\gamma_n(x)$ as a function of $x$ a fool's errand, which is already a sign the situations may be very different. In particular, the vertical parts are unalarming to the $\int dx$ task as countably many finite-jump discontinuities in an integrand don't matter, whereas to even make the path length well-defined we need a parameter other than $x$ that varies along it. (As @YvesDaoust's answer notes, the vertical paths end up contributing to length in a way not at all analogous to what happens with areas.) Sure, you could alternate two nonzero finite gradients of product $-1$ to get around this. But even in the nicest version of this, you'd still find such paths share the length of the legs of an isosceles right-angled triangle, construed as a polygonal path, and that this length is longer than the "limiting path", which is just the base.

Not the answer you're looking for? Browse other questions tagged real-analysis calculus geometry or ask your own question.

1
Margin of error for a tangent line approximation problem related to the volume of a sphere
8
Simplex volume in terms of the radius of the inscribed sphere?
5
Intersection of 8 spheres: find the volume
7
What is the general term for concepts like length, area and volume?
3
Volumes and surface areas for the $d-$sphere $S^d$ rather than the $d-$ball.