How to find the speed of a block after the collision with a swinging sphere?

A steel sphere has a weight of $40\,N$ and is anchored to a pivot in the ceiling as shown in the picture from below. The wire which connects the sphere to the pivot has a length of $5\,m$ and the system is released when the sphere is held horizontally with respect to the floor. After this, the sphere swings from that position and hits a brass block which has a weight of $200\,N$ which was initially at rest. This latter action is depicted by dashed lines in the figure. Assuming that the surface where the block lies has a negligible friction and the collision between those bodies is perfectly elastic. Find the speed of the ball and of the block inmediately after the collision. Assume $g=10\,\frac{m}{s^2}$ 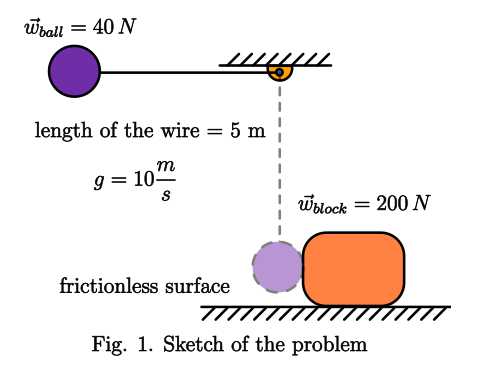 The alternatives given in my book are:

What I've attempted to do was to use the conservation of mechanical energy and use the principle of conservation of momentum to solve this problem. But when I did the calculations none of the answers given appears. What could I did wrong?.

Since I'm given some number I can begin plugin these in:

But the part where I'm stuck is at how to use the fact from the perfectly ellastic collision?. Would it mean to use the $COR=1$?

If this is the case then:

What I did was to use:

But from then on. I couldn't get a clear answer. Can someone help me to clear these doubts?.

My book tells that the answer is the first option. But I am not sure how did the author get there?.

Going through the problem, there are two stages to it -

If you express it as a quadratic and solve, you should be able to find the answer. In general, for elastic collisions, it is usually dependant on the mass ratio of the two objects, so try to divide by any one mass and simplify

Not the answer you're looking for? Browse other questions tagged algebra-precalculus physics classical-mechanics or ask your own question.