Understanding a plot of a complex plane

I am sorry if this sounds a bit convoluted but here goes.

I have written a program that traces a symmetric approximation of a square, my function does not use sine, cosine,or any trigonometric functions, angles or pi... At least not explicitly. It takes two arguments - i,j which are indexes of the center point of the circle, and a variable r denoting the radius. What it does is use complex vector spaces to enable parallelization of the process of tracing the curve directly into the relevant cells that indicate the curve around the i,j center point.

The program works very well, tracing a perfect circle(the circle is not centered properly because my matrix had an even number of rows and columns- but the circle itself is perfectly symmetric): 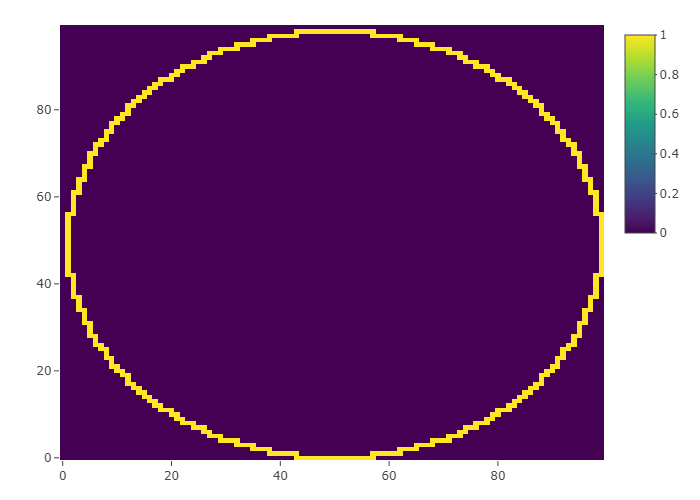 But there was something that made me curious and I failed to figure it out, I inserted into the program a part which saves the real distance of every cell on the circumference from the radius(I am approximating a circle with squares here), just out of curiousity to see how the plot looks. when I plotted it, here is what I got ( this is a 1D plot): 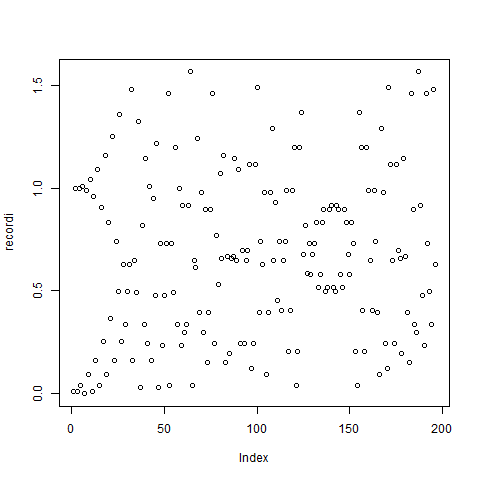 I think the following is adequate evidence that your plots are actually showing hyperbolas that arise when several cells happen to fall in a straight line. Lacking exact details of your algorithm, I wrote a program to find all the $1\times 1$ open square lattice cells in the plane that overlap a circle of given radius. (This number appears to be asymptotic to $8r$ as $r\to\infty,$ consistent with what you found.) For each cell with corner-coordinates $(i,j),(i,j+1),(i+1,j),(i+1,j+1)$, I then computed the distance between the circle and the point $(i,j).$

As an example with $r=459$, the following plot on the left shows distance vs cell index for the first $2000$ cells (there being exactly $3660$ cells overlapping the circle), the cells being indexed in counter-clockwise sequence around the circle from angle $0$ back to $2\pi:$

The plot on the right is the result of re-ordering the cells in the manner you have done (as you explained in comments), so that the first four cells are the ones at angles $0,\pi/2,\pi,3\pi/2$, the next four are the next ones counter-clockwise after those respective locations, and so on around the circle. This "interleaving" is what causes various hyperbolas to get matched up with inverted hyperbolas, giving the appearance of closed curves.

Not the answer you're looking for? Browse other questions tagged complex-analysis complex-numbers algorithms analytic-geometry elliptic-curves or ask your own question.

2
How many unit squares of a square grid overlap a circle of given radius centered on the origin?
2
Finding properties of curves in the complex plane.

0
Geometrical Application of Complex Numbers
2
Plot points on an arc
1
Plot the numbers z in the complex plane that fufill $|z−2i|≤1$ and $\text{Im}(z){\ge}2$
0
Geometrical Complex Numbers Question - Equilateral Triangle
3
The difference between the radii of the largest and smallest circles having centres on the circumference of $x^2+2x+y^2+4y=4$
0
Circumference and straight line equation in complex plane
1
Plotting Reciprocal of a Complex inequality
1
circle sliding along the inside of another circle is a straight line
2
Finding properties of curves in the complex plane.
0
Sketching a set of $ 2 < |z| \leq |z + 2| < 4 $ on the complex plane.