Can a functor be seen as a special case of a profunctor?

This is a conceptual question about category theory, more than a technical one. It has no practical purpose as far as I know, but it's been bugging me for ages.

A profunctor can be seen as a particular type of functor: a profunctor $\phi\colon A\nrightarrow B$ is a functor $\phi\colon A^\text{op}\times B \to \mathbf{Set}$. (There seem to be multiple conventions about the order of $A$ and $B$ and where to put the ${}^\text{op}$. I'm using this one.) For objects $a\in\mathrm{Ob}(A), b\in\mathrm{Ob}(B)$, one can think of $\phi(a,b)$ as something like a hom-set between $a$ and $b$, even though they're in different categories. The elements of $\phi(a,b)$ are sometimes called "heteromorphisms." The functoriality of $\phi$ essentially means that these heteromorphisms have to compose with the (homo)morphisms in the categories $A$ and $B$.

We can also think of $R$ as just a subset of the Cartesian product $S\times T$. The picture of profunctors in terms of heteromorphisms can be seen as a categorification of this view. From this view, we can also see a function as a special case of a relation: it's a relation in which every object in $S$ is related to exactly one object in $T$.

However, at this point the profunctors$\leftrightarrow$relations analogy seems to break down. It would be very nice if we could say, analogously, that a functor $F\colon A\to B$ is a profunctor in which every object of $A$ is related to exactly one object of $B$. However, it seems this can't work. Consider the following example: 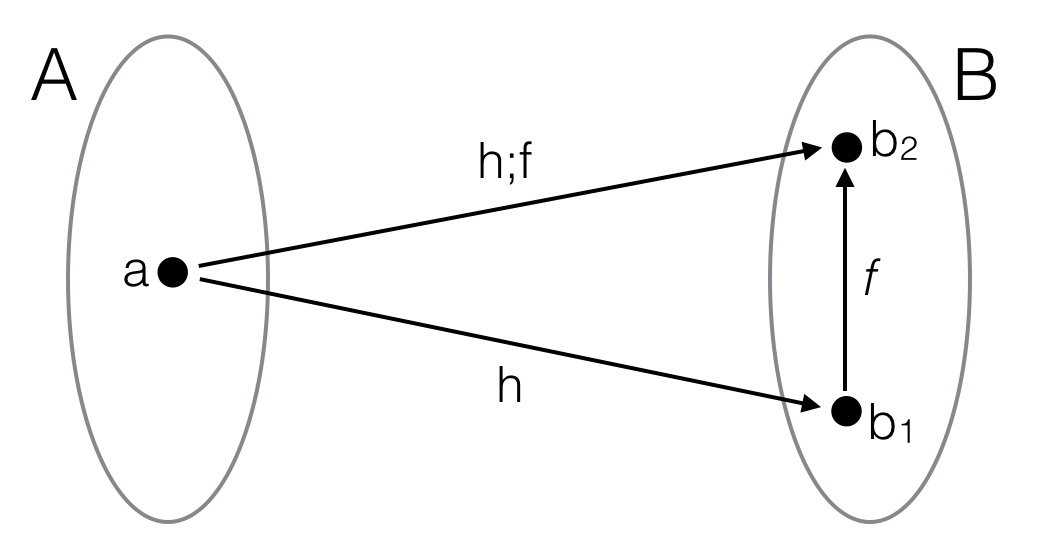 Yes: a profunctor $P : \mathscr C \nrightarrow \mathscr D$ is equivalent to to a functor precisely when $P$ has a right adjoint (in the bicategorical sense), assuming $\mathscr D$ is Cauchy-complete. One can check analogously that a relation $p : C \nrightarrow D$ (i.e. a $(0, 1)$-profunctor) has a right adjoint precisely when it is equivalent to a function, assuming the axiom of choice. There's more information on this correspondence on Wikipedia and the nLab.

Your insight is correct:

Observe that this just leads to the collage category of the profunctor $F_*=(a,b)\mapsto \hom_B(F(a),\,b)$, and that by construction, every base heteromorphism is a reflection arrow.

Assuming the axiom of choice, the converse statements also hold:
If $B$ is a reflective subcategory of (the collage of) a profunctor $U:A\not\to B$, then $U\cong F_*$ for some functor $F:A\to B$ (namely, fix a reflection arrow for each object in $A$ and take their codomains).
If $A$ is a coreflective subcategory of the collage of $U$, then $U\cong G^*$ for some functor $G:B\to A$.

Moreover, if both happens, that means exactly that the profunctor itself is [or, encodes] an adjunction, namely $F\dashv G$.

3
Image of commutative diagram is commutative under functor?
10
Can we make any functor injective on objects?
4
What's the Kan's theorem about geometric realization functor in algebraic geometry?
3
pushout as a special case of a colimit
4
The bicategory of monoidal categories vs the tricategory of one-object bicategories.
6
Function is to relation as functor is to?
2
Understanding contravariant functors and inner products