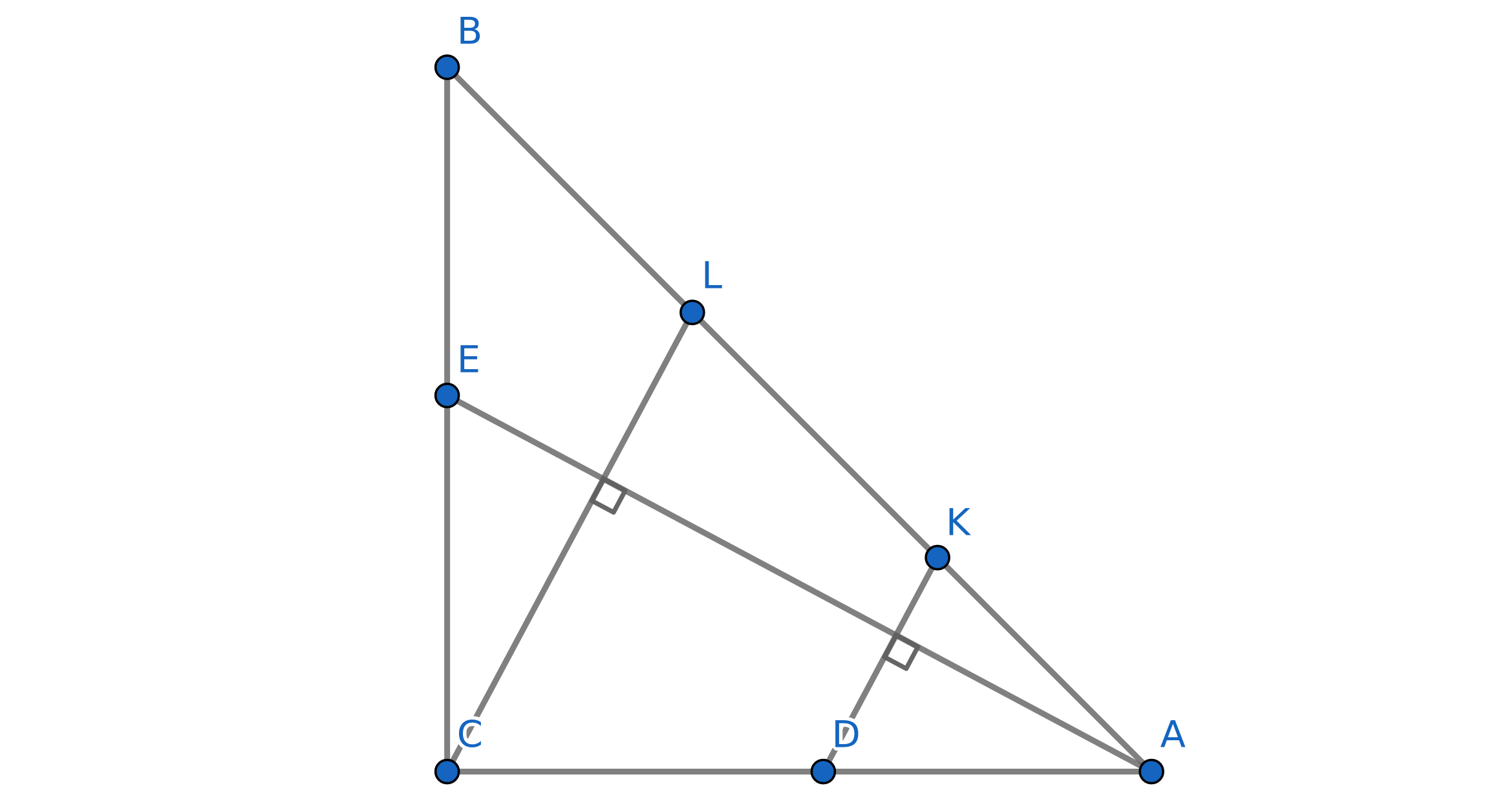 I want a solution via vectors and I'll explain why in the end of the question, tl;dr.
The question consists of:

To give more explicit context, I'll explain the basic things we can do with vectors to approach real geometry problems.

Having these tools, we can approach problems, where all conditions given and things to be proven/found are: parallelity, perpendicularity, fixed angles, intersection, intersection at a ratio (and maybe some others). But apparently we can't deal with circles, addition/subtraction of angles and many other things. But boiling a geometric problem down to algebra can be useful when no other ways seen. Other approaches are complex numbers or Cartesian coordinates, but vectors are unfairly less popular/known. I'd say, many vectors excercises are constructed just to train using vectors, instead of showing how real geometrical problems may be solved in an algebraic way.

I made the figure above in geogebra and started moving free point $D$ back and forth and see how the things change and I noted that somewhat asymmethrical that we have $3$ points on $AB$ and only two on $AE$, I wanted inverse-image of $B$ to be present to. To construct it, I mirrored $B$ relative to $AE$ into $B'$. 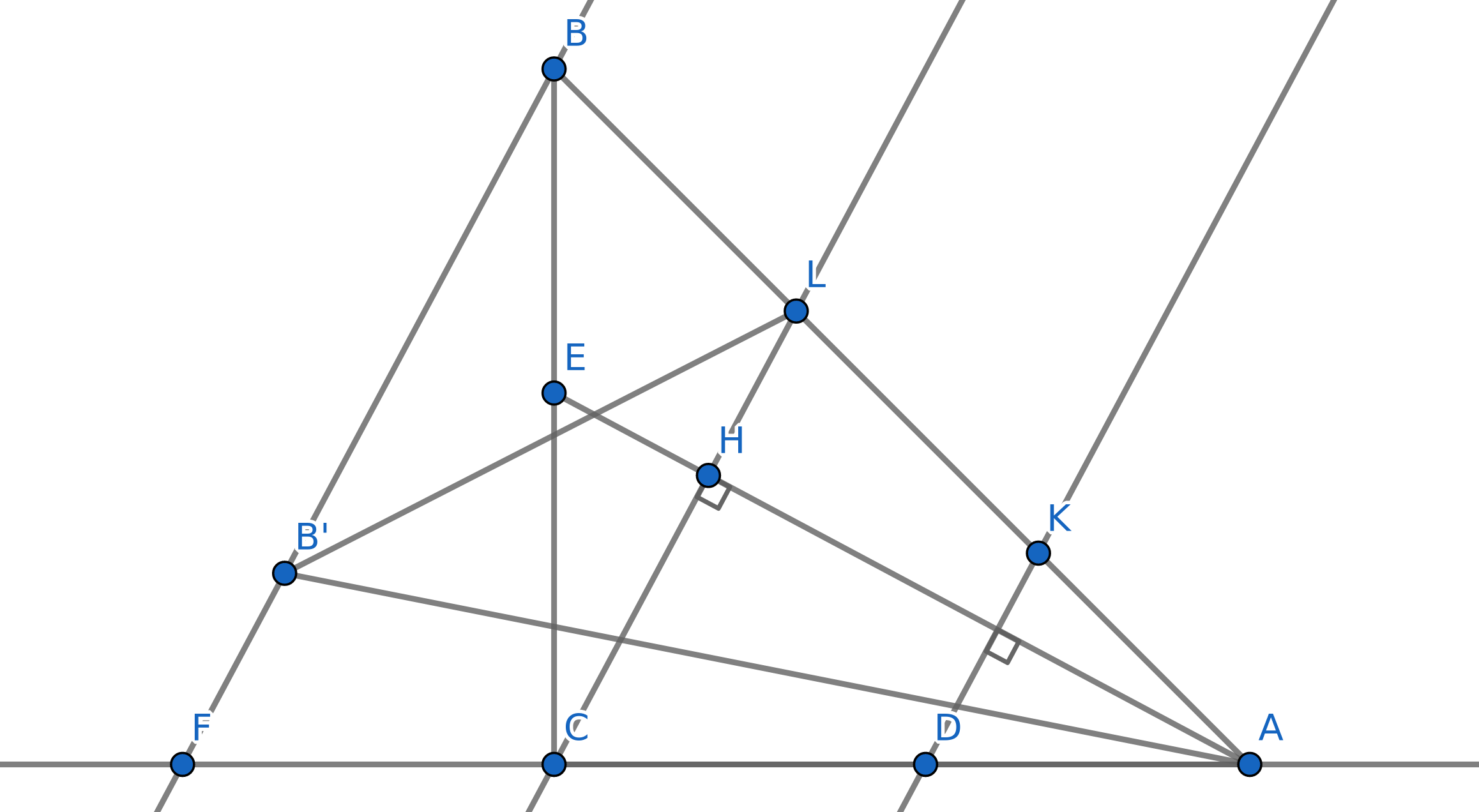 But imagine I were at a contest without being able to use geogebra and move the point $D$ and to want to construct $BB'$, then arriving at this solution with such additional constructions is highly doubtful. While vectors approach is pretty straightforward: algebraically express what's given and what's needed, solve algebraical problem, usually a linear equations system. That's why I want vectors solution. Other algebraical solutions, like Cartesian coordinates, complex coordinates or even something like barycentric coordinates are welcome as well.

Thanks for reading this through out.)

I would provide an additional rapid solution, strictly based on analytical geometry. Let us scale and place our triangle in a Cartesian plane, with vertices in points $C(0,0)$, $B(0,1)$, $A(1,0)$. 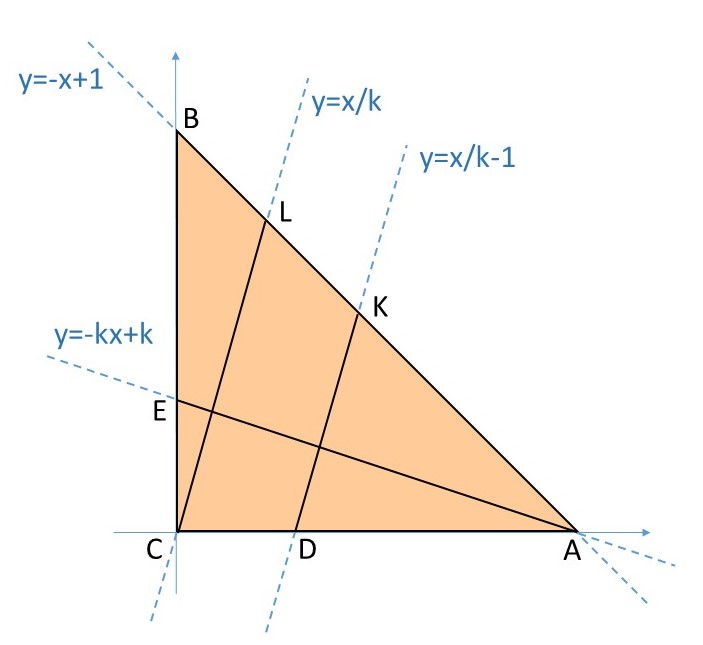 This directly shows that both the $x$- and $y$-coordinates of the points $B$, $L$, and $K$ are in arithmetic progression, thus completing the proof.

Let's prove a generalization for arbitrary right triangles. The algebra is slightly hairier than the isosceles case, but the end result seems worth the extra effort.

In the particular problem with two isosceles triangles, $\cot A = \cot A'=1$, so that $(\star)$ shows $L$ to be the midpoint of $\overline{KB}$. Note that $L$ is also the midpoint for not-necessarily-isosceles but appropriately-similar right triangles. $\square$ 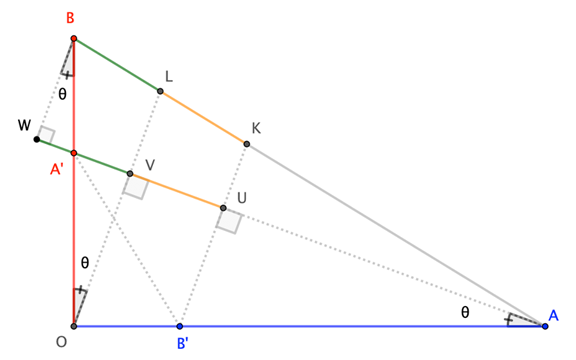 This is an idea of the Cartesian program to solve problems. As some other his clear ideas, it turned out to be too naїve. See its development in a book "Mathematical discovery: on understanding, learning and teaching" by George Polya (in Russian translation "Математическое открытие" Джорджа Пойа), which is helpful for contest problem solvers.

Differences between analytical and geometrical approaches to geometrical problems were considered by an adept of the first approach, V. Tikhomirov in a paper “Geometry or analysis” (in Russian) from the good old “Kvant”, which I read when I was a schoolboy.

I was good in school algebra and weak in school geometry so at contests I first quickly solved algebraic problems and postponed geometrical those to end. Then I had some time left for a one or two problems and usually used an analytical approach to solve them. At a contest, when a quick solution is needed and a search for geometrical tricks like an additional construction can be fruitless, this was a good strategy for me. Nevertheless, sometimes an analytical way can lead to cumbersome calculations and be too long, whereas an easy trick can shorten a solution a lot. Once I had a problem to calculate some angle, which I finally did, canceling cumbersome fractions. Later I got to know that the other contestants simply drew a picture, measured that angle and proved that it is equal to fifteen degrees. So I lost a lot of time due to my straightforward approach. This could cost me a few points, which was crucial for me, because this contest was an IMO selection and I turned out a few points below my main competitor from my city, and he was qualified to be in the team, whereas I was not (luckily for me, he obtained no awards at that IMO, so the head of our school thought that if I would participated instead of my competitor then I could win an award, but this is an other story).

Another example of a long analytical way to an answer is my solution of this bounty geometry problem, which was even not upvoted although it was the first.

Sometimes an analytical way can be too complicated and lead to a blind alley, for instance, when I studied an inequality from celestial mechanics, see these comments.

Not the answer you're looking for? Browse other questions tagged geometry vectors euclidean-geometry alternative-proof or ask your own question.

4
A problem concerning a parallelogram and a circle
3
Difficult inequality with three real variables
3
Trapezium, transversals...and a median?
2
Prove that $HK$ passes through a fixed point.
0
In which ratio does the point $P$ divide the segment $\overline{AN}$?
1
In the triangle $ABC$ with two given points $P,Q$ on the plane of the triangle, show that the points $P, Q $ and $C'$ are colinear.
1
Find the border radius tangent's relative coordinates in a rhombus
0
How to get the point at which a line passes through another line perpendicular to it

0
Vector of triangle height constructed over two vectors
0
Triangle geometry problem
0
Vectors Question about proving if sides of square are perpendicular.
0
Can one prove that whether a triangle is a right-angled triangle just by looking at the position vectors of its vertices
1
In the triangle $ABC$ with two given points $P,Q$ on the plane of the triangle, show that the points $P, Q $ and $C'$ are colinear.
1
Geometry, prove that $E$ bisects $\overline{HI}$
1
Crux problem #39 with vectors approach
4
Confusion with vector spaces