I can't understand any of sentences from the images below. Since I don't understand almost every possible lines, I'm very troubled for what I should even ask. But I'll try to.

Secondly, how can they be sure they can show the pattern continues just by showing 3 cases? 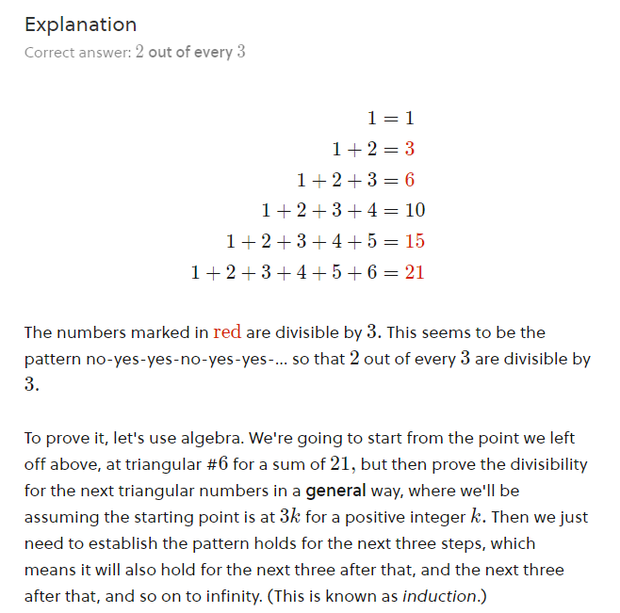 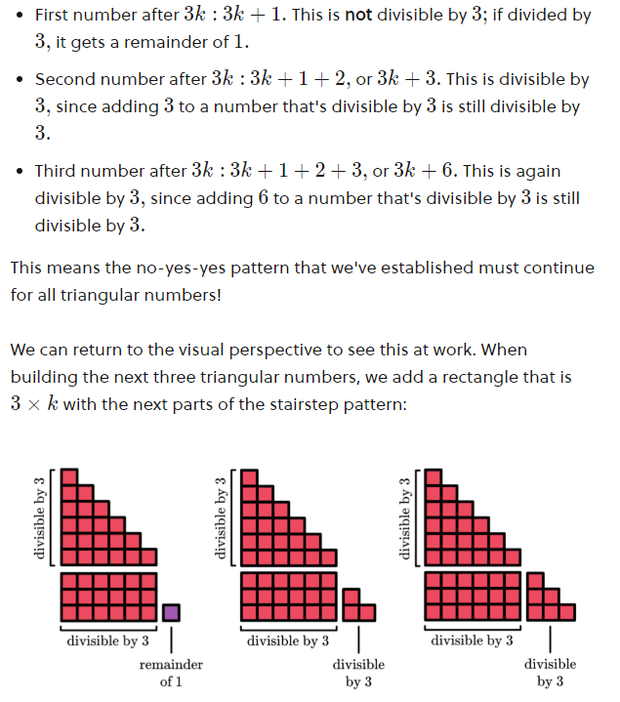 I think to understand what is going on we should make as clear as possible the difference between the small numbers we add up in each step and the big triangular numbers.

The situation they start from is that for some small number (such as 6) that is itself divisible by 3 we find a big triangular number (in the example: 21) that is also divisible by 3. Now we want to introduce the number $k$ to write numbers that are divisible by 3 as 3k. The author of the picture does not specify which of the two they rewrite in this way and this remains unclear forever so let's do it better ourselves.

The final thing you need to understand is that after three steps we are back in the same situation we started with:

Since these two properties was what defined our starting position we can repeat the same reasoning over and over.

Not the answer you're looking for? Browse other questions tagged elementary-number-theory divisibility triangular-numbers or ask your own question.

4
$16$ natural numbers from $0$ to $9$, and square numbers: how to use the pigeonhole principle?
3
Numbers till 400 divisible by 2, 3, 5, 7
5
1000 numbers on a blackboard
2
How to find Triangular Numbers
2
Proof using deductive reasoning
1
Five Consecutive Integers divisible by a square greater than 1
0
How many 1s in the base 10 list of numbers from 1 to trillion?
24
There is a number divisible by all integers from 1 to 200, except for two consecutive numbers. What are the two?
0
Removing numbers skipping one at a time
6
Proving that 2 out of every 3 triangular numbers are divisible by 3