I have recently watched this video by $3$Blue$1$Brown, regarding winding numbers and the fundamental theorem of algebra. I am trying to formalize the idea he shows in the video (starting at 21:26). Specifically, I am trying to connect his proof to a one I've seen in complex analysis classes:

Qustion 1: What does he mean by this winding number? I.e., what is the formal definition of a "winding number" of a function? I am familiar with the definition $$\operatorname{Ind}_\gamma (a) := \frac{1}{2\pi i} \oint_\gamma \frac{\text{d}z}{z-a},$$ which defines the index of a (closed) path in respect to a point.

He then explains that the winding number of $Q(z)=z^d$ (in his video, $d=5$) around $0$ is $d$ (around some circular path). This I can intuitively understand - as $x$ goes along the unit circle, for example, the function $x^d$ goes around the circle $d$ times. 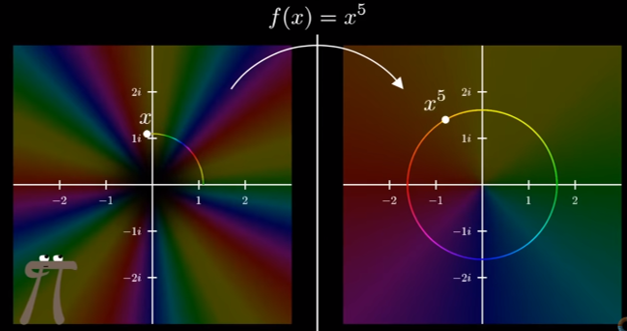 Now, as $z\to\infty$, the leading term of $P(z)$ is the only significant one, so $3$B$1$B explains that in a large enough circle, the index of $P$ and $Q$ will be the same. This argument is quite similar to the one in the proof above -

Qustion 3: I assume that using Rouché's theorem "hides under the surface" some of the intuition in the proof. Is there a way of explicitly using this index equality of $P$ and $Q$ in a large enough circle formally in order to prove the fundamental theorem? Moreover, I know that paths that are homotopy equivalences, have the same index. Are $P$ and $Q$ in fact homotopy equivalences in the area outside the circle?

Summing up, I am looking for a more "mathematically complete" explanation of $3$B$1$B's argument, rigorous yet intuitive.

Question 4: Rouché's theorem is proved using the so called argument principle, as Oliver Diaz's answer mentions. I assume that, intuitivly, we would have wanted to write $\int_\gamma \frac{f'(z)}{f(z)} \ \text{d}z=\ln(b)-\ln(a)$ (if $\gamma(0)=a$ and $\gamma(1)=b$), but that is of course nonsense, since the complex logarithm is not holomorphic in $[-\infty,0]$. That does remind me of the work done in a non-conservative field. Is this really the intuitive reason that the argument principle "works"?

What Rouche's theorem says is that if two analytic functions $f,g$ are "relatively closed" (given by the condition that $|f-g|<f$ along some closed curve contained in the domain of analyticity) then both have the same nomeber of roots (according to multiplicity). So in the proof of the fundamental theorem of algebra, $Q(z)=z^d$ has $d$ roots ($0$ with multiplicity $d$) thus, by the fact that $P$ and $Q$ are relatively closed (along a large circular path for example), then $P$ has also $d$ roots inside the circular path. (some could have multiplicity larger than one, but when you add the multiplicities of each of the roots you get $d$)

The proof of Rouche's theorem is indeed based in the winding number of curves. In particular the following results

The last ingredient is that the number of zeroes of the function can be directly connected to the winding (Index) number of a curve:

I hope this give you more context to the intuition you got from the video you mentioned.

Not the answer you're looking for? Browse other questions tagged complex-analysis intuition complex-integration or ask your own question.