Show that the normal line of a parabola at point P...

Show that the normal line to a parabola at one of its points $P$ bisects the angle included between the focal radius of $P$ and the line through $P$ parallel to the axis of the parabola.

Let the tangent at point $P$ (whose co-ordinate has parametric form $(at^2,2at)$) intersect the axis of the parabola, the X-axis in our case, at the point $T$. 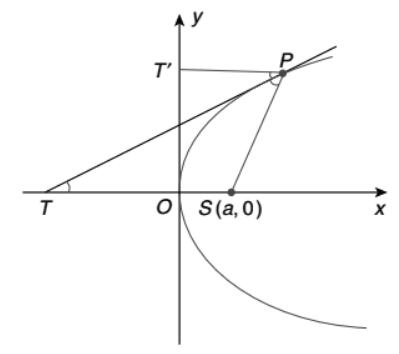 Then $\mid ST \mid = a+at^2$ which is also the length of the segment $SP$ (which you can find out from their co-ordinates).

Thus we have shown that the tangent at $P$, bisects the angle between the focal radius at $P$ and the line through $P$ parallel to the axis of the parabola, and if the tangent at $P$ bisects this angle ($\angle T'PS$ in this case), then the normal will bisect the supplementary angle, which was asked.

Note that this will hold for any parabola, oblique ones as well, because it is only a matter of reparametrisation.

Not the answer you're looking for? Browse other questions tagged geometry euclidean-geometry analytic-geometry conic-sections or ask your own question.

3
Prove that the foot of the perpendicular from the focus to any tangent of a parabola lies on the tangent to the vertex
0
Show that lines created by certain points on the parabola intersect at the directrix?
0
Equation of a parabola that passes thorught 2 point with know slopes
2
Angle between two straight lines (tangent formula)
0
Can a line parallel to axis of parabola also represent tangent at a point along with the one whose slope is found using calculus?
2
Coordinate geometry perpendicularity problem
0
angle between lines
2
Find the equation of parabola, when tangent at two points and vertex is given
0
equation of the straight line passing through a point and having a specific intercept between parallel lines
0
Prove that the normal to the parabola at $Q$ bisects the angle $FQP$