Location of zeros of a sum of exponentials

Another prelim problem. For Rouche's theorem we need to find a bounded domain. I tried for $R<|z|<r$ and then looked in the left half plane so that $|e^z|<1$ but then I cannot apply the triangle inequality to the other side. 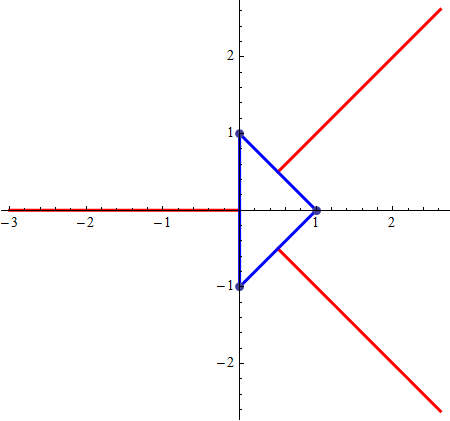 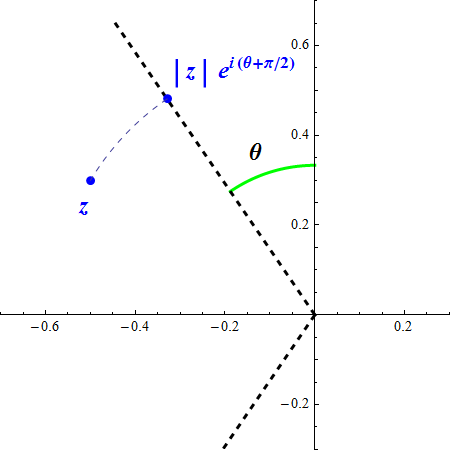 as $|z| \to \infty$ with $|\arg z| \geq \theta + \pi/2$, so that in this sector $f(z)$ looks like a cosine plus something very small asymptotically. We would then expect the zeros of $f(z)$ to approximate the zeros of the cosine as $|z|$ increases in this region.

To summarize, in each of the sectors of width $\pi-2\theta$ symmetric about the perpendicular bisectors (the red lines in the first figure), the quantity $f(z)$ looks like a cosine (perhaps times an exponential) plus something that vanishes exponentially as $|z| \to \infty$. For $\theta$ small these sectors actually overlap, so we would expect that the only large zeros of $f(z)$ are those that approximate the zeros of these cosines.

Let's show that $f(z)$ has no zeros between the perpendicular bisectors for $|z|$ large enough.

Locating the zeros with Rouché's theorem.

To connect these we can choose $R_n$ to satisfy

where $W$ is the principle branch of the Lambert $W$ function. Since

as $n\to\infty$. We have met the requirements of Rouché's theorem and may now conclude that

A similar argument will yield

If you'd like you can go further by choosing the $R_n$ to all be the same size to show that any other zeros, if they exist, must lie "between" these roots. Then show to the contrary that $f(z)$ is eventually nonzero in any ball of fixed radius there which overlaps with the $R_n$ balls. From this you may conclude that the zeros described above are the only large zeros of $f(z)$.

you may wish to look at Section 2 of the nice paper Zeros of sections of exponential sums by Bleher and Mallison. I followed the basic outline of their results in writing this answer. They also give an older reference which treats a slightly more general case.

Not the answer you're looking for? Browse other questions tagged complex-analysis roots or ask your own question.

4
Calculating the Roots of Sine
7
Roots of a finite Fourier series?
1
roots of sum of exponential functions