How can I calculate the angle of a slice of an ellipse?

I'm attempting to draw a pie-chart programmatically, using an ellipse instead of a circle, but I'm having trouble calculating the correct angles for the slices. If it were a circle, I could use the percentage that the slice represents multiplied by $360$ degrees to obtain the accurate angles created by the slices.

Assume the following is known about an ellipse centered at the origin with a slice $s$:

How do you calculate the angle that slice $s$ creates from the center of the ellipse?

Note: Essentially, I would need to find either $\theta_2$ or the angle of the yellow-shaded slice depicted in this question: 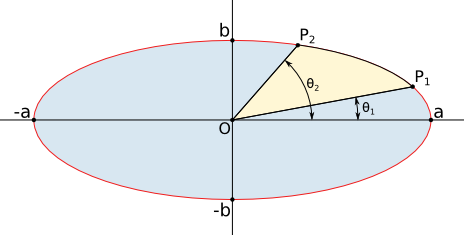 11
Deriving the Area of a Sector of an Ellipse

6
Normal to Ellipse and Angle at Major Axis
2
Numerical integration of a region bounded by an ellipse and a circle
0
Calculating the points of a annular sector type shape.
12
How can the centers of these 5 related circles be specified as a formula?
2
Calculating distance of slice tip from pie center for correct slice spacing
2
How to prove that $0$ sum could be reached