Radius of circle that touches 3 circles, which in turn touch each other

What is the radius of the smaller circle?

This is what I did:

Then I wrote a general equation of a circle( for the smaller one) , and using the fact that distance between the centers is equal of the sum of radii ( for circles touching each other) I found $3$ equations, which I could use to solve for the variables in the general equation. Hence I found the equation of the smaller circle, and thus its radius.

However, I believe that this method is very inefficient as I ended up with so many steps and sub steps to solve the equations.

Is there a better way to approach this?

I would prefer a geometrical solution instead of a coordinate solution.

Thanks for the help!!

I found that this question already has an answer here:https://math.stackexchange.com/questions/1867315/problem-including-three-circles-which-touch-each-other-externally

However is there a more efficient solution for this than what was mentioned in those answers? 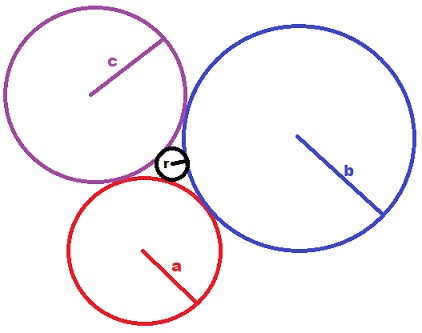 Notice, the radius $r$ of the small (inscribed) circle externally touching any three externally kissing (touching) circles of radii $a, b$ & $c$ is given by the generalized formula as follows

Not the answer you're looking for? Browse other questions tagged geometry euclidean-geometry circles alternative-proof or ask your own question.

1
Problem including three circles which touch each other externally

6
Three mutually-tangent circles have centers at given distances from each other; find each radius, and find the area between the circles
0
How to find the radius of small inscribed circle?
0
Show that the circles touch externally and find the coordinate where thy touch
1
Equation of 3 circles touching each other is given, what is the equation of a circle touching all 3?
0
Find the radius of three identical circles which touch each other externally.
1
Problem including three circles which touch each other externally
3
Given two touching circles, find position of a third circle of known radius so that it touches them