For example, take the Petersen graph, shown below: 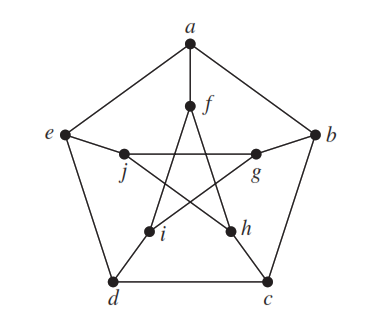 We have this path between e and f nodes: "eabcdigjhf".

And if we delete node d we have this path: "eabchjgif"

(The usual proof in such cases that finding a structure is the same as checking it exists doesn't seem to work, since there's no way to easily use an algorithm for the decision problem to figure out which edges of the Hamiltonian $s,t$-path in $G'$ are necessary.)

Finally, add the following vertices one at a time, using our putative algorithm to check extend our existing Hamiltonian $s,t$-path if it is possible:

Therefore our algorithm will find a Hamiltonian $s,t$-path in $H_1$ - and then in $H$, which was arbitrary.

Not the answer you're looking for? Browse other questions tagged graph-theory hamiltonian-path or ask your own question.

1
How to prove Petersen graph has no Hamiltonian cycle?
1
Proof that deleting a certain node in a graph where two nodes have a path of length greater than n/2 destroys the path between the two nodes.
1
Graph theory: path of X cost between two nodes
0
Minimum Nodes for Hamiltonian Path
1
Is Hamiltonian path NL?
2
Can a graph have both a Hamiltonian cycle and path at the same time?