Why can arbitrary functions be substituted into Taylor Series?

Using a Taylor Series centered on $x_0=0$, its easy to see that:

In the above, $\mathcal{O}(x^3)$ just represents higher order terms. After understanding Taylor Series, I understand the above approximation.

However, in many Physics Textbooks, its common-place for the author to replace $x$ with whatever he feels like, and make the same approximation.

For example, in Purcell's E&M, when explaining multi-pole expansions he writes: 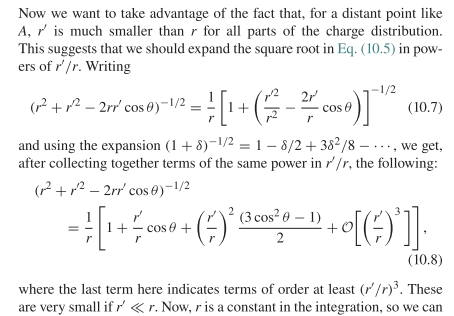 However, while reading this, it occurred to me that I have never seen it explained why we can just replace any expression for $x$.

If someone could explain this, I'd really appreciate it! Thanks!

Taylor's theorem says that (of course, this is not the most general version of the theorem)

And so on. Literally any real number $x$ you think of, as long as the number $x$ lies inside the domain of the function $f$, you can plug it into the above equations and they remains true.

Never EVER get hung up on what letters we use. Math does NOT care what you favourite letter is (forgive the caps... don't think of this as shouting... I really just want to emphasize an obvious fact, which sometimes people seem to forget; I know I sure forget this from time to time). So, don't pay much attention to the fact that I used the letter $t$ instead of $x$. If you want, I can say the following statement, and it says literally the same thing as what I said above:

Just to emphasize once again that symbols shouldn't change the intended meaning, note that the following statement is just as mathematically valid:

One more time just for the sake of fun:

So, if you're ever in doubt if you can plug something into a function, just ask yourself one very simple question: is the thing I'm about the plug in part of the domain of validity of my function? If the answer is "yes", then of course, you're allowed to plug it in, otherwise, you can't (simply by definition of "domain of a function").

By the way, I know I haven't directly addressed your question about the multipole expansion. The reason is because your problem seemed to be more of a conceptual one understanding the meaning of what one means by substitution (lol I remember being confused by these matters too). Given what I've written so far, I invite you to read through the multipole argument again, and try to convince yourself that the manipulations are all valid. If you still have trouble, then let me know.

The bounding condition on the $n+1$th derivative has nothing to do really with pluging in a number like $g(t)$, because like I mentioned in my first sentence, the theorem stated above is not the most general version. Here's is the version of Taylor's theorem which I first learnt, and which has the weakest hypotheses:

Notice the differences between this version of the theorem and the previous version:

Anyway, the reason I mentioned this form of Taylor's theorem is to say that regardless of the bound on the $n+1$ derivative, you can always plug in another function's values, $g(t)$, as long as the composition $f \circ g$ makes sense. That's the only restriction you have. More explicitly (with notation very similar to the one above),

Anyway, the major conclusion here is that: As long as the composition $f \circ g$ makes sense, I can always write things like $f(g(t))$. And of course, once you think about this for a while, it becomes one of the most obvious things in the world.

Note that what I've been talking so far about is "Taylor's theorem" which deals with "Taylor polynomials", and NOT "Taylor series". A polynomial has a finite sum of terms, while a series is defined a limit of partial sums of finitely many terms. And this is probably more of what you're confused about in your comment.

Hopefully these remarks show you what statements you can and can't make in regards to substituting things inside functions. As a summary:

You can see that these kinds of exercises can be quite tedious (and your textbooks will skip all the intermediate steps), but the calculations are mechanical -- just keep track of the exponents that appear when you expand. The whole idea of $O(\cdot)$ notation is to sweep all this fussiness under the rug.

Not the answer you're looking for? Browse other questions tagged calculus taylor-expansion physics approximation substitution or ask your own question.

18
Where do the higher order terms in Taylor series come from?
5
Taylor series with functions as parameters (as opposed to variables)
1
Taylor Series - general 'what' and 'why' questions
1
An Example of Taylor Series
7
Is there an alternative to Taylor expansion of functions with more control over the error distribution?
0
Taylor expansion of difference of functions
4
Taylor series third order approximation
21
Settle a classroom argument - do there exist any functions that satisfy this property involving Taylor polynomials?
2
Taylor Functions for Complex and Real Valued Functions