However I was wondering: how can I explain this intuitively? If one thinks of a dense subset, such as $\mathbb{Q}$ in $\mathbb{R}$, one thinks of something that is "so close" to the original set that it is undistinguishable, in a certain way. I think the most intuitive explanation would be that when you take those intervals, you are "scaling down" their lengths faster than how a given sequence of rational points approach a non rational one.

But this may sound a bit confusing, tricky, so I was wondering: is there a simple, intuitive, possibly graphical way of explaining to someone with very little background in math why rationals have measure zero?

You could utilize one of the well known ways to count the rational numbers, namely consider the integer lattice $\mathbb Z^2$ and the subset $\{(a,b)\mid a\geq 1\ \wedge\ b\geq 0\}$ as illustrated here: 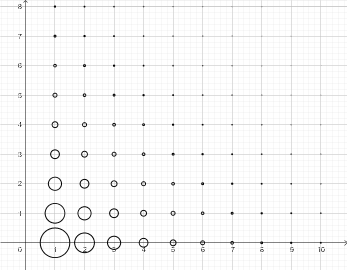 This corresponds to the positive rationals, namely $(a,b)\mapsto\frac ba$. It is a surjective covering and it is now simple to see how we might cover all those points using circles of a finite total area $\varepsilon$ for any given $\varepsilon >0$. In the image above, I have done this using circles of exponentially decreasing sizes, which corresponds to using the well known sum $$ 2=\sum \frac n{2^n} $$ as a finite bound which can then be scaled down ad infinitum.

Thus we can project this representation onto $\mathbb R$ and make a similarly effective covering there.

BTW one way to project this onto the number line $\mathbb R^+$ would be to draw a vertical line at $x=1$. Then given any rational number $q$ one could draw the line from the origin $(0,0)$ through $(1,q)$ and project the circle from the first lattice point this line passes through onto the vertical line $x=1$. This projected circle around $(1,q)$ would effectively translate into an interval around $q$ on the positive $y$-axis (corresponding to $\mathbb R^+$).

This is a really hard question; I think in general intuition for this sort of thing tends to come with experience, as you get used to the concepts. Having said that, I'll try to articulate the way that I think about it.

I guess the way of viewing $\mathbb{Q}$ as a subset of $\mathbb{R}$ is a load of dots on a continuous line. Obviously these dots are very close together (in fact the whole thing is nonsense because they're dense in $\mathbb{R}$), but intuitively the mental image does help to capture some of the relevant properties, particularly with an eye to the Lebesgue measure.

I would suggest constructing this set in steps, according to increasing denominator. Start with $\mathbb{Z}$. It seems pretty clear to me that this should have measure zero, since the dots are spaced out, and hence they occupy an "infinitely small" proportion of $\mathbb{R}$. Rigorously, we can prove that $\mathbb{Z}$ has measure zero by putting an interval of width $\epsilon 2^{-\lvert n \rvert}$ around each $n$.

At each step, we have a set of measure zero. If we continue this process infinitely, we will eventually reach every rational number (i.e. for every rational number $x$, there is a finite $n$ with $x \in S_n$), so in some sense $\mathbb{Q}$ is the "limit" of these null sets, and hence it is itself null. We can certainly make this "some sense" rigorous, since $\mathbb{Q}$ is the countable union of the $S_n$, but I'm not sure that's useful for the intuition.

Obviously what I've done here is not very sophisticated, but I think it is a bit easier to visualise than just invoking countability of $\mathbb{Q}$, since we are actually "zooming in" on $\mathbb{Q}$ in an explicit way.

This isn't a geometric answer, but you can get a lot of intuition for Lebesgue measure by thinking about it probabilistically. Specifically:

To understand the latter, observe that one method for producing a random real number between 0 and 1 is to repeatedly roll a 10-sided die (with faces labeled 0 through 9) to decide on the decimal digits of the number. For example, if you happen to roll the sequence $$ 3,\quad 1,\quad 4,\quad 1,\quad 5,\quad 9,\quad 2,\quad 6,\quad\ldots $$ then you have randomly selected the number $0.31415926\ldots$, or $\pi/10$. Since a real number has an infinite sequence of decimal digits, you have to roll the die an infinite number of times, but at the end you have produced a random real number.

Such a randomly produced number is rational if and only if the sequence of digits that you roll is eventually repeating, and if you think about it this is extremely unlikely. For example, it's basically impossible (probability zero) that you will eventually start rolling the same digit forever. It's just as unlikely that you will eventually start rolling the same pair of digits over and over, or the same sequence of three digits over and over, and so on. To me, this is a very intuitive argument that $\mathbb{Q}\cap[0,1)$ has measure zero.

For (1), if $x$ is rational then its digits must consist of an initial block of length $i$ followed by a repeated block of length $j$, and it follows that $x$ satisfies the $n$-repetitive condition on its first $k+nk$ digits for any $k\geq i$ that is a multiple of $j$.

Of course, this construction of open neighborhoods of $\mathbb{Q}\cap (0,1)$ with small measure is much more complicated than the usual one, but it always feels somehow more concrete to me, in the sense that we have described very explicitly which numbers are in the set using the digits of the decimal expansion, and it's somehow much more obvious that this set takes up only a small portion of the unit interval.

Not the answer you're looking for? Browse other questions tagged measure-theory lebesgue-measure intuition education or ask your own question.