Which proportions of areas can be formed by circles in the plane?

Consider two circles in the plane, one red and one blue with a purple intersection. 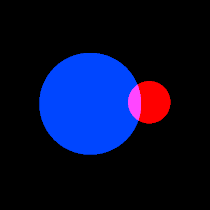 The proportion of the area in the plane that is occupied by each color can be seen as a point on the 3-simplex if we say that each triple is (Red Area, Blue Area, Purple Area). The illustration above would correspond to some point close to (0.14, 0.84, 0.02). All points on the 3-simplex can be realized by circles in this way. If we think of this as a function, $f_2 : X^2 \rightarrow \triangle^3$ (where $X$ is some parameterization of circles), then we would say that it's surjective.

If we now add a green circle to the plane we would be able to form 7 different colors. 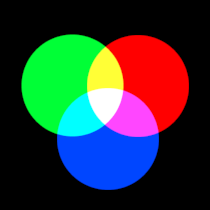 And now we get a new function, $f_3 : X^3 \rightarrow \triangle^7$. The difference is that this function isn't surjective. For example: consider a configuration where we only see yellow, purple and cyan, all having an area of $1/3$ each.

This can of course be generalized to more circles with $f_n : X^n \rightarrow \triangle^{2^n-1}$ and $F_n$ defined similarly.

In that case we can easily prove that $F_n \leq F_{n-1}$ by considering the restrictions on all circles but one and then adding the last one. We can also prove the stronger statement that $$ F_n \leq \min(\{F_p^{\lfloor n/p \rfloor} \mid 1 < p < n\}) $$ This can be proved by splitting the circles into groups of size $p$ and using the fact that if one of the groups can't be formed then the whole configuration can't be formed. A corollary of this is that $$ (\exists n. F_n \neq 1) \implies \left(\lim_{n \rightarrow \infty} F_n=0\right) $$ But this argument doesn't construct the value of any $F_n$. So my questions are

What about for higher $n$?

If we can't find exact values, are there at least better bounds?

Observe that $X$ has real dimension $3$, since a circle in the plane is described by the coordinates of its center and its radius. So $X^n$ should be thought of as a $3n$-dimensional space - indeed, we can parameterize it by $3n$ real numbers in a natural way as described above, and when we do so the areas of each of the $2^n-1$ possible regions will be given by a function of these $3n$ parameters which is given by a piecewise composition of "nice" functions (e.g. "if these three circles are in the following type of configuration and all other circles are sufficiently far away, the area is given by the lune formed by $A$ and $B$ minus the intersection with $C$" and so on). In particular, the areas of these regions are not given by any sort of pathological space-filling curve functions of the $3n$ parameters.

In fact, for all circle arrangements $x\in X^n$, $f_n(x)$ is invariant under any combination of translation, rotation, and scaling of $x$, so we can effectively quotient out by a $4$-dimensional space of symmetries preserving $f_n$. This brings our dimension down to $3n-4$.

Not the answer you're looking for? Browse other questions tagged geometry circles combinatorial-geometry or ask your own question.

4
Determine these two angle (Isosceles triangle)
1
Geometry - Isosceles triangle made from intersection of circles
3
Area of the polygon formed by cutting a cube with a plane
1
Place three circles such that they uniquely intersect at each point in the plane
12
How can the centers of these 5 related circles be specified as a formula?
1
intersecting lines in the projective plane
4
Can the median, angle bisector and the altitude of a triangle intersect to form an equilateral triangle?
1
How to find the intersection of two circles
1
Placing n equally-sized circles and one larger circle inside the circumference of larger circle