With that being said, I'm not entirely sure how to apply this method to $L(K_4)$, where $L(G)$ denotes the line graph of a simple graph $G$. This is a 4-regular graph of order 6 - so does any vertex have an orbit of size 6, since each vertex has the same degree? Or does its orbit vary and have something to do with its neighbouring vertices? How can we find the orbit of a vertex by inspection?

Does any vertex have an orbit of size 6, since each vertex has the same degree?

There is indeed only one vertex orbit, containing all six orbits of $L(K_4)$. However in general vertices having the same degree is not sufficient for them to be in the same orbit under automorphisms. For example suppose you add a leaf node to the path graph $P_5$ incident at one of the two noncentral nonleaf nodes; this will leave two vertices of degree two which are obviously not in similar positions in the graph. Of course two vertices having the same degree is a necessary condition.

Some authors may summarize this argument simply declaring there is one orbit "by symmetry."

Here is a geometric interpretation. The $K_4$ graph can be interpreted as a tetrahedron, whose full symmetry group $T_h$ has $12$ rotations (two $120^{\circ}$ rotations for each of the four faces, a $180^{\circ}$ rotation for each of the three opposite pairs of edges, and the trivial element) and $12$ reflections (one for each diagonal line on a face), corresponding to even and odd permutations of the four vertices (respectively). We can say $T\cong A_4$ and $T_h\cong S_4$. Moreover, every symmetry of the tetrahedron induces an automorphism of the graph, and $T_h\to\mathrm{Aut}(K_4)$ is an isomorphism. 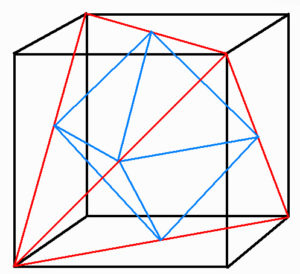 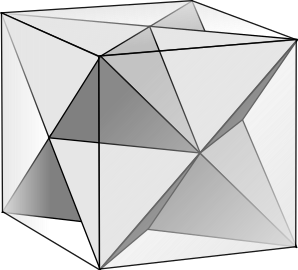 Note that the dual tetrahedron flips around the original's vertices and faces. That is, if one connects the midpoints of the faces of the tetrahedron according to which faces share an edge one gets a dual tetrahedron. If one rescales the dual tetrahedron until it's the same size as the original, their overlap will be the inscribed octahedron and their convex hull a cube (every cube has a dual pair of inscribed tetrahedra). The octahedron and the cube share the same full symmetry group $O_h$ in which $T_h$ is an index $2$ subgroup. If one applies one of the reflections in $O_h\setminus T_h$ it swaps the two tetrahedra but preserves the octahedron, corresponding to automorphisms of $L(K_4)$ that does not come from an automorphism of $K_4$.

Let's start with this:

Does any vertex have an orbit of size 6, since each vertex has the same degree?

The direct answer to this is no. Just because all vertices of a graph have the same degree it does not mean the automophisms act transitively on the vertices. For example, imagine the disjoint union of a $3$-cycle and $4$-cycle. All vertices have degree $2$ but no vertex of the $3$-cycle can be mapped via an isomorphism to a vertex of the $4$-cycle. However, for $L(K_4)$, the automorphism does act transitively for another reason which we'll see in a moment.

Or does its orbit vary and have something to do with its neighbouring vertices? How can we find the orbit of a vertex by inspection?

Not the answer you're looking for? Browse other questions tagged group-theory graph-theory group-isomorphism automorphism-group graph-isomorphism or ask your own question.