A three digit number was decreased by the sum of its digits .Then the same operation was carried out with the resulting number,et cetera

A three digit number was decreased by the sum of its digits .Then the same operation was carried out with the resulting number,et cetera ,100 times in all .Prove that the final number is zero .

One method is very computational - where we look at the number of times 27,18,9 are removed from the original number (within certain ranges) and find a pattern etc.But this is tedious . Can someone suggest a more elegant proof.

combinatorics number-theory
share | cite | improve this question | |
asked May 28 at 7:07

The result is a number divisible by $9$, because

Doing it a hundred times, we necessarily fall on $0$...

...Under the condition that we have started from a number less that $900$ (thanks to Empy2 and quasi for pointing it).

Indeed, in fact, the "jumps" are not always from a multiple of $9$ to the immediate multiple of $9$ below it ("small jumps"), but happen to be multiples of $18$ ("large jumps"). Here is in particular what happens when we take a number in the slice $S_9$. It is included in one of the two sequences "coalescent" in $891$ :

In slices $S_{9}$ and $S_{8}$, using almost always "large jumps" instead of small jumps, we already "spare" ten small jumps which is what was needed to arrive at $0$ with at most a hundred jumps. It looks me not necessary to explain it with more words, but a graphic will help to capture in a single glance what happens in the cases of three numbers and the associated sequence of "jumps": 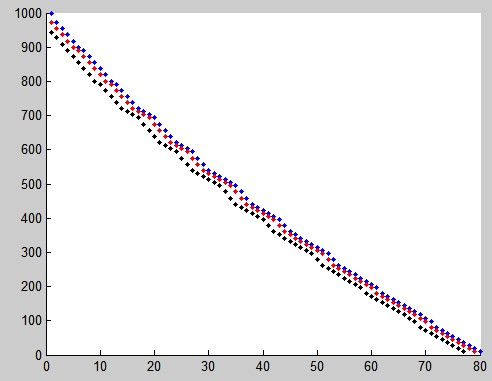 Let $k(n)$ be the number of iterations (number of applications of $f$) until zero is reached.

Not the answer you're looking for? Browse other questions tagged combinatorics number-theory or ask your own question.

1
9-digit ternary sequences with no three consecutive digits that are the same
5
How many strings of four decimal digits that do not contain the same digit three times?
3
How many total monotonous numbers are there?
1
Why digits in between doesn't change the difference sum and only 1st and last digit matters
0
How much money would it cost to “buy out” every possible number in the 6-digit Lottery?
7
When the product of a multi-digit integer and its mirror is a palindrome, can the original number have digits greater than $2$?