So a projection $P$ is a linear map such that $P^2 = P$. If we don't require linearity, then there are other examples of functions $f$ such that $f^2 = f$. For example, the floor and ceiling functions. If $f: \mathbb{R} \to \mathbb{R}$ and we require continuity, it seems that the image is a closed interval and $f(x)=x$ for all $x$ in the image.

I'm wondering if there are any examples of idempotent maps that are not continuous but also not piecewise constant?

This a “frame challenge” answer — it seems the restrictions in the question are partly motivated by a misconception, and so this doesn’t answer the question as written, but may give another answer to its original motivation. The question says “If $f : \newcommand{\R}{\mathbb{R}}\R \to \R$ and we require continuity, it seems that we basically get the identity function”, and it seems this is the motivation for including “non-continuous” in the question.

However, continuous idempotents don’t really have to be close to the identity function, except to the same extent that all idempotents do. The question links the claim to a nice answer which shows that:

which is true, but a little misleading — regrouping makes the dependency of the conditions clearer:

That is, all idempotents are somewhat like the identity; and non-constant differentiable idempotents are precisely the identity; but continuity doesn’t force the idempotent to be any more identity-like than it already had to be. So if the original motivation was partly just “interesting, non-trivial examples of idempotents”, then there’s no need to exclude continuous ones. 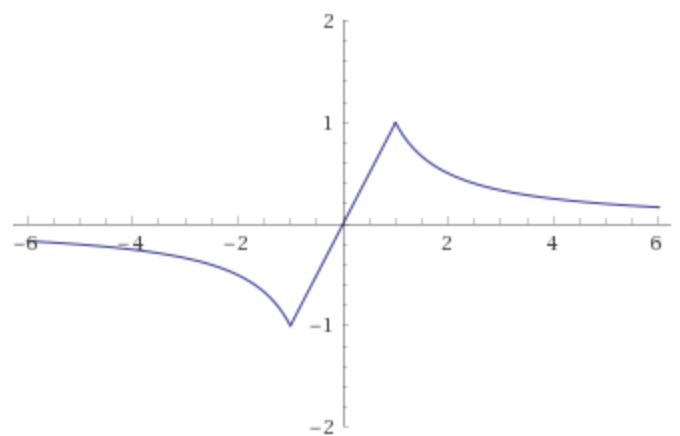 N.S.’s answer gives a general explanation: an idempotent function on $\mathbb{R}$ can have an arbitrary subset $S$ of $\mathbb{R}$ as its image (and on $S$ it must act as the identity), and then on the rest of $\mathbb{R}$, it can be an arbitrary function $\mathbb{R} \setminus S \to S$. So for continuous examples, take $S$ to be any closed interval, and then $f$ on $\R \setminus S$ (which must be the union of 0, 1, or 2 half-infinite open intervals) can be any continuous function into $S$ that fixes the endpoints of $S$.

Not the answer you're looking for? Browse other questions tagged real-analysis functions or ask your own question.

2
What are some examples of Idempotent functions?