Tower of subobjects associated to a spectral sequence

Everything here is taken from spectral sequences noted by Daniel Murfet (see here).

I provide relevant excerpts through screenshots: 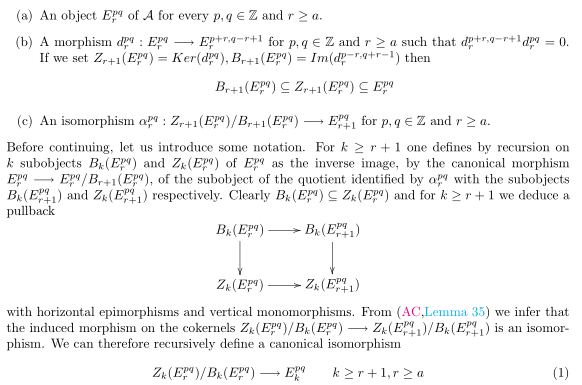 The problem is I don't understand how $B_k(E^{pq}_r)$ and $Z_k(E^{pq})$ are defined. I understand that an inverse image is a pullback along a subobject. Weibel does something similar, but doesn't provide a construction.

(the beginning part is not necessary since you say you already know how that is defined, but I'm just recalling this for people who might come across your question and not know this)

you get that $A\times_B C\to A$ is a subobject (monomorphisms are stable under pullbacks), which you can call "the inverse image of $C$ in $A$" (the morphisms being implicit but of course an essential part of the definition)

Not the answer you're looking for? Browse other questions tagged category-theory proof-explanation homological-algebra abelian-categories spectral-sequences or ask your own question.

0
Unveiling the definition of a spectral sequence: filtrations of $E^{pq}_r$
1
Subobjects of quotients in an abelian category