The area of a spherical triangle with angles $\alpha$, $\beta$ and $\gamma$ on the 2-dimensional unit sphere is $\alpha + \beta + \gamma - \pi$. There is a nice geometrical proof of this fact that only uses the fact that the area of the whole sphere is $4\pi$, and the intuitively obvious fact that two great circles that cut at an angle $\alpha$ (necessarily in two antipodal points), bound two slices whose common area is $4\alpha$.

To prove it, you can construct three such (pairs of) regions, that together disjointly cover the sphere except for the triangle and its antipodal image, which are both triply covered, from which it follows. The following image, from Jeffrey Weeks' The Shape of Space, make it very clear: 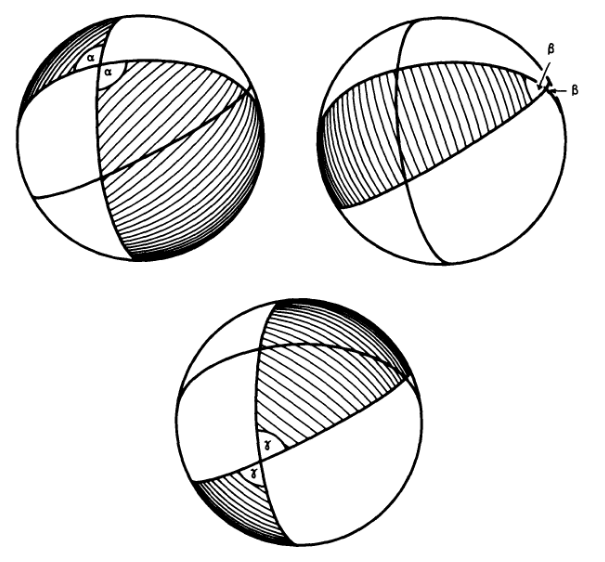 The kind of answer I would like to see is a proof in which you obtain the area of a general triangle in terms of this reference area in some clever way by applying isometries and the fact that the area of a disjoint union is the sum of the areas, and little more (no integration).

Edit: The question is already asked and the same answer appears here: Area of a triangle $\propto\pi-\alpha-\beta-\gamma$

There is in fact a more general argument. For a convex n-gon in the plane, sphere or hyperbolic plain. consider its defect $\delta$ which is defined as $K(-(n-2)\pi+\sum \alpha_i) $ Where $K$ is the curvature. The defect is in fact a positive measure on the space of convex polygons! Indeed, one has:

1) It is positive (possible to prove),

2) It is invariant under isometries,

3) If a big polygon is divided into two smaller ones, then the sum of their defects equals to the defect of the big polygon.

One can show that there is only one such function up to proportion, and obviously the area function satisfies 1)-3). Therefore the defect is equal to the area up to a constant, which can be calculated by looking at one triangle.

Finally, I remark that a more modern approach to these questions is to use the Gauss-Bonnet theorem.

Not the answer you're looking for? Browse other questions tagged geometry riemannian-geometry area surfaces hyperbolic-geometry or ask your own question.