How does the surface area of a rigid square piece of a metal traced on a sphere compare with the area of that piece of metal?

Scenario One -- laying down a flexible piece of paper onto an sphere, and tracing the resulting shape

Suppose I have a 1cm x 1cm piece of paper, and a sphere that is somewhat larger (for example, a sphere about the size of an orange).

Suppose I then use a maker to trace a shape onto the orange, by tracing around where the edges the piece of paper touch the orange.

Scenario Two -- rolling a rigid piece of metal onto a sphere, and tracing the resulting shape

Suppose, now, that I have a rigid square piece of material (such as a piece of metal) that cannot be bent, that is 1cm x 1cm, and a sphere that is about the size of an orange.

Suppose I use this piece of metal to trace a shape onto the orange in the following way:

Main Question: A shape now is "traced" onto the orange. Is its surface area less than, equal, or greater than 1 square centimetre?

I have trouble even making a guess! (I welcome any observations that may help me visualize certain properties of this scenario, even if they don't provide a mathematically rigorous explanation. I especially welcome explanations that use high-school (or earlier) level mathematics.)

Indeed, I can't even make a guess about what shape is traced! Are the corners of the traced shaped right angles? If looking directly down at the shape (ie from a bird's-eye-view, as if your eye, the centre of the shape, and the centre of the sphere, made a straight line), would the shape look like a square? I can't visualize this!

Similar Questions I asked myself, as attempts to gain an understanding of the Main Question

Scenario Three -- tracing a rigid square onto a cylinder

Suppose a trace a shape onto a cylinder in the following (obvious) way:

I am somewhat confident that the surface area of the resulting shape would equal one square centimetre:

Scenario 4 -- Tracing a square onto a cone

I am not confident in my guess here. My guess is that the shape traced onto the curved part of the cone will have a surface area equal to the area of the square.

However, I have trouble even visualizing the tracing process.

Suppose I start with the cone resting on the table (ie, with the circular face of the cone flat on the table). I note that I can choose a line on the curved surface of the cone, that runs from the tip of the cone down to any point on the edge of its circular face. I then start by placing the square onto the cone, such that the midpoint of two opposite sides of the square align with the "line" on the cone that I chose earlier. I can then do an obvious "rolling" motion of the square, once going right, and once going left, to trace out a shape onto the cylinder.

But I am unsure if I can visualize the shape created:

The traced area of metal square of side $1$ cm will be exactly $1\text{ cm}^2$ on both the cylinder and cone because as indicated by @TonyK (and also by @Narasimham) they can be flattened. So in this answer I will explain what I did to find out what the traced area of the square on a sphere will be.

Imagine a sphere of radius $R$ and place a square of side {2 a} on top of it (the north pole). Now tilt the square (as described by @silph) in a direction making a angle $\phi$ with the $x$ axis, where $0 \lt \phi \lt \dfrac{\pi}{4} $, then the radial distance from the center of the square to its perimeter along this direction is

That's all the necessary math, at the final step, I set up a double integral in $\phi$ and $\theta$ to find the area, taking symmetry into account introduces a factor of $8$.

I think the area would shrink in the same manner the piece of paper had. If you think about it, in the paper case, the distances of the points of the perimeter of the square to its center are not different between the flat and the curved square. Once projected on the sphere, every line you trace on the paper that connects the center to its perimeter, still has the same length if you remove it from the sphere and flatten it again. So the paper one is a process that does not change the length of radial lines but does it for every other line. The thing would be different if the paper process or the metal one changed radial distances, but I'm assuming it doesn't and with that assumption the two projections would be equivalent imo. Hope I've been clear and tell me what you think about it, cheers :)

You have done an excellent job of describing your problem!

Scenario One is clear: the resulting area is less than 1 cm$^2$, because of the wastage in the paper.

Scenario Two is identical to Scenario One, if I have understood your procedure correctly. The boundary of the shape will be the same in both cases.

Scenarios Three and Four are different. Both a cylinder and a cone can be cut along a straight line and flattened into a plane. So in both these cases, the resulting shape will be unchanged from the original 1cm square.

Here's a description of the figure obtained by moving the metal square over a sphere of radius $\ r_s\ \big(\,>\frac{1}{\pi\sqrt{2}}\big)\ $ (your scenario $2$), and a proof that its area is less than that of the square. The figure will comprise $8$ congruent octants, each generated from one of the octants of the square. It is sufficient to describe one of these octants and show that its area is less than $\ \frac{1}{8}\,\text{cm} ^2$.

When $\ r_s=\frac{\sqrt{2}}{\pi}\ $, the diagonal of the square is large enough to reach halfway round the circumference of the sphere. The figure no longer has any sharp corners in this case, because the angles at the points of maximum curvature have become perfectly straight. 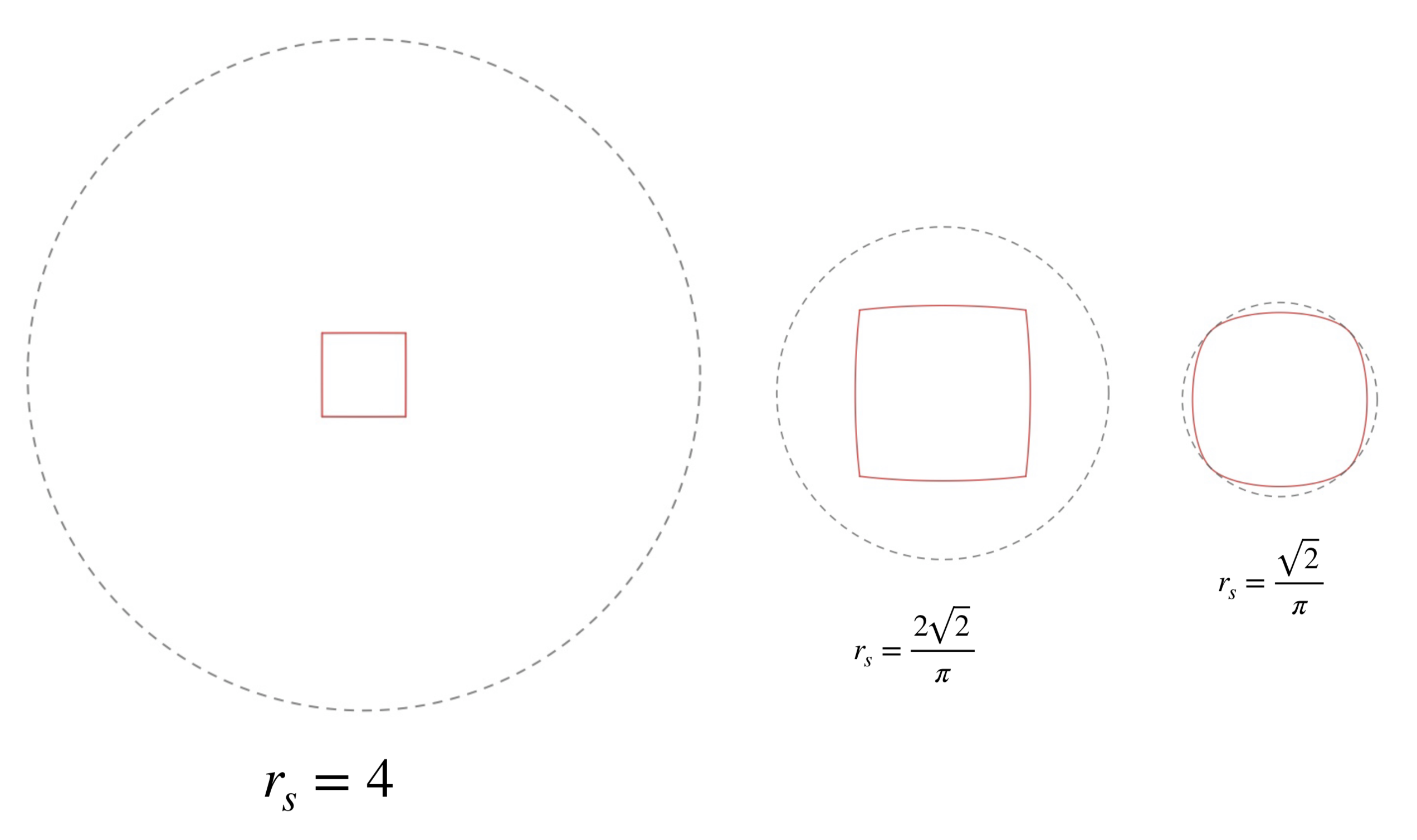 The applicability of surfaces is studied after high school, at the university/college..

Draping a small square on a cylinder or cone is possible because the same zero Gauss curvature matches.

Full draping or application between a plane and spherical orange surface is not possible by Egregium theorem in Differential geometry. Attempting such a drape/cover involves less than 100% contact of given square area.

Draping a one square centimeter on the surface area of 100 mm sphere diameter is uninteresting to me due to small patch size.

However the following addresses an approximate procedure when $ a=100 mm X 100 mm $ like sizes of paper and is indicated to start a covering. It may not be fully satisfactory. Happy to answer fwiw due to your motivation and description of the task. Never mind the bounty.

Draw sine curve as indicated, calculate pole to equator distance. Prepare 8 of sine profiles starting 10 mm wide at north pole and 40 mm at equator, and laying them side by side and glue edges.

Label the corners of the square ABCD clockwise. Without loss of generality, place the square with corner A at the top of the sphere. Let corner C be azimuth zero in Or scaling up the sphere to the Earth and the metal square to the size of Ireland(-or-so): A is at the North Pole, C is in the direction of the prime meridian to London, B is in the direction of Moscow, and D is in the direction of Brasilia. ​(Insert usual reference to the riddle about being somewhere on the Earth, walking south, west, north and ending up at the same point: where are you?. And note the science fiction story by Stephen Baxter in which the geometry of the Earth is not a scaled-up version of the geometry of an orange.)

For an intuitive appreciation that the area of the traced shape is the same, take a view that is face-on to the prime meridian. Form terraces along the parallels - imagine cutting into the side of a mountain to make terraces for agriculture, or that you're on stage looking out to an amphitheatre.

Alternatively, to understand that the 'roll-unroll' process is area preserving - rather than working with a square, work with a circle of radius $1/2$. That way, we can just view the process edge-on and see that you're just tracing out a segment of the perimeter of a circle.

What does the traced object look like? The (images of) AB and AD are easy - they follow the meridians (to Moscow and Brasilia). The tricky ones are BC and DC. We have that BC departs from (the image of) B along the parallel through B (at right angles to the meridian) because that's what the corner of the square does. The same happens for DC. So if you were to turn the sphere so that the great circle arc from B to C is directly in front of you, the image of BC would be inside the great circle arc. Likewise for CD.

Not the answer you're looking for? Browse other questions tagged area spheres or ask your own question.

2
Surface Area of a Sphere Without Calculus
1
surface curved shape
1
Area cylinder limited by cone
7
Surface optimization for a volume
82
What does "surface area of a sphere" actually mean (in terms of elementary school mathematics)?
2
Find the total surface area..
2
Formula to calculate surface area of an irregular shape
5
Compare volume of cylinder and sphere with same surface area.