Having a bit of a problem calculating the volume of a take-away box: 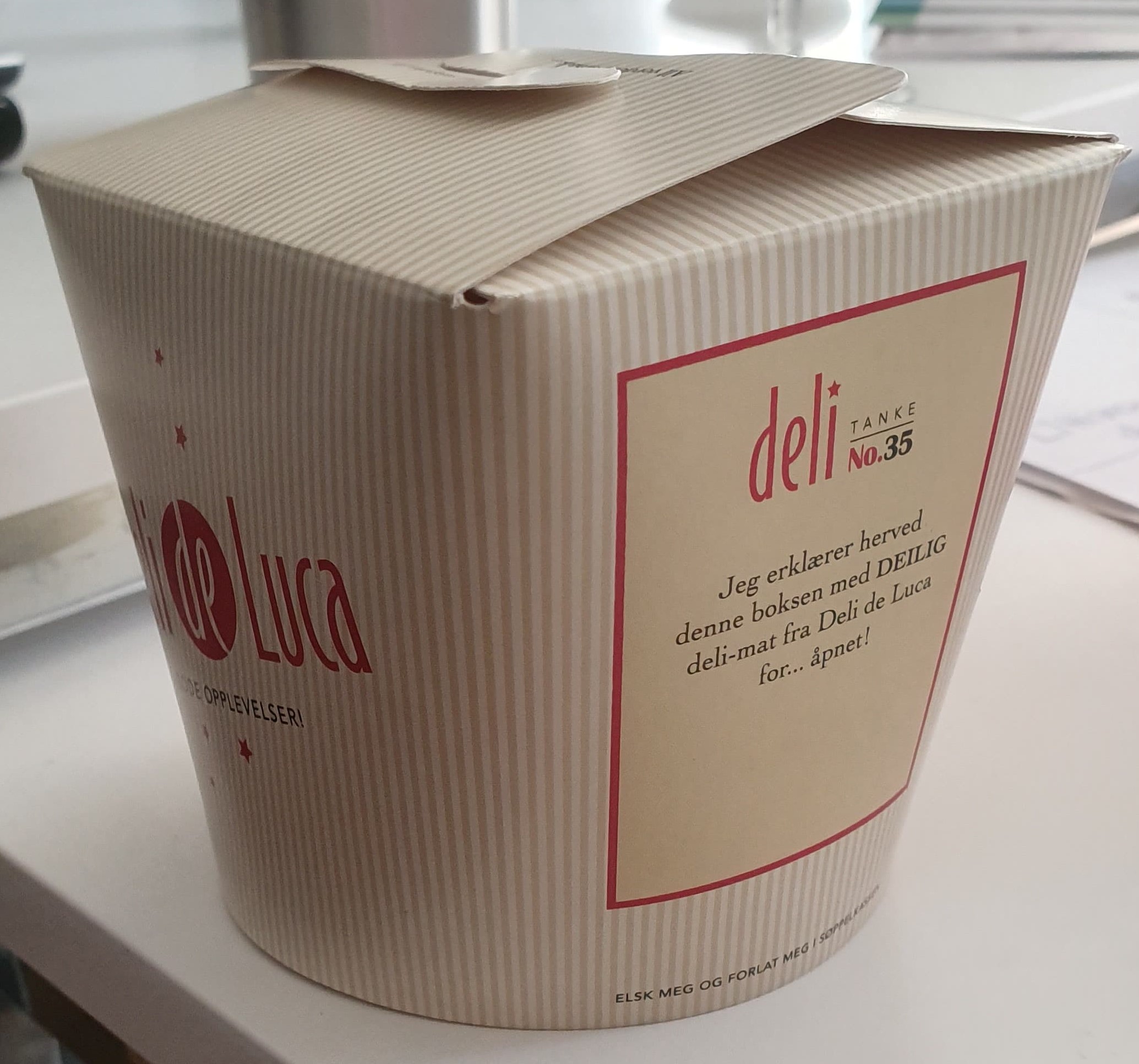 I originally wanted to use integration to measure it by rotating around the x-axiz, but realised that when folded the top becomes a square, and the whole thing becomes rather irregular. Since it differs in circumference I won't be able to measure it like I planned.

Is there any method or formula that can be used to measure a shape like this, or do I just have to approximate a cylinder and approximate a box and add those two together?

As the shape of the solid is not clearly defined, I'll make the simplest assumption: lateral surface is made of lines, connecting every point $P$ of square base to the point $P'$ of circular base with the same longitude $\theta$ (see figure below). 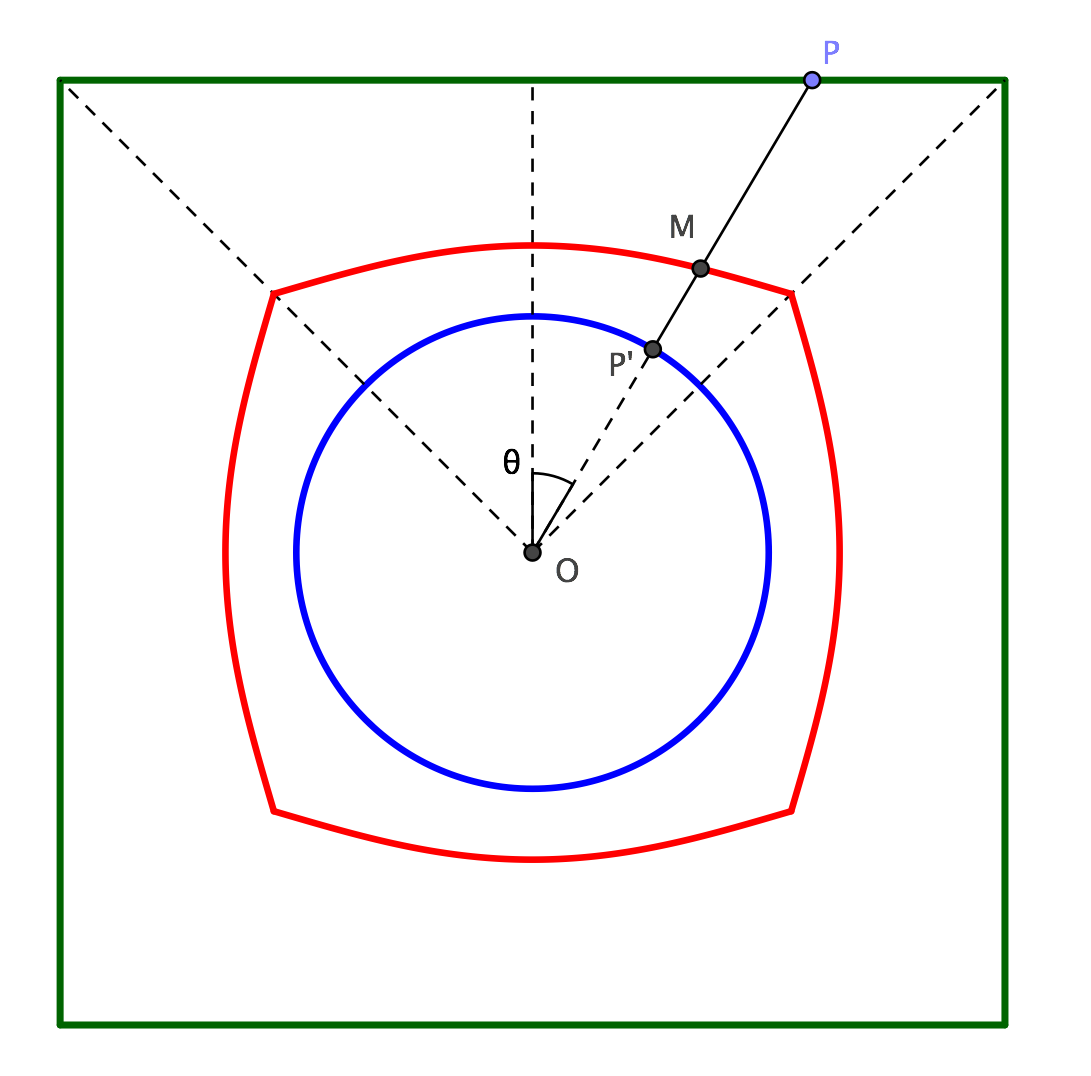 A different approximation could be to take the cross-section at each height not as a linear interpolation between top and bottom surface, but as squares with rounded corners. This fits the photograph more closely, as the linear interpolation approach has a discontinuity in the radius of curvature at the bottom: The point that at the top is an edge of the square is modelled a crease along the entire side, while in the photograph, no such crease can be seen. 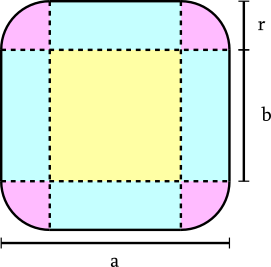 If we take the cross-section to have the above shape of a rounded square, we can calculate its area by using the formulas for circles and rectangles:

Using $b=a-2\cdot r$, we can eliminate that variable:

or, better ordered for integration:

Which gives us then:

And here is a quick render of what this looks like in 3d: This result can be obtained classically without any integrals as well, using only the formulas for the volume of conic solid and for cuboids. To do this, we split the solid into nine parts: The central, yellow part is simply a square pyramid, and has a volume of $\frac{1}{3}\cdot h_0\cdot a_0^2$. The four magenta pieces are oblique cones with a quarter-circle as base. Again, using the formula for conic solids, their volume is each $\frac{1}{12}\cdot h_0\cdot\pi\cdot r_0^2$

And the four cyan pieces are irregularly shaped tetrahedrons, but we can determine their volume by adding a few pieces to see how they fit into a cuboid of the measurements $a_0\times r_0 \times h_0$: Putting it all together, we get the volume as:

A more smooth model along the same lines would be to interpolate superellipses between the bottom and top, which similarly would give a creaseless change in the radius of curvature beneath the corners. However, superellipse areas have a formula involving the gamma function, and are therefore not easy to integrate again to get a volume.

Since it differs in circumference

Are you sure about this? One thing to note about the box is are the vertical stripes. Your image suggests that they have equal width and I see production- or design-wise reason why they shouldn’t have. However, this would make stacking them impossible (as noted by AlienAtSystem), if the boxes come partially pre-folded – which is hard to say. For this answer, I assume that cross sections of the box must have the same circumference, in particular the bottom and the top.

Since there is little difference between the top and bottom area ($\frac{A_\text{bot}}{A_\text{top}} = \frac{4}{π} ≈ 1.27$), this approximation should suffice for most practical purposes.

¹ One might argue that it is the square root of the area should change linearly, as it does for cones, pyramids, and similar, but that is as much an assumption as a linearly changing area, given that we have bulging and similar.

One can of course try to model the takeaway box as an appropriately constructed surface, and then compute a volume integral based on that.

My surface synthesis proposal uses this polar equation for a regular polygon (specialized to the square case) as a component, and I model the construction of the takeaway box as a linear interpolation between a circle of radius $r$ and a square with side length $2a$, and $h$ is the height of the box. The parametric equations can the be expressed as (written out in vector form to emphasize the components):

Here is a plot of the surface using Mathematica: 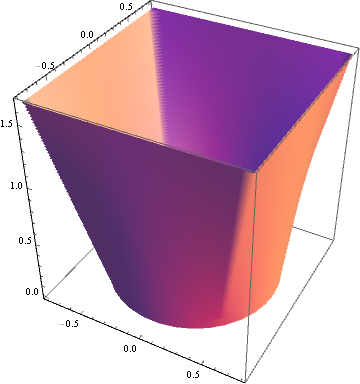 This surface isn't a perfect model, however. If you compare this surface with the box in the OP's picture, you'll notice that the transition from circle to square is a little more abrupt. One could try using a different transition to ease the edges in the box, but I'll leave the experimentation to someone else.

Discussions in the comments have identified two conditions which should be fulfilled for a valid model of the box given that it is constructed from cardboard:

A class of objects which automatically fulfil these conditions are prismatoids, which are polyhedral solids whose vertices lie on two parallel planes: 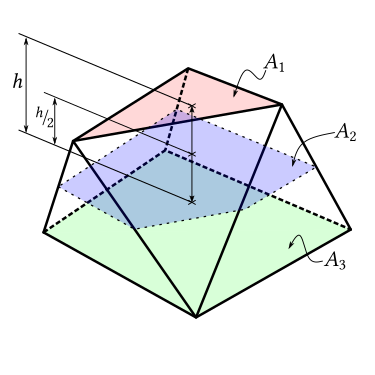 Their lateral faces consist of triangles or trapezoids, which are automatically flat, and since there are no vertices in between the top and bottom surface, and therefore any lateral face can only connect to two neighbouring lateral faces, we can also unfold its lateral surface into a flat shape by "hinging" along the edges.

The prismatoid model can also be used as approximation for not polygonal top and bottom surfaces, by approximating them by increasingly fine polygons. For example, the model used by Aretino and J. M. can be approximated by a prismatoid by creating vertices at top and bottom positions corresponding to evenly spaced values of $\theta$. The model examined in my other answer can be approximated by taking evenly spaces vertices along the circle and connecting each to the closest corner of the square.

The good thing about prismatoids is that they have a very simple formula to calculate their volume, which requires one to know only the values of the area of the cross-sections at the top ($A_1$), bottom ($A_3$) and at half height ($A_2$). Then, the total volume of the solid is:

In fact, by following the second condition to its conclusion, it can be shown that any model using the prismatoid approach must have in the end a volume formula of the shape:

As it turns out, the maximum $A_2$ is actually the one given by my other answer, as the described shape is actually the convex hull of the points on the circle and the square (something I'll state without proof because it should be easy enough for yourself to convince yourself of that fact), which has a $\gamma$ of $\frac{2}{3}$.

And for the prismatoid with the minimal $A_2$ (excluding self-intersecting or twisted models, because they don't agree with the problem as posed), I nominate this one: 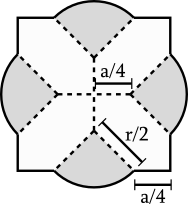 I can't prove that connecting each circle point to the closest midpoint of the square gives the least area, but it seems likely, as moving any one connecting appears to increase the cross-section.

The area, as can be shown by simple calculation of the square and circle segment areas, is:

Plugging this into the volume formula gives:

How much does choosing the model then actually matter?

Or, in floating point units:

Or in other words, the choice of exact model changes the result in volume by at most 10%.

There is technically a "best" model among all possible choices of prismatoids, which is the one whose lateral surface is unrolled into the closest approximation of a circle ring sector, which is the lateral net of a truncated cone, the shape of the takeaway box before the top is folded, and a deformation of the paper which does not tear it has to preserve the net. However, I will not attempt to find which $\gamma$ this then results in, and only, based on the shapes of the models examined already, assume it is rather close to $\frac{2}{3}$.

Not the answer you're looking for? Browse other questions tagged integration geometry volume or ask your own question.

57
Is there an equation to describe regular polygons?

14
Can any higher-dimensional Spheres be rotated everywhere equally?
1
Calculate volume of wooden logs by top and bottom perimeter length and total length
254
What is the maximum volume that can be contained by a sheet of paper?
0
The area of a truncated pyramid with irregular top and bottom surface, given the height $h$
1
Calculating the volume of an Elliptical tank, where the top and bottom ellipse are different sizes
1
Calculate the volume of mount Fuji using the disc method.
1
Rotating an L shape of 3 points so that it always faces a certain way.