If all 2-faces of a polytope are $2n$-gons, is the edge-graph bipartite?

I wonder if I can see easily whether the edge graph of a (convex) polytope $P\subset\Bbb R^d$ is bipartite or not.

Question: If all 2-faces of a polytope are $2n$-gons, is the edge graph of $P$ bipartite?

It is certainly true for $d=3$, as the cycle space of the edge graph of $P$ (a planar graph) is generated by the facial cycles.

The argument must make use of convexity or the spherical topology of $P$, as one can easily find polytopal complexs for which this statement is false (e.g. see the image below, which is taken from here). 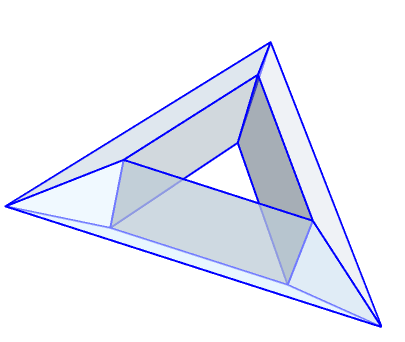 H.S.M. Coxeter proves this in section 8.6 of his book Regular Polytopes. In section 1.6, he shows "that alternate vertices of any even-faced simply-connected map can be picked out in a consistent manner (so that every edge joins two vertices of opposite types)." He proves this by observing that any circuit of $N$ edges decomposes the map into two regions. Replacing one region by a single $N$-sided face, all faces but this one have evenly many sides, so $N$ must be even (since the number of odd faces must be even.)

Then in 8.6, he states "In fact, the argument used at the end of §1.6 may be extended to any number of dimensions, with the conclusion that alternate vertices of a simply-connected polytope or honeycomb can be selected whenever every face $\Pi_2$ has an even number of sides."

I will just quote the section:

...a circuit of edges can be shrunk to a point without leaving the manifold (i.e., without leaving the "surface" of the polytope). In other words, such a circuit is (generally in many different ways) the boundary of a two-dimensional region or "2-chain," consisting of a number of $\Pi_2$'s fitting together in such a way as to be topologically equivalent to a circle with its interior, or to the curved surface of an ordinary hemisphere. If the circuit consists of $N$ edges, we can transform the 2-chain into a complete topological polyhedron (or two-dimensional map) by adding one $N$-sided face. Hence, by the remark at the end of §1.4, if every $\Pi_2$ has an even number of sides, the number $N$ must be even too. Finally, we select those vertices of the polytope or honeycomb which can be reached from a given vertex by proceeding along an even number of edges.

Start with a single vertex $V$, color it black.

Claim 1: Fix a vertex $v$. The parity of the distance between any vertex $v$ and $V$ is a constant.

Corollary: Each vertex $v$ can be properly colored based on the parity of the distance to $V$.

I'm less confident about this part.

Claim 3: In a convex polytope (no holes), any edge-cycle splits the polytope into 2.
(In a sense, we want a "separating hyperplane" here, but ...)

Proof: Since we're in $\mathbb{R}^d$, orientation exists. We can walk around the cycle with a "left" and a "right" side.
For any vertex that is directly connected to the cycle on the left (resp right), color it red (resp blue).
For any vertex not on the cycle that is connected to another colored vertex, give it that color. Repeat until all of the vertices are colored (which is possible because the the vertex graph is connected).
If a vertex can inherit 2 colors, then there must be an edge that cuts within this cycle, which contradicts how convex polytopes are defined (?).

Not the answer you're looking for? Browse other questions tagged combinatorics geometry graph-theory polytopes bipartite-graphs or ask your own question.

11
Find all cycles (faces) in a graph
8
For a Planar Graph, Find the Algorithm that Constructs A Cycle Basis, with each Edge Shared by At Most 2 Cycles
6
4 cycles in a cubic planar bipartite graph
5
When counting faces in a planar graph - when is each edge counted twice?
1
Hamiltonian cycle that contains a specified edge in a 3-connected cubic bipartite planar Hamiltonian graph
1
Planar graph has an euler cycle iff its faces can be colored with 2 colors
2
Is it true that if a graph is bipartite iff it is class 1 (edge-coloring)?
0
inadmissible bipartite graph
0
Help formulating a conjecture about the parity of every cycle length in a bipartite graph and proving it