Everyone meets everyone else.

Say I have a game in which $i$ players at a time can play, and I want to organize a tournament, inviting $n$ people. We play in rounds, so of course $i$ has to divide $n$ because winning by default is boring. Each round then consists of $n/i$ games played simultaneously, and of course no player plays more than one game at any one time.

Now, to make iot interesting, I choose $n$ so that $(i-1)$ also divides $(n-1)$, and let the tournament consist of $\frac{n-1}{i-1}$ rounds in total. Is it possible in general to seat players so that everyone plays against everyone else exactly once during the tournament?

The background is that yesterday I took part in a tournament in a three-player game, with 15 participants. After five rounds I'm pretty certain no one had met anyone else twice, and I was curious whether it would possible to keep that record up for two more rounds. However, the tournament ended there, and I didn't pester the host with my petty theoretical mathematical questions.

In answer to your specific case of the $3$-player $7$-round tournament. The answer is yes. In fact, this is the famous Kirkman's Schoolgirl Problem. In general, you're seeking a resolvable BIBD (balanced incomplete block design).

Fifteen young ladies in a school walk out three abreast for seven days in succession: it is required to arrange them daily so that no two shall walk twice abreast.

Here's the solution on Wikipedia: 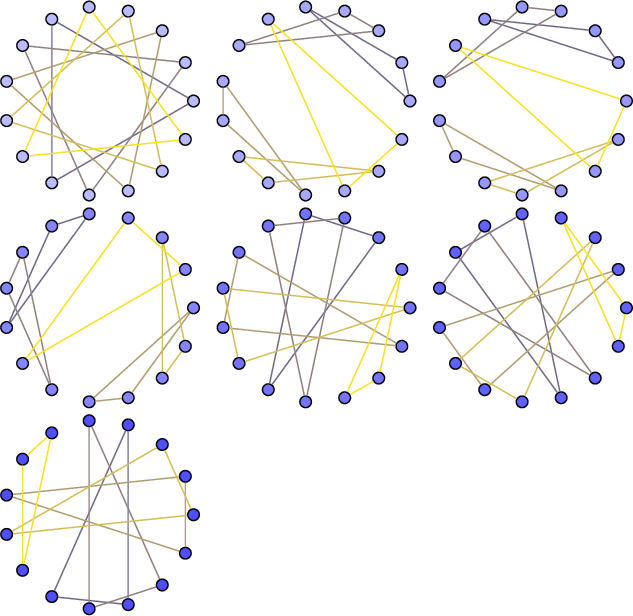 4
Rearrangement of groups such that no two members meet again
3
Is there a solution to this Seating Plan problem?
3
Dinner party courses needed to have everyone sit with everyone else (repeats allowed)

1
tournament of 8 people in teams of two, everyone teaming up once and competing twice?
0
A Probability Question From Real Life
3
possible outcomes for round-robin tennis tournament
4
Chart of Rounds for a Game
1
How to arrange tournament with 4 rounds for 100 players with each player playing game in group of 10?
3
How to make 28 players play 9 games each and all with each other
1
Tournament bracket for a 4-players game
3
The tournament involves 2k tennis players they play the tournament, each played with each exactly once .What is the minimum number of rounds you
2
How to calculate minimum number of games in round robin with more than two players per games