Are measurements using the first fundamental form preserved by re-parameterization?

I may be conflating a number of different concepts, but I am confused about measurements using the first fundamental form.

Here is what I think I know:

Here is what confuses me: 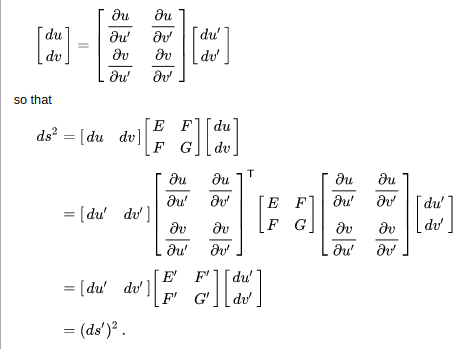 I believe that this text clears it up a bit (bottom of page 8):

In other words, arclength is preserved by isometric transformations. Spherical map projections are provably not isometric, so, sure, that's why $ds_{map}^2 \ne ds_{sphere}^2$. I think I follow this.

Why I'm confused is because I thought I followed the logic of proof on the Wikipedia page, and I don't understand why it wouldn't generalize to non-isometric mappings. All the same derivatives can be calculated through a spherical projection, for example.

So does arclength hold or not?

[Note: when answering this question, feel free to use the example of spherical projections, because it's something I think I understand fairly well. Also, I'm not a mathematician, so formal mathematical language, while likely the most accurate way to answer this question, is probably going to be lost on me.]

On $\dot S$ one might think of other coordinate systems, say $(x,y)$ in the vicinity of the south pole, or the $(\xi,\eta)$ furnished by $\sigma$. The latter is to be understood in the following way: Each point $P=(x,y,z)\in\dot S$ so far had geographical coordinates $(\phi,\theta)$, but $P$ obtains now new coordinates $(\xi,\eta):=\sigma(P)$. But we do not want to change the length measurement on $\dot S$. This means it is forbidden to write $ds^2_{\rm sphere}=d\xi^2+d\eta^2$. Instead we have to do some computation as quoted by you from Wikipedia, and we would then obtain $$ds^2_{\rm sphere}=G(\xi,\eta)(d\xi^2+d\eta^2)\ .$$ (In this example the resulting transformation formula is so simple because the stereographic projection $\sigma$ is conformal.) Note that in this second thought experiment we have not mapped one surface onto another, but we have (for whatever reasons) changed the local coordinate system on the given surface $\dot S$.

Not the answer you're looking for? Browse other questions tagged differential-geometry surfaces isometry or ask your own question.