Conics: why is the eccentricity and focal parameter well-defined, and how to show uniqueness of foci and directrices

The first question is important to me because we refer to "the" eccentricity and "the" focal parameter while I have been unable to find a source that proves that they are well-defined. As for the second question, there are several concepts such as the center of an ellipse, linear eccentricity, the latus rectum, and more that are easier to define or make well-defined if it is clear exactly how many focus-directrix pairs exist and where they lie.

An answer or a reference to a source would be greatly appreciated.

Consider an ellipse with focus $F$ and directrix $d$. The line through $F$ perpendicular to $d$ is an axis of symmetry for the ellipse (this is obvious from the definition): let $H$ be the point where this line meets the directrix.

This implies that the ellipse has a second axis of symmetry $s$, parallel to the directrix and at distance $p/(1-e^2)$ from it. The intersection of the axes of symmetry is the center $O$ of the ellipse. It follows that $F'$ and $d'$, reflections about $s$ of $F$ and $d$, also work as focus and directrix, with the same eccentricity $e$. 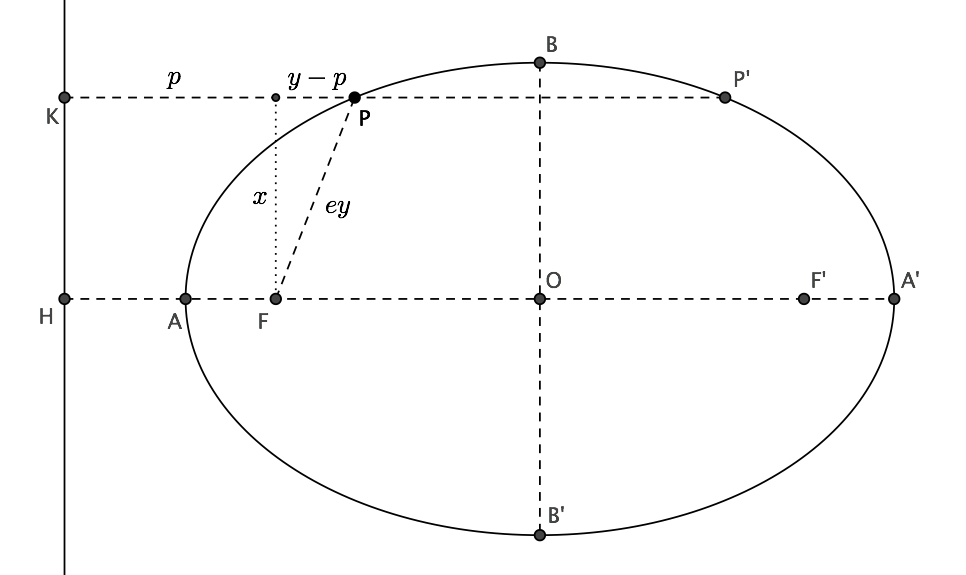 The case of a hyperbola is similar and is left to the reader.

As noticed above, the line $a$ passing through the focus and perpendicular to the directrix is an axis of symmetry for the conic section. This means that all chords perpendicular to $a$ are also bisected by $a$.

Suppose now that a conic section has another pair focus/directrix, in addition to the usual ones. This would imply another axis of symmetry $a'$, bisecting all chords perpendicular to it. But this is not possible for the reasons explained below.

1) In a parabola, the midpoints of parallel chords are aligned along a line parallel to $a$ but not perpendicular to the chords (unless of course this line is $a$ itself).

2) In an ellipse or hyperbola, the midpoints of parallel chords are aligned along a line passing through the center of the conic. This line is perpendicular to the chords only if it is the same as $a$ or the secondary axis $s$ discussed above.

To exclude the possibility $s=a'$, just observe that line $s$ doesn't meet the conic in the case of a hyperbola, while it meets an ellipse at the endpoints $BB'$ of the minor axis, which is always shorter than major axis $AA'$ (unless the ellipse is a circle). Hence any ellipse having its focus on $s$, directrix perpendicular to $s$ and passing through $B$, $B'$, cannot pass through $A$, $A'$. This concludes the proof.

Not the answer you're looking for? Browse other questions tagged geometry analytic-geometry conic-sections locus or ask your own question.