The concurrency property of the diagonals (semidiagonals) of bicentric polygons.

After answering a recent question where the collinearity of the points $X,O,I$ was proven in an elementary way, I rather soon came to the conclusion that the intersection point $X$ of the diagonals is completely fixed by the positions ($O,I$) and the radii ($R,r$) of the circumscribed and inscribed circles (i.e. the product $\sin\alpha\sin\beta$ in the cited answer is a constant for given $R,r$). After some algebra I obtained the following simple formula: $$ XI=\frac rR\sqrt{\frac{R^2+d^2-2r^2}2}, $$ where $d$ is the distance between the centers of the circumscribed and inscribed circles $OI$ (given $R$ and $r$, it is fixed by the Poncelet porism).

To my surprise I did not find any mention of the above formula in the online sources. But during the search I realized that the formula follows from a much more general statement cited in the above reference:

I am looking for a (possibly simple) proof of the above statement and/or reference to the original publication on this result.

Note: After I gave my partial answer, which included some handwaving, I found a reference to the requested proof, which I've added at the end.

The 4 vertex case isn't too difficult, and it suggests ways to attack the general case. 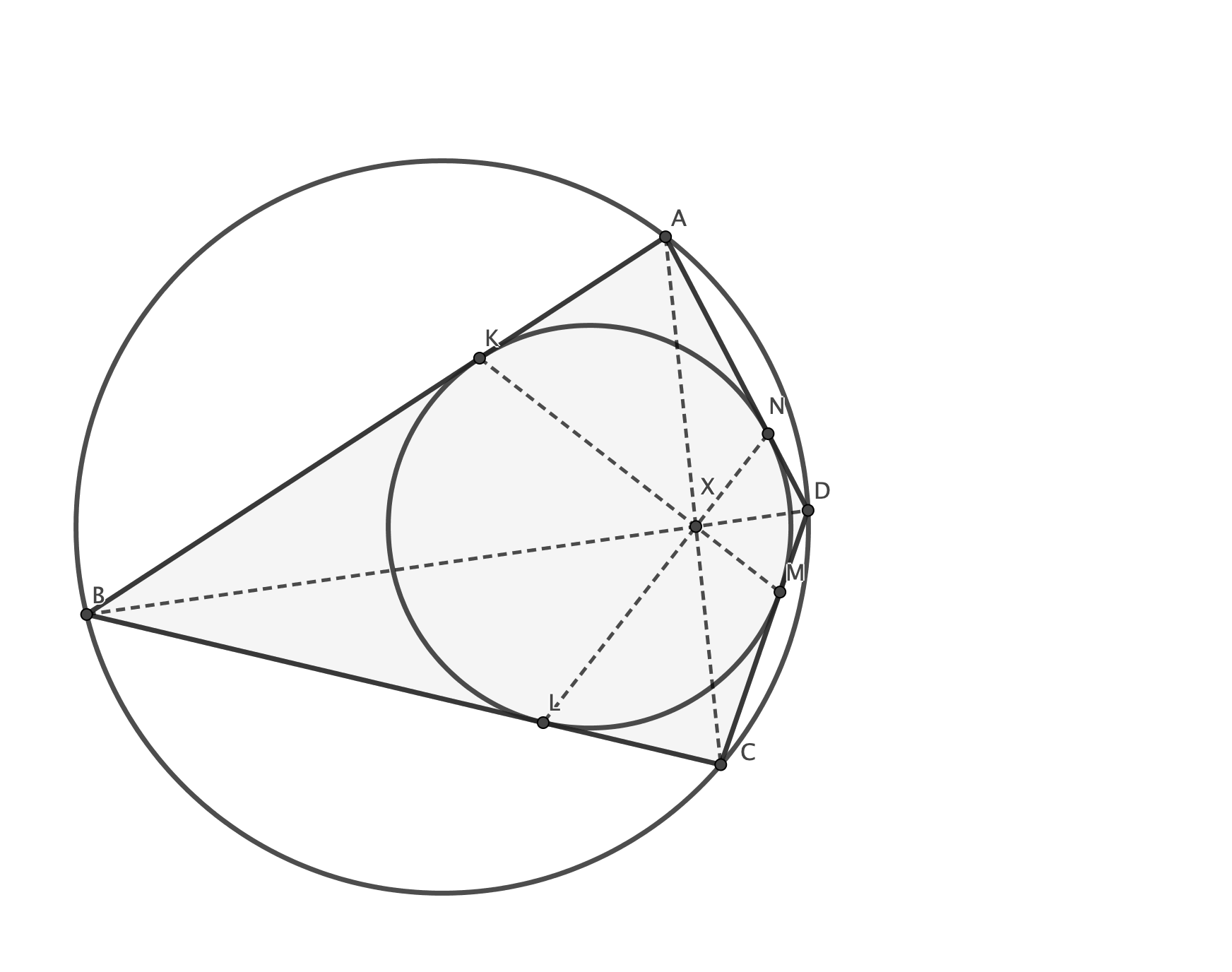 In the above diagram, $ABCD$ is a bicentric quadrilateral. Points $K,L,M,N$ are the touch points with the incircle. The diagonals of $ABCD$ and $KLMN$ meet at $X$. (see Yiu, Euclidean Geometry Notes, pg 157).

We want to show that $X$ is a limit point of the two circles. 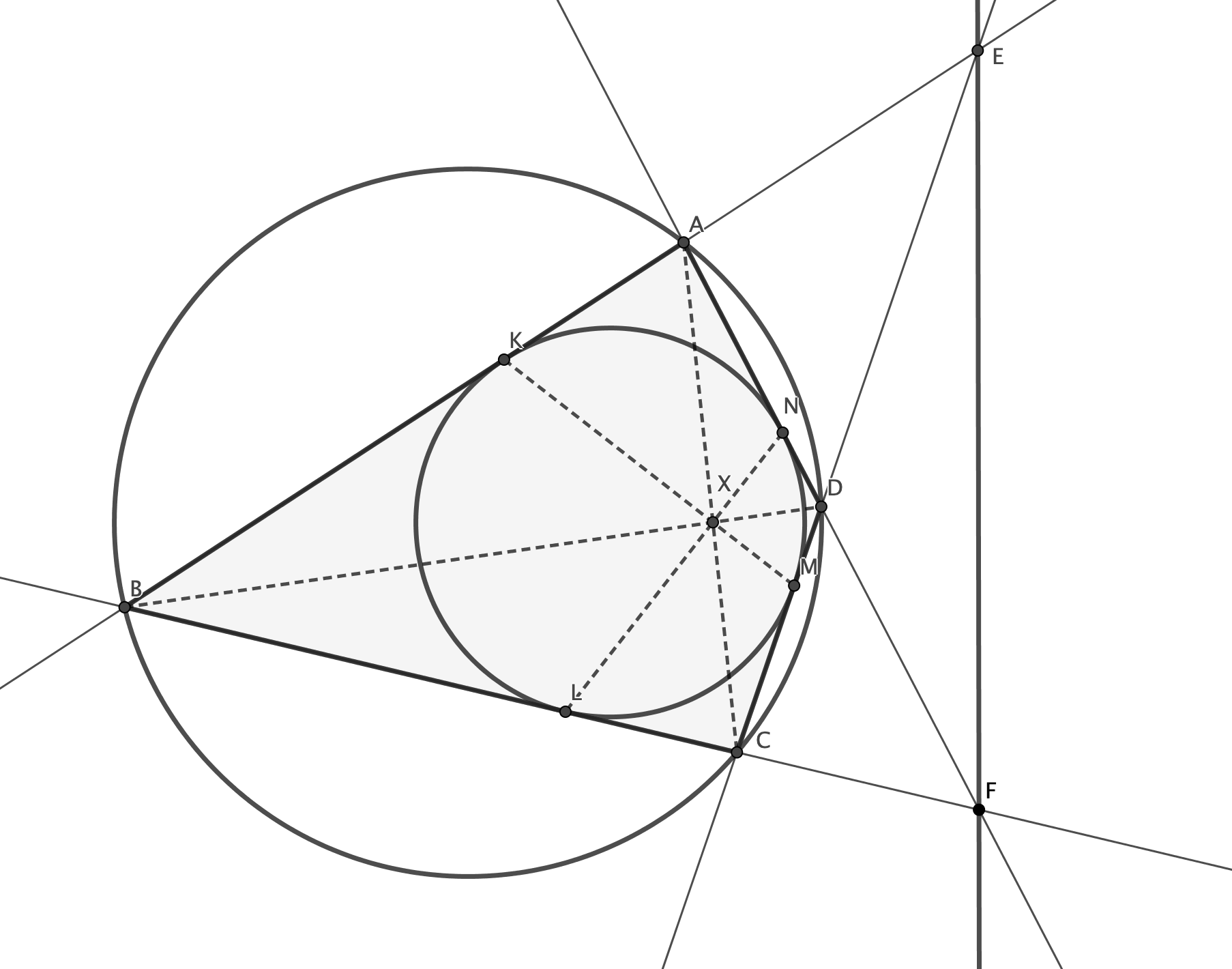 To do this we construct the polars of $X$ for the two circles. (see Weisstein, Polar ) Build the complete quadrilateral $ABCDEF$. Regarding the sides of $ABCD$ as tangents to the incircle, we get the construction of the polar $EF$ of $X$ with respect to the incircle. Regarding $A,B,C,D$ as the points where two lines through $X$ cut the circumcircle, we get the polar $EF$ of $X$ with respect to the circumcircle. Evidently the two polars are the same, which implies that both circles invert $X$ to the same point $X'$ (which lies on the polar). So $X$ is a limit point of the two circles.

Assume $n$ is even. For the case of the general $n$-sided bicentric polygon, if we assume that all principle diagonals are concentric at a point $X$, we can use a similar argument to show that $X$ is a limit point. This of course is just a partial result, because it remains to prove that the diagonals are concurrent.

Some further empirical observations and speculations. The setup for the quadrilateral case suggests a construction for bicentric-adjacent polygons (they are tangential, but not necessarily cyclic) that may be a useful avenue to a proof. Start with a circle $C$ (the incircle) and a line $p$(the polar). For even $n$ place $\frac{n}{2}$ points $P_i$ on $p$ and draw the $n$ tangents from these points to $C$. Then the intersections of adjacent tangents form a tangential polygon $P$ with the property that the principal diagonals are concurrent. But $P$ will generally not be cyclic. For example, when $n=4$ the polygon $P$ will be cyclic only if $\angle{P_1IP_2}$, where $I$ is the center of $C$, is a right angle. For general $n$ it remains to show that certain configurations of $P_i$ result in cyclic $P$, and that for a given combination of incircle and circumcircle if one bicentric polygon has concurrent diagonals they all do.

I've ignored the case $n$ odd. With any luck it follows from $n$ even.

Update: There's a proof at Halbeisen and Norbert, A Simple Proof of Poncelet’s Theorem (on the occasion of its bicentennial), Theorems 4.1,4.2

Not the answer you're looking for? Browse other questions tagged geometry reference-request polygons or ask your own question.

28
Proof that every polygon with an inscribed circle is convex?
0
Cartesian coordinates for vertices of a regular polygon?
6
Calculating radius of circles which are a product of Circle Intersections using Polygons
6
No polygon has the same area as the difference between its inscribed and circumscribed circles
6
Proof of $\angle$ sum of polygon.
1
finding diameter of circumscribed circle of an irregular polygon
1
Review on my method for $Number$ $of$ $diagonals$ in a regular $n$-gon is $\frac12n(n-3)$
3
Poncelet porism for two intersecting circles…
0
In Johnson circles, three lines each passing through the center of one of the circles and the $2$-wise intersection are concurrent.
2
How many triangles determined by three vertices of a regular $13$-gon contain the polygon's center?