What is known about the distribution of edge cuts in random graphs? E.g., in the following graph: 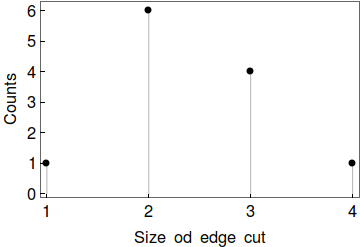 Actually, I'm interested in the distribution of edge cuts that produce exactly two components. But if that's too difficult, any number will also work for me. I'm interested in random graph with $200-2000$ vertices.

Let's consider the random graph $\mathcal G_{n,m}$ with $n$ vertices and $m$ edges, and try to count the number of $k$-edge cuts.

If we pick a random $k$-edge set and delete it, what we're left with is the random graph $\mathcal G_{n,m-k}$, it's just chosen funny. We could compute the probability that $\mathcal G_{n,m-k}$ is connected, and that would tell us the fraction of the $\binom mk$ $k$-edge sets that are cuts. But I'm going to get there indirectly.

When we're trying to figure out when the random graph is connected, there are three regimes:

This is a result usually proved in the limit as the number of vertices tends to $\infty$. But it's specifically true in your range of graphs with $n \in [200, 2000]$ vertices, if we start with about $5n$ edges and delete some. For example, experimentally:

The sum above is incorrect because it ignores overlap, but for small $k$, the overlap should be negligible, and for large $k$, almost all $k$-edge sets will be cuts.

In the middle range, the Poisson approximation is often used. (And actually, we can use it for any $k$.) To find the probability that a vertex in $\mathcal G_{n,m-k}$ is isolated, first approximate choosing $m-k$ edges exactly by choosing each edge independently with probability $p = (m-k)/\binom n2$. The probability that a vertex is isolated is $(1-p)^{n-1} \approx e^{-np}$, or $\exp(-\frac{2(m-k)}{n})$. So the expected number of isolated vertices is $n e^{-np}$. Call this quantity $\mu$. Then the Poisson approximation says that the probability of having no isolated vertices is about $e^{-\mu}$, which predicts that there are $(1 - e^{-\mu}) \binom mk$ $k$-edge cuts.

3
Properties of Connected Graphs
3
Show that a symmetric difference of edge cuts is an edge cut.
0
Symmetric difference of two minimal edge cuts is a cut.
1
Removal of cut edge disconnects this graph
4
Minimal edge cut
0
Prove that a edge-modified graph G' is connected if G contains a circuit
1
Prove that a spanning tree of a connected multigraph contains at least one edge of every edge-cut
1
Cut-Vertex and Cut-Edge in Connected Graphs
1
Prove that the deletion of edges of a minimum-edge cut of a connected graph G results in a disconnected graph with exactly two components.