Why is 'isomorphism' defined more generally in Category theory than in Abstract Algebra? 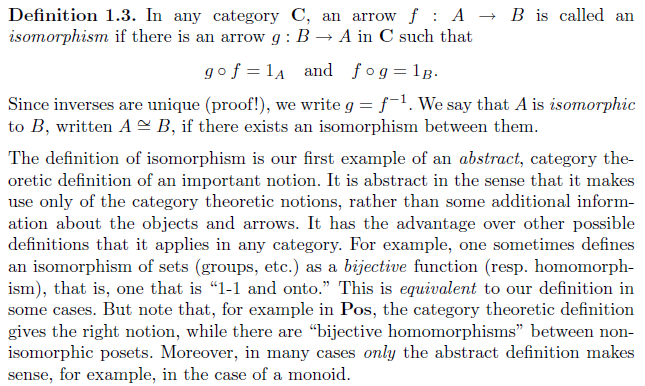 Notice that Awodey writes "Moreover, in some cases only the abstract definition makes sense, for example, in the case of a monoid", not "in the case of monoids".

For Awodey, a monoid is a category with one object, and the isomorphisms are the invertible arrows, i.e. the invertible elements of the monoid. Since the arrows aren't actually functions, it doesn't make sense to ask if they are bijective.

Note that he does not say

more general than the one in abstract algebra

... has the advantage over other possible definitions ...

As is discussed in the comments under your question, it is often the case that beginning abstract algebra students are taught that the meaning of "isomorphism" (of groups, rings, etc.) is "bijective homomorphism". That is false. It is a property that happens to characterize the isomorphisms of those particular objects, but that does not make it the definition. Some would argue that pedagogical concerns make this an acceptable falsity that, one hopes, will be corrected later.

Edit: Alex Kruckman has noticed what I think Awodey meant by his comment about a monoid. Though I think what I said below may still be helpful to you, so I'll leave it.

This is quite similar to the category of topological spaces. A bijective continuous map $f$ doesn't have to be an isomorphism (usually called homeomorphism in this category). It is an isomorphism iff the converse to continuity, namely openness, also holds: $U$ is open when $f^{-1}(U)$ is open.

But for algebraic structures it turns out that bijective morphisms are already isomorphisms (since one can check that the inverse map is also compatible with the operations).

Another example : there exists continuous bijective functions that are not homeomorphisms.

Not the answer you're looking for? Browse other questions tagged abstract-algebra category-theory or ask your own question.