What exactly is an arrow in a category?

The usual definition of a category states: a category $\mathbf{C}$ consists of:

Leaving aside what collection here means, I realized that I have never seen a clear definition of what an arrow in a category is. Surely, in the typical categories like $\textbf{Set}$, $\textbf{Top}$ or $\textbf{Grp}$ arrows are functions that ... But there are categories whose arrows are not "functions".

If you have a poset $(P,\le)$ then you can get a category whose objects are elements of $P$ and such that there is an arrow $x\to y$ if and only if $x\le y$ in $P$. Okay but what kind of "entity" is the arrow there?, is there a precise, rigorous definition or do just have to accept that there are objects and arrows and asume that they follow the required rules, just like we asume there some things called "numbers" that follow the rules of arithmetic?

I hope I made myself clear

There are already many excellent answers, but I want to add another perspective, already partly found in other answers, but I hope distinct enough to stand on its own.

I like to explain by analogy. Consider the question, "What is a vector?"

What is a vector?

Well, you might get you any of the following informal definitions as a response:

(a) a list of numbers, (b) a quantity with magnitude and direction, (c) a quantity that transforms like a vector under a change of coordinates.

(I think I might know some physicists who would take issue with me calling (c) informal, but oh well).

And you might then ask, well ok, but what's a formal definition of a vector?

Let's think of some examples of vectors. The elements of $\Bbb{R}^3$, the elements of $\Bbb{R}[x]$, continuous functions from $X$ to $\Bbb{R}$, where $X$ is a topological space. These seem like fairly different objects, but the common factor here is that a vector is simply an element of a set $V$ with a specified vector space structure. I.e., the formal definition of vector is simply an element of a vector space.

Why is this useful as a definition? Well, all of the properties of vectors are already encoded in the definition of vector space. So if I tell you that $v,w$ are vectors in $V$, and $r\in\Bbb{R}$ is a scalar, then you know that $v+w$ is also a vector, and that $rv$ is a vector, and that $r(v+w)=rv+rw$. All the properties of a vector that we might find interesting are encoded in the vector space axioms.

Bringing it back to arrows

Similarly, if I say $f:X\to Y$ is an arrow of a category $\mathcal{C}$. The rigorous definition of arrow here is simply that $f$ belongs to the collection of arrows $\operatorname{Arr}(\mathcal{C})$, and that the domain of $f$ is $X$ and the codomain of $f$ is $Y$. All of the other interesting properties of arrows (for example that I could compose $f:X\to Y$ with an arrow $g:Y\to Z$ to get an arrow $g\circ f:X\to Z$) are already encoded in the axioms of the category $\mathcal{C}$, and there's no need to say anything further to define arrows.

Since comments are not permanent, I just want to edit in the link from Ethan Bolker's comment, to an excellent answer with a similar viewpoint to this one in reply to a similar (in spirit) question about "what actually is a polynomial?" The second paragraph in particular really captures what I wanted to say in my answer, (paraphrasing Ethan's answer) what really matters isn't what something actually is, but rather how it behaves.

$\text{Hom}_C(A,B)$ can be literally any set you want and has nothing at all to do with functions $A \rightarrow B$, as long as you define what "composing" arrows means and there is an identity arrow for each object you have a category, your set of arrows can be literally any set you want. Same goes for your collection of objects. Just to get my point across (risking sounding ridiculous) I will give an extreme example.

I can define a category $\mathcal C$ where there are two objects, "Apple" and "Banana" and we define

We define composition in the only way possible letting $*$ be an identity arrow for both "Apple" and "Banana".

Here an arrow in $\mathcal C$, $\text{Apple} \rightarrow \text{Banana}$ is a natural number.

An example of a collection of objects and arrows that does not form a category (again, at the risk of sounding ridiculous) is if the objects of $\mathcal D$ is the people on earth and an arrow $X \rightarrow Y$ is a date that $X$ has shaked $Y's$ hand on. Yesterday I met my professor so there is an arrow $$\text{(27th of march 2020)}: \text{Noel} \rightarrow \text{Noel's professor}$$

I recall a really fun talk at a topology conference sometime in the late 1980s/ early 1990s. The speaker said "we're going to take as objects in a category the set of finite collections of evenly-distributed points on the $x$-axis between $x = 1$ and $x = 2$ -- we might have 3 points or 12 points or ...whatever."

OK, so far I was following him. Then he said "and a morphism in this category will be a braid arranged thus": 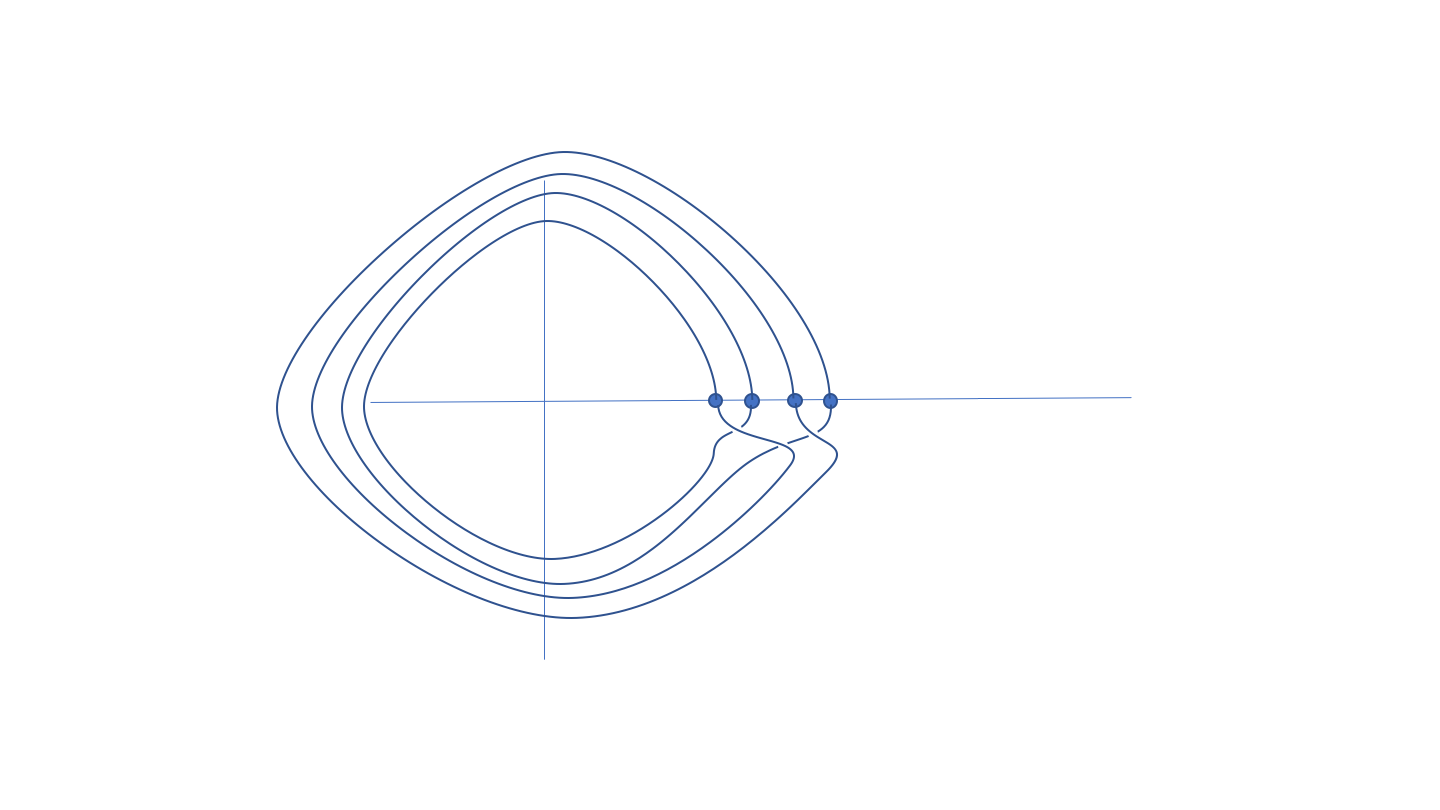 where the locations and directions of over- and under-crossings was arbitrary. He then went on to talk about natural transformations from this category to various others, developing knot polynomials in a remarkably abstract way. I have no idea whether anyone still does this sort of thing, but at the time, it was kinda mindblowing to see something so very concrete as a 'morphism'. I leave it to you to guess how composition of morphisms was defined...

So for categories, the set of arrows is literally just any set and any element of that set is called an arrow. Maybe for convenience you want your arrows encoded as ordered pairs but the definition doesn't force any particular encoding on you.

P.S. Actually you probably don't want your arrows to be ordered pairs because often ${\rm Hom}(A,B)$ has multiple elements whereas there is only one ordered pair $(A,B)$. Maybe for posets this is an OK encoding though.

Given two objects $A$ and $B$, there is an associated set/class (depending on your definition) $\operatorname{Hom}_\mathcal{C}(A,B)$ of morphisms $A \to B$. An arrow is just such a morphism, i.e. an element of this set/class.

To respond to your first remark, the collections $ob(C)$ and $arr(C)$ are what we call $\textbf{classes}$. Naively, this means that we can think of them each as a "set," except that they do not necessarily obey the axioms that are necessary to describe them as a set in the formal sense. If this feels wishy-washy to you, that is because it is. For a more satisfactory definition, you might be interested in looking through Categories for the Working Mathematician, by Mac Lane.

For categories which we call $\textbf{small}$, the classes $ob(C)$ and $arr(C)$ are actually sets, and then an arrow is just an element of the set $arr(C)$ which satisfies the formal properties that are outlined in the definition of a category.

Not the answer you're looking for? Browse other questions tagged category-theory soft-question definition philosophy or ask your own question.

155
What actually is a polynomial?

12
Axiomatic Definition of a Category
11
Is there an accepted term for those objects of a category $X$ such that for all $Y$, there is at most one arrow $X \rightarrow Y$?
8
What is a nice "naturally occurring" example of an arrow category?
6
What does "dual statement" mean exactly in category theory?
4
What exactly are the meaning of the followings in the definition of a category?
3
Does the category with two objects, one arrow exist?
0
Questions on defining Functors as a type of map of generalized elements
1
What are the final objects of the $Arrow(Set)$ category?