Triangle congruence when the longest sides, the largest angles, and one of the other sides are congruent?

Here is a counterexample, not for the problem above, but for the general side-side-angle case where shows side-side-angle in general is not a sufficient condition for congruence of two triangles.

Here is a close answer on StackExchange, but it still doesn't answer my question.

We want to prove that given the largest and the smallest sides of a triangle along with the measure of its largest angle, we can construct one and only one such triangle.

(an interesting but irrelevant question may be "What is the smallest possible measure of the largest angle in an scalene triangle given the size of its largest and smallest sides?"---can be solved using the sine rule)

Now we take the last step in constructing the triangle by drawing an arc centered at B with a radius $r$ which equals the length of the longest side BC. Then, we claim that we can uniquely find the third vertex C of the triangle where the arc intersects the ray AC.

The arc shall not intersect the ray AC in more than one point because that would require the arc to intersect the side AB as well which implies that the side AB is longer than the side BC which contradicts our assumption. Thus, the point C is unique. 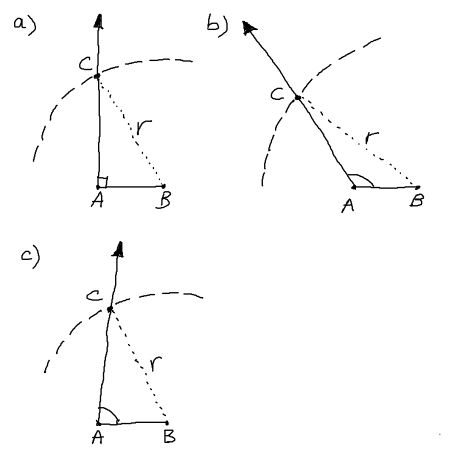 As an argument for the uniqueness of C, we can use sine rule. With your notation, $$\frac{\sin|\angle ACB|}{|AB|}=\frac{\sin|\angle BAC|}{BC}$$ As $AB$ is the shortest side, it is opposite the smallest angle. In particular, we must have that $ACB$ is acute, so sine rule uniquely determines it. So we can then determine all the angles, and all the sides.

Your construction can produce two choices for C if $|\angle BAC|\leq \frac{\pi}{2}$. But one of the points will give $|AB|\geq |AC|$, so won't give the prescribed triangle.

Not the answer you're looking for? Browse other questions tagged geometry triangles congruences-geometry or ask your own question.

1
help with trying to prove why having two sides and any angle is insufficent proof for congruence.

1
Prove triangles formed by two midpoints and an altitude are congruent
5
How is the hypotenuse the longest side of any right triangle?
0
Sides of triangle are in A.P., find its perimeter
0
Proof of the ASA triangle congruence criterium
1
Geometric Construction Problem: Why are the segments congruent?
4
Can a triangle be divided into four similar triangles such that not all four of the triangles are congruent to each other?
3
If we know the congruence of the apex and the base of two isosceles, are both congruent triangles? (help with the proof)