How can I calculate the minimum number of moves needed in a game involving stacks?

I'm currently programming a game, and I have been stuck on the following problem for a while. 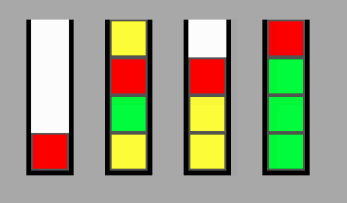 The above figure is a set of stacks. The end-goal is to sort all items by color in the least possible number of moves. For a gameboard like above, computing the solution doesn't take long at all. The problem occurs when the board grows in size, with the maximum board being 8X8 (8 stacks, and 7 colors, with one empty stack) The final solution doesn't need to be exact, the main goal I have is something that's fairly close to the minimum number of moves.

The algorithm I am currently using starts with all of the pieces sorted, and then works backwards to generate the game state.

I currently have a scoring function in place.

Each move is scored, and then all of the top scoring moves go on to the next round, this doesn't always lead to a minimum score however, and sometimes it becomes cyclic. In order to combat this, I also take a random sample of ~50 game states from the next 3 highest scoring sets. For a 4X4 game, this works great, and runs in milliseconds. When the game increases in size, the time complexity grows exponentially.

Are there any edge-cases I'm missing that might speed this up, or perhaps some algorithm that already exists for solving this problem?

I think the approach I'm taking is decent, but the appearance of cycles has me wondering if I can translate this into a graph problem, and use something like Dijkstra's algorithm on it.

Yes, you can formulate this as an $s$-$t$ shortest path problem in a directed graph with a node for each state and an arc from node $i$ to node $j$ for each possible transition. The starting state is the source node $s$, but you have multiple ending states. Introduce a dummy sink node $t$, and for each ending state, introduce an arc to $t$. Now apply Dijkstra's algorithm.

Not the answer you're looking for? Browse other questions tagged graph-theory algorithms dynamic-programming network-flow scoring-algorithm or ask your own question.