Here is the problem:

A light inextensible string of length 40cm had its upper end fixed at a point A, and carries a mass of 2kg at its lower end. A horizontal force applied to the mass keeps it in equilibrium, 20cm from the vertical through A. Find the magnitude of this horizontal force and the tension in the string.

Ok so firstly I don't understand why it needs to have a horizontal force to keep it in equilibrium when it's attached to a fixed point?

I've drawn a diagram and tried to use Lami's Theorem but I've got too many variables I think and I can't see how the position of the force is going to be helpful?

Any pointers greatly appreciated, thank you!

If there were no force the weight would hang straight down. When you push horizontally, you move the equilibrium to the side. You have three forces, gravity on the mass, which is downward, the horizontal force, and tension in the string, which is along the string. These have to add to zero. You can separate the two directions. The tension horizontal and vertical values are related by trig functions of the angle of the string. 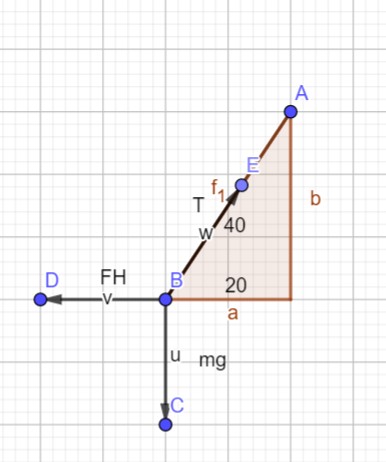 These problems are often easier when you split them into the horizontal and vertical components.

Not the answer you're looking for? Browse other questions tagged trigonometry classical-mechanics or ask your own question.

0
Simple Forces - Finding Force and Tension for self learner
0
How find angle to horizontal of hanging string
0
Static Equilibrium problem
2
Finding the acceleration of a system
0
Angular rotation where radius is unknown
0
How to determine the direction of tension?
2
Need Help With A Friction Problem (Mechanics)
1
Simple Statics Force diagram problem using moments.