Why is logistic equation called "logistic"?

However, I was not able to find why any of these things are called "logistic".

The fact that the name was "given by Verhulst" does not explain why it was given. Usually people pick names for a reason, but maybe Verhulst was an exception. Ok, I looked at the French wikipedia, which states "Le nom de courbe logistique leur a été donné par Verhulst sans que l'on sache exactement pourquoi." - "The name "logistic curve" was given to it by Verhulst, but no one knows exactly why". The reference rasch.org gives the following commentary:

"Verhulst writes "We will give the name logistic [logistique] to the curve" (1845 p.8). Though he does not explain this choice, there is a connection with the logarithmic basis of the function. Logarithm was coined by John Napier (1550-1617) from Greek logos (ratio, proportion, reckoning) and arithmos (number). Logistic comes from the Greek logistikos (computational). In the 1700's, logarithmic and logistic were synonymous. Since computation is needed to predict the supplies an army requires, logistics has come to be also used for the movement and supply of troops. So it appears the other meaning of "logistics" comes from the same logic as Verhulst terminology, but is independent (?). Verhulst paper is accessible; the definition is on page 8 (page 21 in the volume), and the picture is after the article (page 54 in the volume). "

(Cross-posted from History of Science and Mathematics: source of “logistic growth”?)

As stated above, the term logistic is due to the Belgian mathematician Pierre François Verhulst, who invented the logistic growth model, and named it logistic (French: logistique) in his 1845 "Recherches mathématiques sur la loi d'accroissement de la population", p. 8:

We will give the name logistic to the curve

He does not explain why he uses this term, but it is presumably by analogy with arithmetic and geometric, and in contrast to logarithmic, as in figure below (from the original paper).

The French term logistique is from Ancient Greek λογιστικός (logistikós, “practiced in arithmetic; rational”), from λογίζομαι (logízomai, “I reason, I calculate”), from λόγος (lógos, “reason, computation”), whence English logos, logic, logarithm, etc. In Ancient Greek mathematics, logistikós was a division of mathematics: practical computation and accounting, in contrast to ἀριθμητική (arithmētikḗ), the theoretical or philosophical study of numbers. Confusingly, today we call practical computation arithmetic, and don't use logistic to refer to computation.

Verhulst first discusses the arithmetic growth and geometric growth models, referring to arithmetic progression and geometric progression, and calling the geometric growth curve a logarithmic curve (confusingly, the modern term is instead exponential curve, which is the inverse), then follows with his new model of "logistic" growth, which is presumably named by analogy, after a traditional division of mathematics, and in contrast to the logarithmic curve. The term logarithm is itself derived as log-arithm, from Ancient Greek λόγος (lógos) and ἀριθμός (arithmós), the sources respectively of logistic and arithmetic.

There is no connection with logistics (1830), which is instead from logis (lodging), and was military jargon. 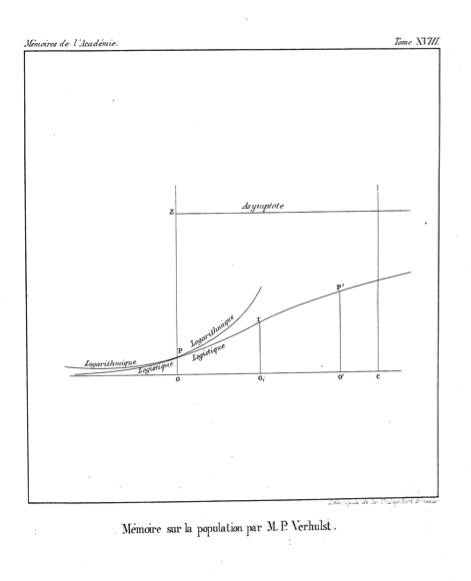 8
Why are they called "Isothermal" Coordinates?
11
Why is $i$ called "imaginary"?
38
Why is the topological pressure called pressure?
24
Why are "algebras" called algebras?
2
Why is it called a 'cofactor', and is there some intuition or geometric interpretation?
18
Why are numerator and denominator called so?
9
Why are the hypergeometric functions called "hypergeometric"?
2
Why are the p-adic Integers $\mathbb{Z}_p$ called integers?