Why is it enough for a Tangent Plane to only agree with the slope of an $m$-input function in $m$ directions?

Why is it enough for the tangent plane to only agree with the slope of a differentiable 2-input function in the $x$ and $y$ directions at a certain point for it to agree in every direction at that point?

Isn’t it still possible for the function to cross the tangent plane, even if their slopes agree in the $x$ an $y$ directions, when we move in some other direction?

Say we have some two-input differentiable function $f(x,y)$ defining some surface in 3D space. The input into the function is $(x,y)$ coordinates, and the output of the function is the height of the surface (or hill) at each input point.

For a plane to be tangent to a function at $(x_0,y_0)$, it means it only touches the surface at that point, and doesn't cross the surface anywhere.

I'm aware that two slopes, one in the $x$ and one in the $y$, uniquely define a single plane at that point.

However, there are an infinite number of functions that may have those slopes at that point.

If it didn't agree with the slope of the function at that point in some arbitrary direction, then were we to draw lines in that direction on both the "tangent" (not actually tangent) plane and the function, those lines would intersect, and thus the plane wouldn't be brushing the surface at only a single point, and it wouldn't be a tangent plane.

Why is it enough for the tangent plane to only agree with the slope of a differentiable 2-input function in the $x$ and $y$ directions at a certain point for it to agree in every direction at that point?

Isn’t it still possible for the function to cross the tangent plane, even if their slopes agree in the $x$ an $y$ directions, when we move in some other direction?

I'd like to be able to see the answer intuitively...but I can't, and I need help. 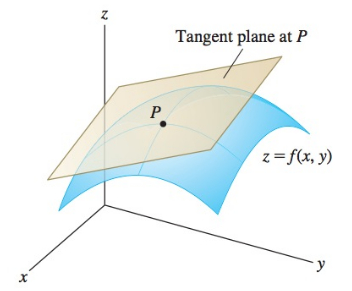 I added this as a comment to David's answer below, but I'll add it as part of the question too, as I think it may help communicate what I'm trying to "see".

If a tangent line agrees with the slope $2x$ at a certain point...well, there's only one slope to agree with, so I KNOW that the line will be tangent.

But, how can I intuitively "see" that lines drawn on the plane in ANY direction will be tangent to the function at that point? 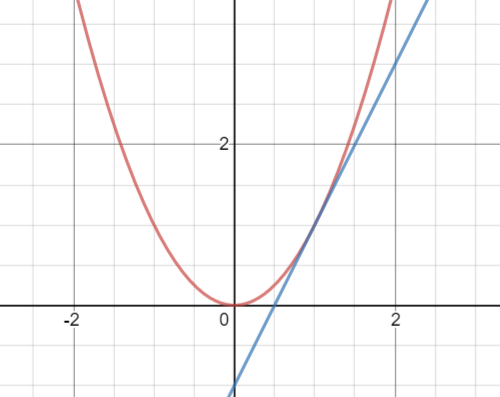 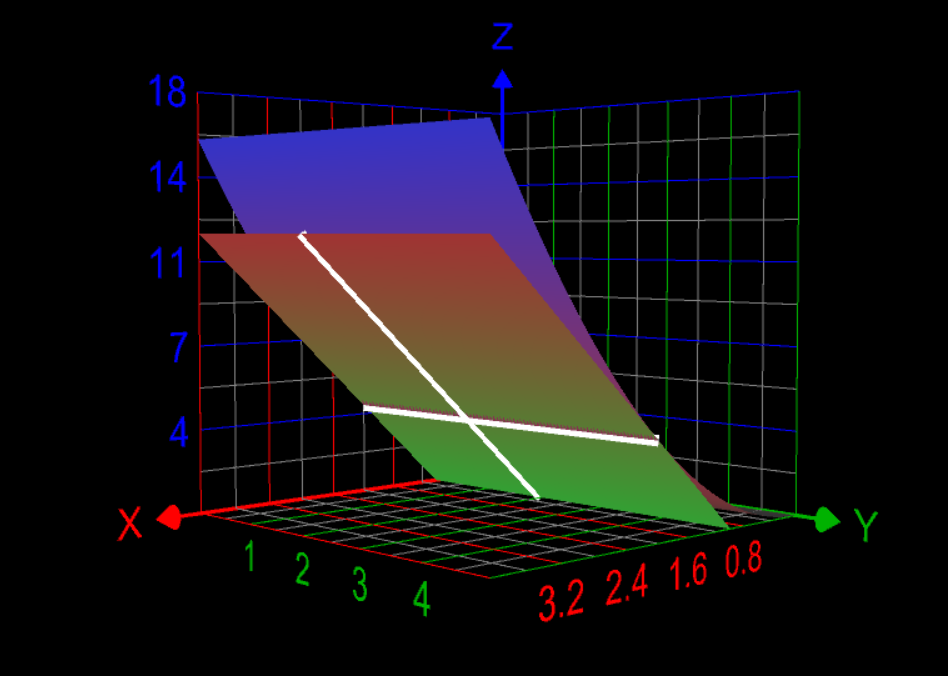 Why was the slope agreeing in the $x$ and $y$ directions enough to define the tangent plane?

After watching some of Ted's (in the comments) lectures on YouTube, I've realized that when I asked this question, although I had an intuitive "feel" for differentiability in one dimension, I hadn't really thought enough about what it meant in higher dimensions.

Differentiability (for a two dimensional surface) means that the function is locally flat.

Therefor, it must agree with the slopes of $f(x ⃗ )$ in every direction at $a ⃗$, not just the $m$ Cartesian directions, for which we have the partial derivatives of $f(x ⃗ )$.

(Each of the $x_i$'s are orthogonal Cartesian coordinates, they're the components of the input vector $\vec{x}$, and each of the partial derivatives above are evaluated at $\vec{a}$).

This is because given the $m$ partial derivatives of $f$ at $\vec{a}$, there’s only one unique hyper-plane approximation for $f(x ⃗ )$ which can be defined!!

My original question was why this implied that the tangent plane agreed with the slopes in every direction.

It's entirely possible for this "tangent" (in quotations because in this case, it's not actually tangent) to agree with the slopes in the $m$ Cartesian directions, but not in every direction (Ted has some good examples in the lectures referenced in the comments, and here's a picture from "Math-Insight"). 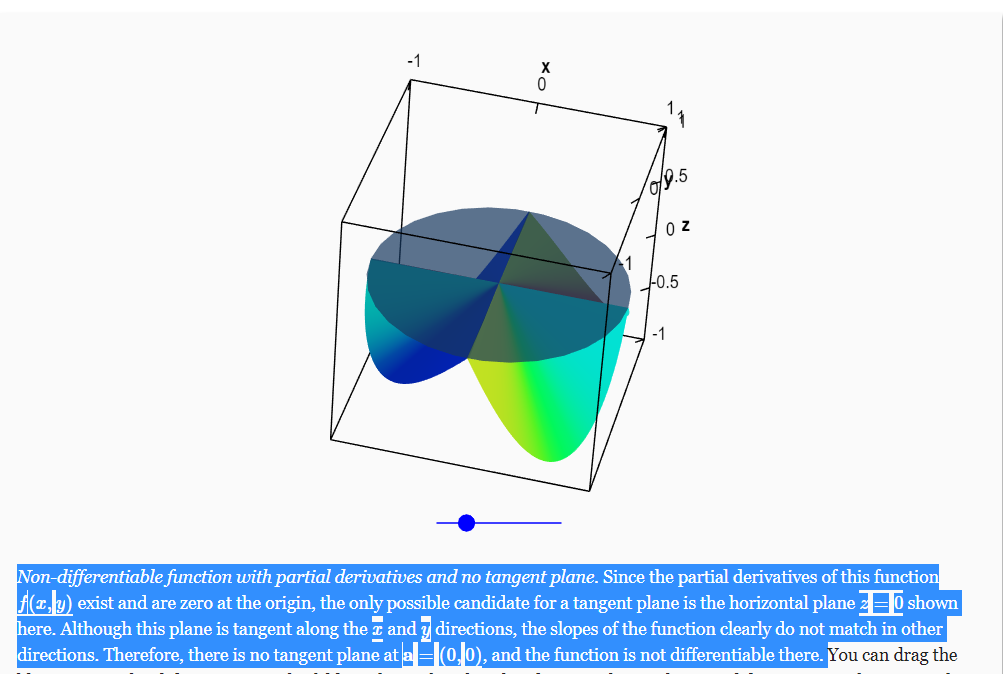 However, if that unique “tangent” plane doesn’t agree with the function’s slopes in every direction (not only the Cartesian directions) that just means that the function isn’t differentiable at $a ⃗$!!! In other words, at $\vec{a}$ the function isn't locally flat.

To prove that a function is differentiable at $\vec{a}$, we attempt to build a "tangent" plane at that point by making it agree with the slope of our function in the $m$ Cartesian directions, and then show that the "tangent plane" indeed is a tangent-plane by showing that...

In his videos, Ted shows an example of this (with the difference that in his example, $T(\vec{x})$ is not a tangent plane but a linear approximation passing through the origin, although the idea is the same.)

For a longer answer, there are a few things to say.

Second, one might well wonder what is the meaning of the tangent plane. A good answer to this requires the following standard definition of multivariable calculus:

Assuming that $f(x,y)$ is indeed differentiable at $(a,b)$, it is a theorem of calculus, which you should be able to find in any calculus book, that for any unit vector $\vec u = \langle s,t \rangle$, the directional derivative of $f$ in the direction $\vec u$ is equal to the value $L\langle s,t \rangle$. From this, one can define the tangent plane to be the graph of the function $z = f(a,b) + L\langle x,y\rangle$, and then it is a theorem that the slope of the graph of $f$ in any direction is equal to the slope of the tangent plane in that direction.

But as a reminder, all of this depends on the function being differentiable in the first place. Fortunately we have lots of ways to know that a function is differentiable without having to check its slope in every possible direction, just as we don't have to do another delta-epsilon proof on every single differentiable function we deal with in single-variable analysis.

I hope this could help.

I've been looking for an intuitive answer as you did

Unfortunately, i didn't find anything, so posting my own answer

Here what I came up to by careful analysis

Here we don't have anything telling us neither about directions nor about orientation.

We rely only on some 'closeness' notion.

To get directions, we have to consider directional derivatives.

Now we're interested not in algebraic definition, but in geometric behaviour.

Here we don't take the entire 'hyperplane' for L, we just take $e$.

If we do transofrm those $e_1$ and $e_2$ with L, we'll get them lying on another still straight line, as vectors were straight, L is linear, so everything kept straight.

Note, we had only left and right orientation, positioned on a line in this case.(x-y plane)

Now consider a derivative of function of two variables and let's apply the same logic.

That's why no matter which direction you're moving (and you're allowed to move ONLY in domain of L, it's important), the rate of change will always lay within a plane.

If a derivative exists, of course.

I have the same doubts as you. I don't know what kind of books to get the experience of its development.Intuitively, how to judge a tangent has only one intersection point with the function. Then how to judge whether the plane is also applicable. If the surface is regarded as the deformation of the tangent plane from a certain point, it can be confirmed that there is only one point in contact with the surface.In other words, there is only one intersection point between any straight line at this point on the plane and the curve in a certain direction of the surface.Can I state that my minimum acceptance is a tangent plane (a plane)?

Sorry, I don’t know how to zoom in the formula. It looks crowded

Not the answer you're looking for? Browse other questions tagged calculus geometry multivariable-calculus differential-geometry vector-analysis or ask your own question.

1
Why does the gradient point at direction of maximum slope only?
2
Slope of curve of intersection with surface and plane x = 2
0
Why is a plane needed to represent something tangent to a point with two inputs rather than a line?
0
Slope of the tangent
0
Computing the gradient knowing directional derivatives
0
Tangent plane of a surface and a curve
5
Why $f(x) = x^2$ has variable derivative but its tangent has constant slope?
1
How to find the equation of tangent plane?