Is it always possible to draw an ellipse given any two points and the center?

I have 2 points and I want to draw an ellipse that passes through those points.
I also have the center of the ellipse.

My question is: is it always possible to draw such an ellipse?

When trying to automatically render ellipses for information visualization, I tried calculating the radiuses $a$ and $b$ by solving the two-equation system. However, sometimes $a^2$ or $b^2$ would be negative and, therefore, $a$ or $b$ would return me $NaN$.

Edit2: I'm sorry, I made it seem like a completly theoretical question but in fact I need to overcome this limitation. The suggestion in the comments involves a "tilted ellipse", but how exactly can I get its parameters with two points and the center?

As other answers have pointed out, it’s not always possible to draw an axis-aligned ellipse with center $C$ that passes through the points $P_1$ and $P_2$. If you relax the axis alignment requirement, then if the three points $C$, $P_1$ and $P_2$ are not colinear it’s always possible to draw an ellipse; it will in general not be axis-aligned, however. In fact, there is an infinite number of such ellipses.

As you’ve noted, one possibility is to take the line through $C$ and the farther of the two other points from it as the major axis. The parameters of the ellipse can be computed fairly easily by applying a change of coordinates that makes the major axis the $x$-axis and places $C$ at the origin.

For your example, this produces the following ellipse: 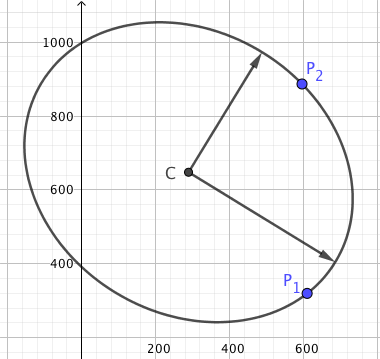 Since the centred ellipse will be symmetric w.r.t. the axes, we can ignore the minus sign and use $Q_1' = (321, 328)$ instead, as that will also need to be on the ellipse. The two points are now both in the first quadrant.

If you connect any two points in the first quadrant of an origin-centred axis-aligned ellipse, you will get a line with a negative slope. Or put another way, one of the points has the largest x-coordinate, and the other then must have the largest y-coordinate. Conversely, if you have any two points with positive coordinates, one with a largest x-coordinate and the other with the largest y-coordinate, then there is an origin-centred axis-aligned ellipse that goes through them.

This is not the case here with the two points $(321, 328)$ and $(307, 239)$. The first point has both coordinates larger than the other. So no origin-centred axis-aligned ellipse is possible through those points.

Edited:As @Oscar Lanzi pointed out if $a^2,b^2$ are negative then we have a hyperbola

1
Are two ellipse arcs always almost identical if they have the same end points and the same center of ellipses?
0
How to draw an ellipse with its center and two points on it with with Sketchpad?
3
Ellipse center with three points and the semi-axis lengths given
0
Determining center of Ellipse with limited Data Points
0
If any two chords be drawn through two points on the major axis of an ellipse equidistant from the center
1
equation of an ellipse given its center and two tangent lines
0
Finding point on ellipse given center point and point outside the ellipse
0
Ellipse with two vertices and the center.
1
Given directrix, eccentricity, and focus get center of ellipse