How does naive vertex classification via color refinement induce a ranking on the vertices of a Graph $G$?

Color refinement, also known as naive vertex classification or 1-dimensional Weisfeiler-Lehman algorithm, is a combinatorial algorithm that aims to classify the vertices of an undirected simple graph $G = (V,E)$ with set of vertices $V$ and set of edges $E\subseteq V \times V$ by similarity.

On the other hand, a graph labeling is a function $$l : V \rightarrow S $$ to some ordered set $S$, such as the real or integer numbers. Since $S$ is ordered, $l$ induces a weak ordering on the vertex set $V$, which can be used to construct a ranking of vertices in $V$. The ordering is weak (instead of total) since $l$ might not be injective and therefore there might be ties, but let us not worry about this and allow ties in our vertex ranking.

I have read in a paper (see below) that the Weisfeiler-Lehman algorithm can be used to construct a labeling $l$ on a graph and therefore can be used to induce a weak ordering on the vertex set $V$.

My question is: how can the Weisfeiler-Lehman algorithm be used to construct a graph labeling $l$? I only see that the algorithm classifies vertices according to their color, but I cannot see any obvious/canonical/natural way to "order" the colors to create some kind of hierarchy between different classes of colors.

The paper I was referring to is:

Any insights and hints are greatly appreciated!

The short answer is that the refinement process acts on the colours in a particular (arbitrary) order, and that determines the order of the labels. 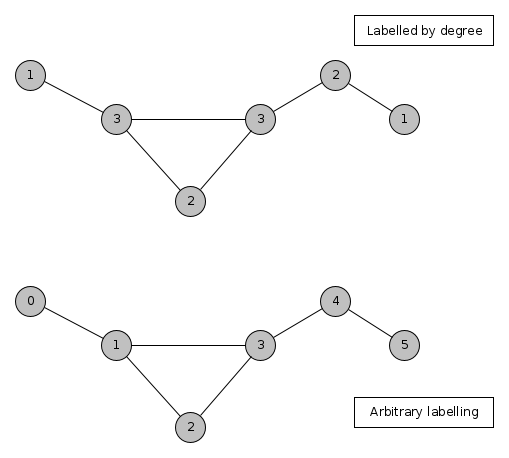 The initial degree partition is [[1, 3], [2, 4], [0, 5]] - as you can see, the cells of the partition are ordered by degree. As cells are 'split' into new cells, they are put back into the partition in order of the invariants used to split.

The papers describing nAUTy go into more detail, and there is a visual overview on http://pallini.di.uniroma1.it/Introduction.html for traces.

Not the answer you're looking for? Browse other questions tagged graph-theory algorithms coloring graph-isomorphism or ask your own question.

2
Sequential algorithm for coloring graphs- there exists an ordering of vertices where it finds a coloring with $\chi(G)$ colors.
1
Is there a name for this graph density measure?
4
$k$ Dimensional Weisfeiler-Lehman Method
0
How many ways to color a graph with 10 colors
4
How may an algorithm always color optimally connected bipartite graphs?
4
If a graph has a chromatic number $k$, then for any color there is a vertex of that color that has as neighbors all the other colors
4
Graph on $n$ vertices, each vertex of degree 3 or less. Can we color the vertices in a way such that...
2
Is there a sequence of vertices for which this greedy coloring algorithm works?