Can we place $18$ points in a regular hexagon of side $2$ such that the minimal distance between points is $>1$?

Can we place $18$ points in a regular hexagon of side $2$ such that the minimal distance between points is $>1$?

Thank you for your interest!

One of approaches to the proof, started by Hagen von Eitzen is to localize positions of points in a solution. This approach was inductively used to solve a similar problem below. I proposed it at the final stage of All-Ukrainian student mathematical olympiad in 2001. No participants achieved an advance solving the problem. Also I found this problem (without a solution) in a book “How nonstandard problems are solved” by A. Ya. Kanel'-Belov and A. K. Koval'dgi, (Moskow, MCNMO, 1997, in Russian), see Problem 15 at p. 49.

In a cube $Q$ with an edge $1$ are placed $8$ points. Whether always among them there exist two points placed at distance at most $1$? 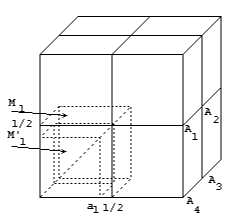 Not the answer you're looking for? Browse other questions tagged geometry euclidean-geometry combinatorial-geometry or ask your own question.

1
When is the hexagon formed by the feet of perpendiculars and the midpoints of sides regular?
15
What regular polygons can be constructed on the points of a regular orthogonal grid?
4
Maximizing distance between points
2
Maximum number of points at distance exactly one where distance between points is at least 1
7
For which dimensions does it exist a regular n-polytope such that the distance of its vertex to its center equals the lenght of its side?
2
Find the two points with the maximum distance in a sector of a unit disc
2
$14$ points in a regular hexagon of side $2$