Ramified primes, as defined by Neukirch

In ch. I, §8, p. 49 of the English translation of $\textit{Algebraic Number Theory}$, Neukirch states the following (I paraphrase, but retain his notation):

Let $L/K$ be an extension of number fields, and let $\mathcal{O}$ and $\mathcal{o}$ be their respective rings of integers.

But $(\mathcal{O}/\mathfrak{P}_i)/(\mathcal{o}/\mathfrak{p})$ is a finite extension of finite fields, so will it not always be separable? Why is this included in the definition?

Below I have included the excerpt from the book I am referring to. 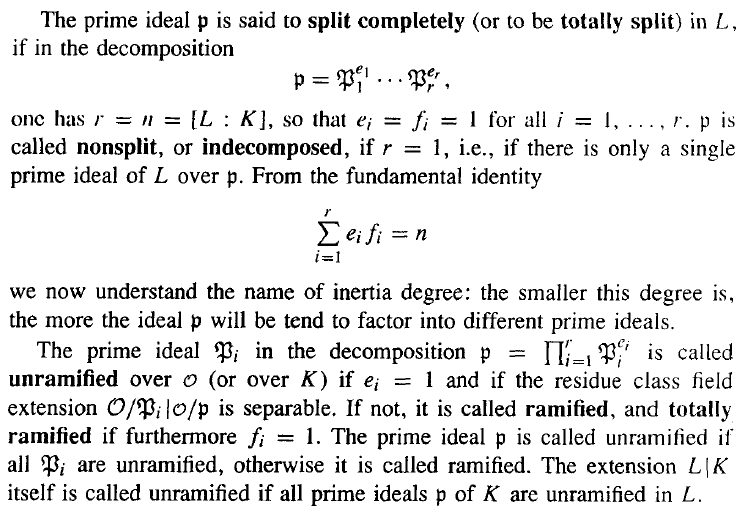 Thank you for your attention.

Now if the assumption was only included for formal reasons (because he did not want to assume that finite fields are perfect), then why would he repeatedly refer to the separability of the residue field extension as a "special case"?

I took a look at the corresponding section in the book. Although the end goal is of course to apply all this to number fields, this is actually not the assumption in that section. Neukirch works at the level of generality of Dedekind domain, not rings of integers of number fields. And in that more general case, the residue fields don't have to be finite, and the inertia extension does not have to be separable.

Given your interest in L-functions you should look at the finite extensions of the $p$-adic integers $\Bbb{Z}_p$. The main point is Hensel lemma: if $f\in \Bbb{Z}_p[x]$ and $f(a)=0\bmod p,f'(a)\ne 0\bmod p$ then there is $b\in \Bbb{Z}_p$ such that $b=a\bmod p, f(b)=0$. This is what makes $p$-adic fields much simpler than $\Bbb{Q}$, because we can use this to classify all the extensions and connect some apparently very different fields. In the general setting we replace $\Bbb{Z}_p$ by $\varprojlim O/\mathfrak{p}^n$ where $\mathfrak{p}$ is a non-zero invertible prime ideal of $O$ (corresponding to a discrete valuation). The unramified condition is what we need to ensure the extension is generated by the lift of some roots of separable polynomials $\bmod \mathfrak{p}$. And we can understand $O$ by looking at $\varprojlim O/\mathfrak{p}^n$ for each prime ideal.

Not the answer you're looking for? Browse other questions tagged abstract-algebra group-theory ring-theory galois-theory algebraic-number-theory or ask your own question.

6
Find primitive element such that conductor is relatively prime to an ideal (exercise from Neukirch)
13
Primes of ramification index 1 with inseparable residue field extension
2
Neukirch ANT I.9.4: Surjective morphism $G_\mathfrak{P} \to G (\kappa(\mathfrak{P})|\kappa(\mathfrak{p}))$
6
Difference between Milne's and Neukirch's proofs of the fundamental identity $\sum_{i = 1}^{r} e_if_i = n$
1
Extension of $\mathfrak{p}$-adic valuation
2
Comparing the global and local galois groups of an extension of number fields
1
The Frobenius automorphism of a number field extension
4
Galois group of residue field extension