Does the Central Limit Theorem only apply to the sample mean?

My question: Is it only the probability distribution of the sample mean statistic of a sample which is normally distributed according to the Central Limit Theorem, or, will any statistic work like for example the sample variance?

My lack of clarity comes from reading the things below.

"A sampling distribution is the probability distribution of a given random-sample-based statistic." - Wikipedia.

"Central Limit Theorem (CLT) establishes that, in some situations, when independent random variables are added, their normalized sum tends toward a normal distribution even if the original variables themselves are not normally distributed." - Wikipedia.
(Makes it seem the CLT only works for the sampling distribution of the sample mean statistic.)

But then when I search for "the CLT" on the internet I find pictures like these: 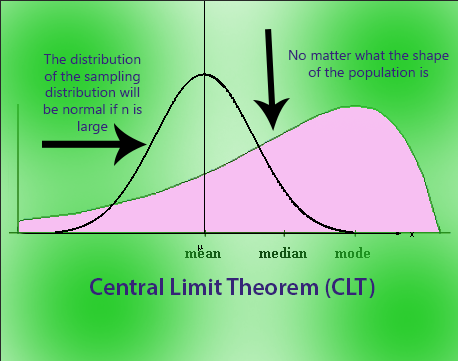 Yes, the CLT only works for the sample mean.

The second diagram you have given is not clear, but the sampling distribution they refer to is the distribution of the sample mean.

Not the answer you're looking for? Browse other questions tagged statistics central-limit-theorem sampling or ask your own question.