I am working on my Senior Thesis for my Bachelor's Degree in Mathematics. My project involves Japanese San Gaku problems, and moving said problems from Euclidean Geometry to Spherical and Hyperbolic Geometry.

I've been working on a particular problem for weeks now. The problem is stated as follows:

I have worked very hard on this and have come up with a lot of stuff. One very useful result is the following:

Additionally, I've managed to construct the figure in Geogebra. This is quite a difficult task unless you know what you're doing (which I did not at first!). Here is what the figure looks like after construction.

By equating $AC$ and $A'C'$ in this image, I've been able to solve the problem, but not by hand. After using the Useful Result to rewrite $AC$, and a clever usage of the Pythagorean Theorem to write $A'C'$ in terms of $r$, $r_1$, and $r_2$, I get an algebraic nightmare. Mathematica can solve it for $r$ and provide us with the desired result, but that's a little unsatisfying.

This problem comes from the book Japanese Temple Geometry Problems: San Gaku by H. Fukagwa and D. Pede. I can't find the problem anywhere online, and the "solution" in the back only says "Written on a surviving tablet in the Yagamata prefecture in 1823." If some incredibly smart individual out there could help me come up with a better way of solving this problem, I would be forever in your favor!

Edit. Simplified the derivation. See the Edit History for my previous version. 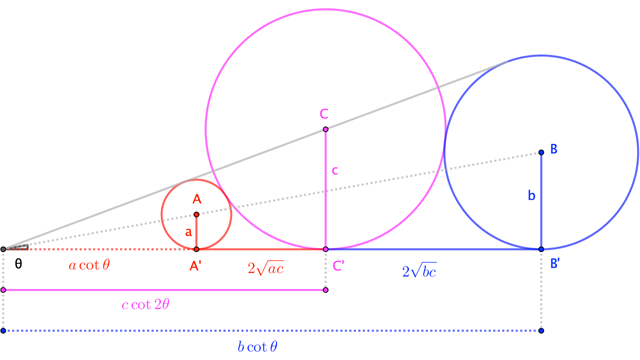 Note. To avoid thinking in terms of linear systems, we can derive the cotangent expressions this way:

The argument is still rather algebraic, but at least it feels a little more geometric.

Not the answer you're looking for? Browse other questions tagged geometry circles tangent-line sangaku or ask your own question.