How are the “corresponding points” of a hyperbola and its auxiliary circle defined?

In case of an ellipse and its auxiliary circle (the circle with major axis as its diameter), the meaning of "corresponding points" is straightforward. Let us consider the following diagram which shows the upper half of an ellipse with its major axis horizontal: 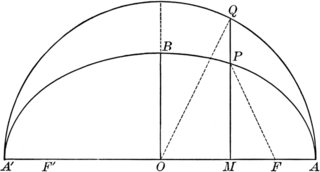 $QM$ is perpendicular to the horizontal. Here $Q$ and $P$ are called as "corresponding points" on the auxiliary circle and the ellipse respectively. And the angle $QOM$ is called the "eccentric angle" of the point $P$.

In case of an hyperbola, I understood that the auxiliary circle is the one which has its centre at the centre of hyperbola (usually origin) and diameter equal to the length of transverse axis. But I don't understand how "corresponding points" are defined in this case.

In my book, a diagram similar to the following one was given in the section "Auxiliary circle of a Hyperbola": 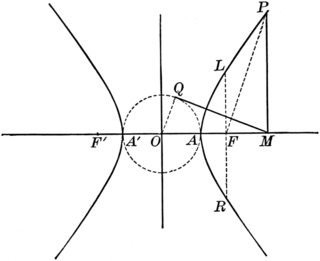 As shown in OP's second figure: From $P$ on the hyperbola, drop a perpendicular to $M$ on the transverse axis, $Q$ be one of the points for which $\overline{MQ}$ is tangent to the circle. (We'll discuss which one of the points below.) Then $P$ and $Q$ are "corresponding points". (So, we've traded "transfer $M$ perpendicularly to the circle" in the ellipse case to "transfer $M$ tangentially to the circle" in the hyperbola case, which makes some sense in a "pole and polar" context.)

As for those ambiguities ... This animation shows the "natural" way of resolving them. As $Q$ travels normally around the circle through Quadrants 1, 2, 3, 4, the corresponding $P$ travels along the hyperbola in Quadrants 1, 3, 2, 4; Quadrants 2 and 3 are "flipped".

Not the answer you're looking for? Browse other questions tagged geometry terminology conic-sections or ask your own question.

6
Normal to Ellipse and Angle at Major Axis
3
Get all points in an ellipse knowing the center, one point, the vertical axis and the horizontal axis
2
Ellipse and hyperbola have the same foci
0
Product of major and minor axis of ellipse
3
Conic sections & eccentricity: known vertical hyperbola, find radius of corresponding circle?
0
Determine conic given two points on the conic and equation of major and minor axis.
0
Given y-coordinates, find corresponding x-coordinates of points known to be on a circle with unknown center and radius
0
What is the name of the circle with minor axis of an ellipse as its diameter?
1
Eccentric angles of points of contact of two parallel tangents in an ellipse
1
Find the eccentric angle of a point on the ellipse $\dfrac {x^2}{4}+\dfrac {y^2}{5}=2$ whose distance from the center is $\dfrac {\sqrt {34}}{2}$.