I've come up with a scenario which reminds me of the Collatz conjecture in that it's a question about the behavior of a system over time.

In detail, after each $t$ increment of $1$, if either $n+t$ or $n-t$ is prime, but NOT both, then set $n\leftarrow n+t$ or $n-t$, respectively. Also, $n$ cannot visit the same prime twice, i.e. can never repeat a value. In the case where $n\pm t$ are both prime but one of them has been visited already, then the other value can be taken. Finally, we're using only the positive integers.

The main question is...

As $t \rightarrow \infty$, will $n$ eventually take every prime value or not?

I recognize this is probably intractable at the moment, as dynamical problems like this seem to be notoriously hard. But you never know, so I figured I'd ask. Barring proof one way or the other, I'm also interested in how it looks heuristically, which I can't figure out.

Without the no-repeats restriction, it seems pretty clear it would tend to hang around $0$ as much as possible, that being where the primes are more concentrated. However, as $n$ travels, it's effectively erasing primes as it goes, which seems to raise the possibility for interesting and unexpected results as the prime topology changes. Maybe the density of removed primes will be sufficient to push $n$ to run away in the limit; my intuition is beginning to lean toward "no" as an answer to my question. However, if the setup is changed so that $n$ will take the smaller of two primes when it has a choice (instead of neither), all indications are that every prime value is visited eventually.

So any insight is welcome, and to reiterate, I would be very happy with a well-reasoned heuristic answer if anyone's got one.

For the record, in order, the first handful of values $n$ takes are

...and a table showing a few of the initial values, illustrating where this is coming from:

Here's a graph of $n$ over the first five million $t$. Note that even after that, only about half of the primes $<100$ have been hit. 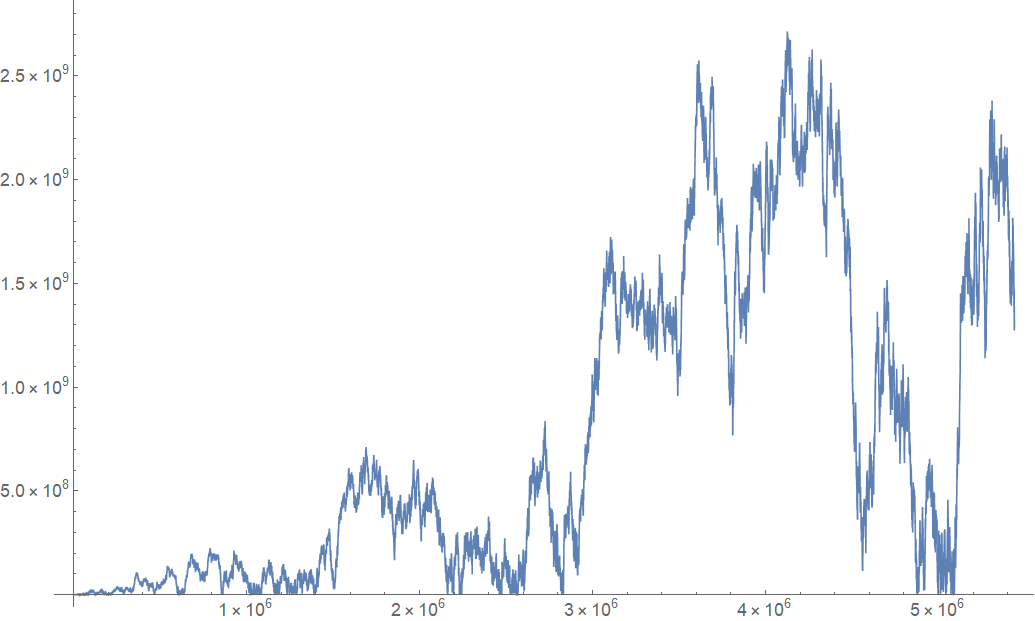 Not the answer you're looking for? Browse other questions tagged number-theory prime-numbers dynamical-systems collatz-conjecture or ask your own question.

2
About Collatz 3n+3?
2
What is known about Collatz like 3n + k?
10
Prime numbers in Collatz sequences
79
Mathematicians shocked(?) to find pattern in prime numbers
3
Collatz Variation: The Prime Frog
1
Collatz-esque Conjecture
5
A conjecture on the closeness of twin primes