Edit: This is a closely related question to my earlier post here: Is there a formula for finding the number of nonisomorphic simple graphs that have n nodes?

I'm working on my first exposure to graph theory with a text that seems to leave some definitions rather open- ended, and solutions to similar problems I've seen online might be contradictory. More specific questions to my subject line question are, in a directed graph, what makes it non isomorphic? Is a set of vertices all isolated included? (some solutions say yes, but how can it then be called 'directed?') Can there be multiple graphs in the answer that have the same number of edges and the same in/ out degree totals, or does a distinct signature of edge # and in/ out degree total constitute a distinct graph?

Edit: The text I'm working with doesn't show any examples of bidirectional simple graphs, so I guess I must assume they're not included...

Edit: Here is what I have thus far with my current understanding: 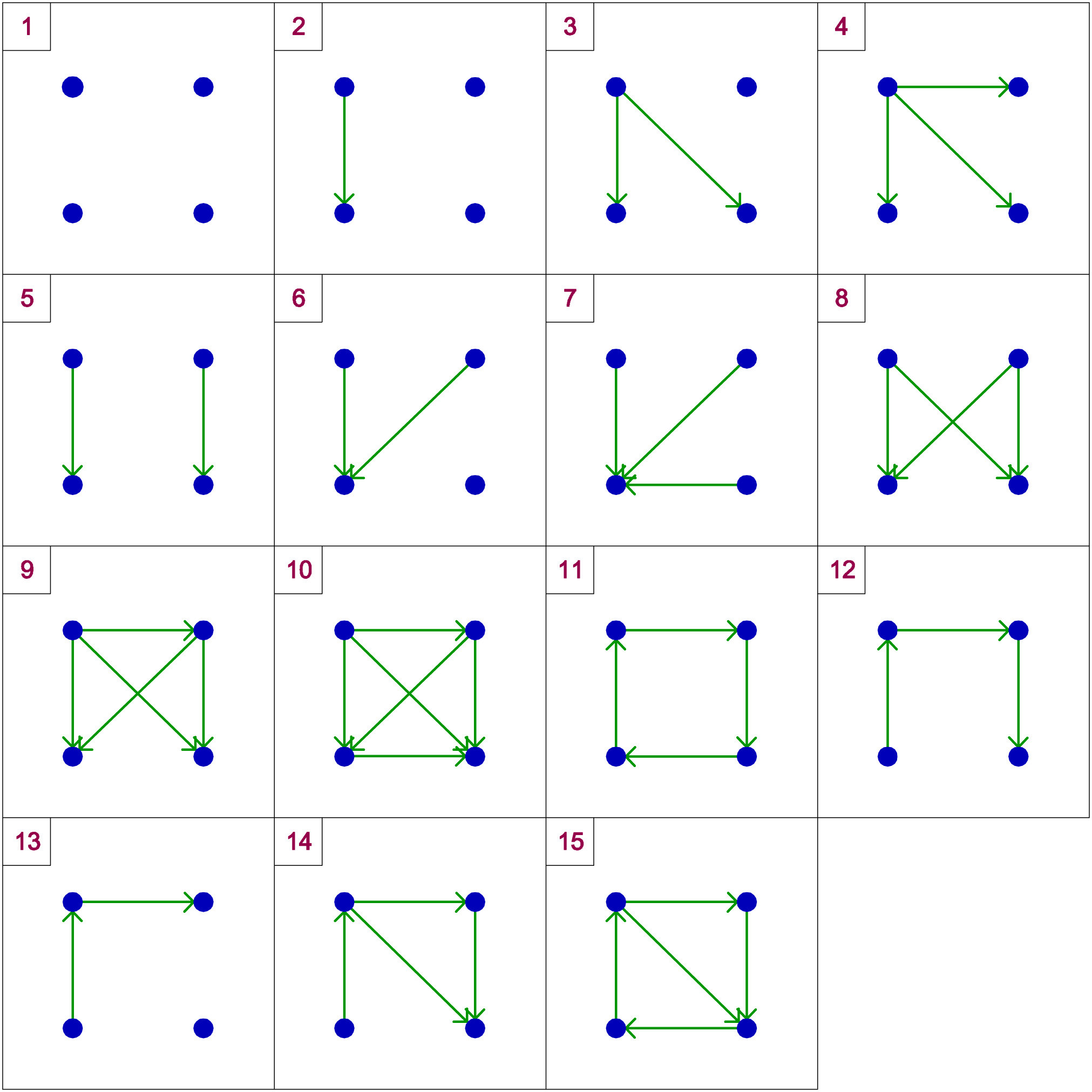 Any guidance would be appreciated. Thanks in advance...

...in a directed graph, what makes it non isomorphic?

In the following example, the two red digraphs have essentially the same digraph: there is one node with two out-edges. An edge-preserving bijection (i.e., an isomorphism) in this case is $1 \mapsto 2$, $2 \mapsto 1$ and $3 \mapsto 3$.

There is no such bijection between the red and blue digraphs since they do not have the same in/out-degree sequences.

Is a set of vertices all isolated included? (some solutions say yes, but how can it then be called 'directed?')

The $n$-vertex null digraph (i.e. $n$ vertices and no edges) is consistently regarded as a directed graph.

How many nonisomorphic directed simple graphs are there with n vertices, when n is 2,3, or 4?

To answer this question requires some bookkeeping. The $2$-node digraphs are listed below. Note that I'm including the possibility of bidirectional edges (i.e., an edge from $A$ to $B$ and an edge from $B$ to $A$).

If I was pressed to find these numbers, I'd get my computer to find them by:

This would be quite an inefficient generation method, but would be fast enough for $4$-node digraphs.

There can be, here's an example:

and one without bidirectional edges:

In the table in the question there's a number of omissions (this is why I'd do it on a computer).

are not isomorphic, since the in/out-degrees don't match. For the same reason e.g.:

are also non-isomorphic. Similar omissions (where we flip edge directions) happen in other cases.

I also don't see a oriented 3-cycles with an isolated vertex.

Multiple questions here - it might be better to unpack them.

Nonisomorphic: I guess the point is to count, for example, A->B and A<-B as isomorphic.

Multiple graphs with same in/outdegree totals: yes it can happen, of course. Inspect "A->B->C" vs "A->B<-C".

There is a formula:$$n = \left\lfloor\frac{v^e}{e!·v}\right\rfloor,$$where $v$: number of vertices, $e$: number of edges, $n$: number of nonisomorphic directed simple graphs.

3
Number of distinct connected digraphs with 4 vertices and 6 edges
6
Is there a formula for finding the number of nonisomorphic simple graphs that have n nodes?

2
Is a directed graph uniquely determined by the in/out degree of each node?
0
Preferential Attachment and salton similarity in directed networks
1
How many nonisomorphic graphs are there with 10 vertices and 43 edges?
1
Number of labeled graphs satisfying a degree sequence
2
How many non-isomorphic simple graphs are there on n vertices when n is...