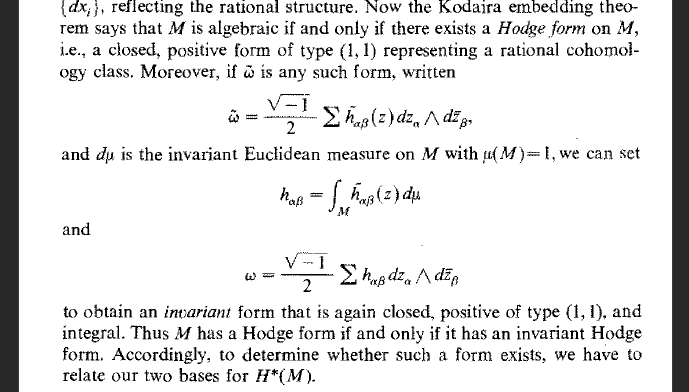 The above text is from Griffiths and Harris. $M=V/\Lambda$ is a complex tori where $V$ is a $n$-dimensional complex vector space and $\Lambda$ is a lattice isomorphic to $\mathbb{Z}^{2n}$ in $V$. We are trying to see conditions required for existence for a Hodge form on $M$. Can someone please explain in the above text assuming $\tilde{\omega}$ a rational form, how does $\omega$ become an integral form on $M$ ? Also does this idea generalize for any Lie group (integrating w.r.t the Haar measure similarly)?

As for your particular question, I think the authors assumed that $\tilde{\omega}$ is integral. They really mean to take a integral multiple of the original Hodge form in Kodaira's theorem.

In general, taking average does not change the cohomology class.

Theorem: $J$ induces isomorphism of on the level of cohomology, and the inverse map is induced by $I$.

So in particular any cohomology class on $M$ is represented by a $G$-invariant form.

Not the answer you're looking for? Browse other questions tagged complex-geometry de-rham-cohomology or ask your own question.